WHO has added ten new cancer drugs, including some pricey ones, to its 2019 Essential Medicines List, which provides global guidance to countries and health systems about drugs deemed most essential to patients and public health systems.

The addition of major new cancer treatments in five categories, melanoma (skin), lung, blood and prostate cancers, reflects both the rapid pace of cancer drug research – as well as the growing need to respond to the worldwide increase in cancers and other non-communicable diseases.

In another long-awaited development, WHO also promoted the drug mifepristone-misoprostol for induced abortions from a complementary list to a more select core list, which together comprise over 450 essential medicines. However, it preserved a footnote saying that the drug should be used “where permitted under national law and where culturally acceptable,” which WHO’s Department of Reproductive Health and Research, backed by the United Nations Population Fund and numerous civil society groups, had requested be removed. However, WHO’s Director General Dr Tedros Adhanom Ghebreyesus ultimately decided to retain the longstanding nod to national and cultural norms, sources told Health Policy Watch.

In a press release, issued Tuesday, WHO said that improved survival rates were a key criteria for including the new cancer therapies as “essential medicines” – even if some of the treatments are costly.

“The inclusion in this list of some of the newest and most advanced cancer drugs is a strong statement that everyone deserves access to these life-saving medicines, not just those who can afford them,” said WHO’s Dr Tedros in the press release. 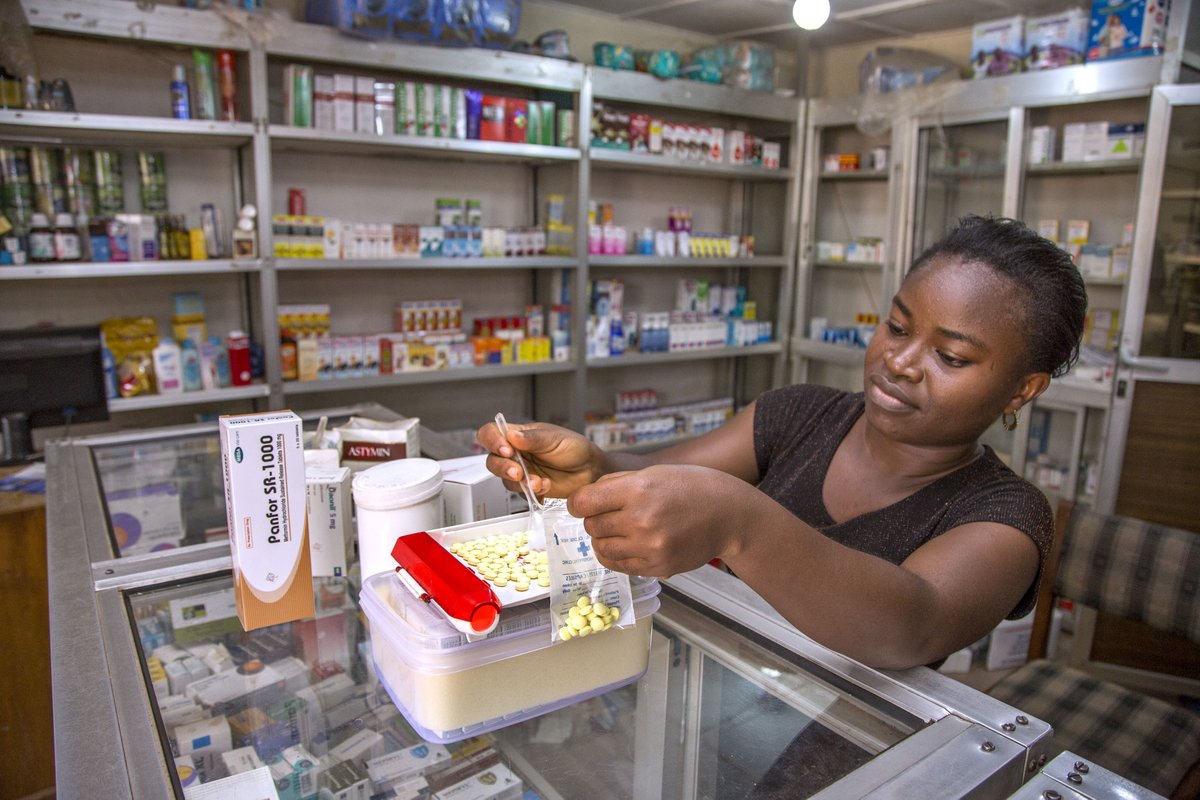 The new cancer therapies included two recently developed immunotherapies (nivolumab and pembrolizumab) “that have delivered up to 50% survival rates for advanced melanoma, a cancer that until recently was incurable,” the WHO release said. The therapies are produced by Bristol-Myers Squibb and Merck & Co.

The publication of the long-awaited update unleashed a wave of reaction from civil society, while sending a ripple through the pharma industry, as winners and losing drug candidates were examined and evaluated.

In South Africa, a coalition of nearly 45 patient advocacy groups said the WHO announcement offers new Health Minister Dr Zwelini Mkhize an “historic opportunity” to save lives by increasing access to one of the new drugs for multiple myeloma on the list, lenalidomide.

“Currently, the majority of cancer patients in South Africa who could benefit from lenalidomide cannot access it due to its prohibitively high cost – depriving many people of a chance at life,” said Salomé Meyer, from the Cancer Alliance in a blog posted online. In South Africa more than 400 new cases of multiple myeloma – a blood cancer of the plasma cells of bone marrow – are reported annually.

Other civil society advocates, however, said that WHO did not go far enough in embracing other cancer drugs that can improve survival rates for people with metastasised cancers.

KEI’s Director James Love told Health Policy Watch that two such breast cancer drugs, pertuzumab and trastuzumab–emtansine [TDM1], supported by KEI for inclusion into the list, didn’t make it, despite what he described as “robust evidence of efficacy.”

“What you now have is a list that has some effective and expensive drugs and not others, with a bias against metastasized cancers,” said Love of of the two breast cancer drugs; KEI had itself proposed inclusion of the trastuzumab-emtansine [TDM1] combination.

The WHO Executive Summary of the Essential Medicines List, on the other hand, said that the Committee had postponed inclusion of the these two breast cancer drugs pending further analysis, because the “large overall survival benefit” of pertuzumab found in one trial of women with metastasized cancers had not been seen in other trials, and for TDM1, alternative options are available on the list.

Dr Nicola Magrini, Secretary of the Essential Medicines List Expert Committee, noted that the new list is growing “rapidly and convincingly” with respect to cancer treatments – and health systems will face serious challenges just in responding to the new cancer drugs that have already been added to the list.

The WHO Expert Committee has also proposed a larger scientific and technical group meeting next year, together with countries and civil society, to discuss current challenges in providing cancer treatments and programs that meet the “expected EML [Essential Medicines List] standards, which are pretty high now,” he said.

Indeed, efficacy is not the only issue involved in the debate over cancer drugs. Another key factor is pricing. As the Executive Summary notes, some of the cancer drugs chosen for inclusion are “high-priced cancer medicines.”

Love of KEI said that some of the rejected cancer drugs also would have introduced competition to drive down prices. He noted that the decision to exclude enzalutamide for treatment of prostate cancer ignores the pricing benefits that its inclusion would generate through competition with abiraterone, a drug that was accepted, but that carries a very high price.

Love said that exclusion of enzalutamide also could undermine efforts such as those by students at UCLA to convince the university to drop a patent suit in India against production of generic versions of the patented drug, marketed as Xtandi. Generic production would dramatically lower the price of enzalutamide, which currently costs around US$ 5,000 a month in India.

Love also noted that since enzalutamide is a monotherapy with smaller active ingredient (API) requirements than abiraterone, it would eventually become much cheaper to manufacture, making it a good option in terms of both efficacy and pricing in the long-term.

See below or here for details on the new cancer drugs added to the Essential Medicines List. 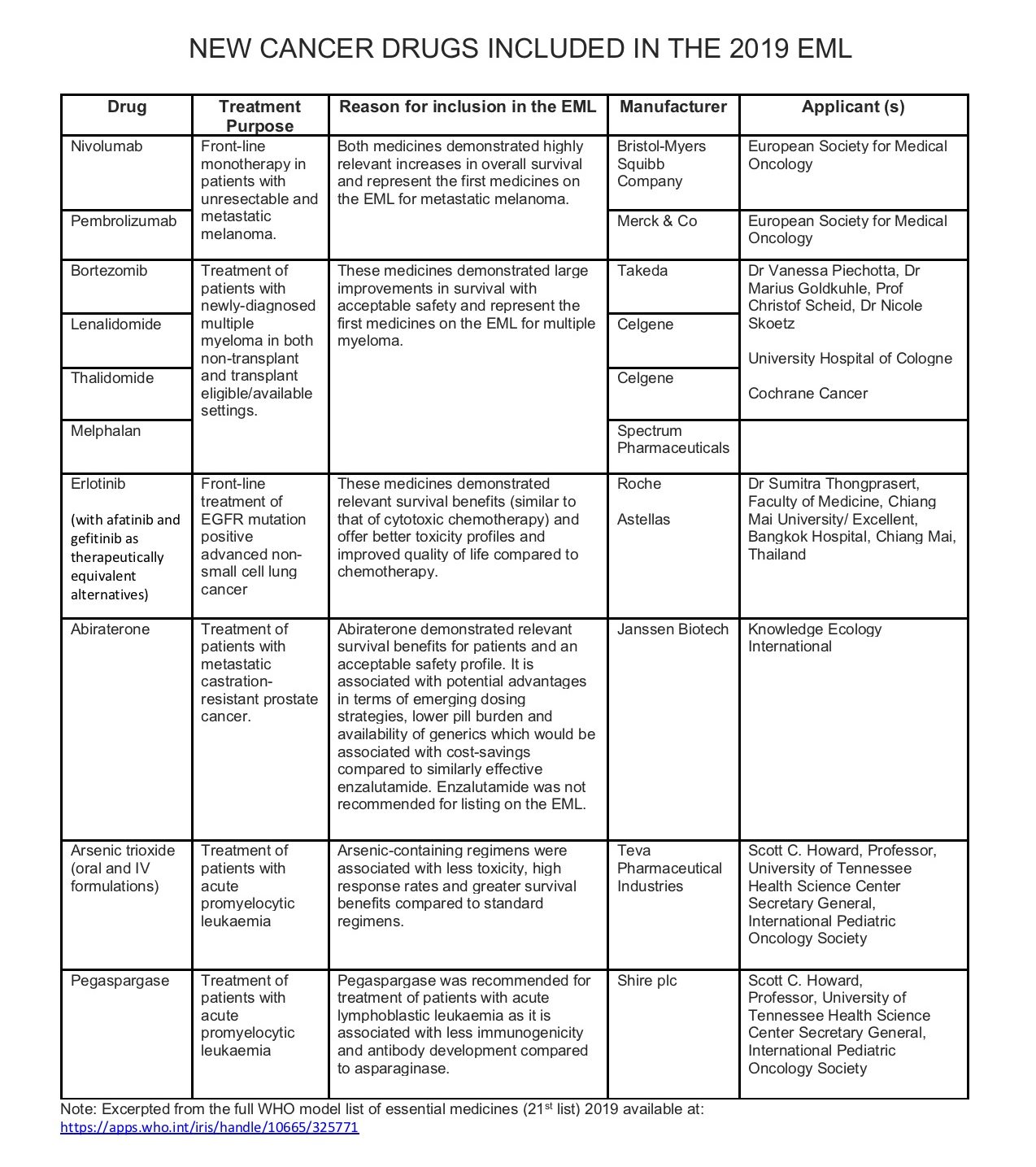 The latest Essential Medicines List also includes the first all-oral treatment for sleeping sickness, fexinidazole, an important milestone in the treatment of this neglected, and usually fatal, disease.

Registered by Sanofi and developed in clinical trials led by the Drug for Neglected Diseases initiative (DNDi), fexinidazole is used to treat the first and second stages of sleeping sickness, also known as Human African Trypanosomiasis, transmitted by the bite of a tsetse fly.

“65 million people, who live mainly in rural parts of East, West and Central Africa, are at risk of contracting sleeping sickness,” DNDi said in a statement.

Inclusion of the first all-oral drug in the Essential Medicines List “will spur governments in endemic countries to include fexinidazole in their treatment guidelines,” said Dr Nathalie Strub-Wourgaft, DNDi’s Director of Neglected Tropical Diseases, in the statement. “Inclusion of fexinidazole is also a further sign of WHO and Sanofi’s commitment to ensuring swift deployment of this paradigm-changing treatment.”

During the WHO Expert Committee on the Selection and Use of Essential Medicines meeting in April of this year, debates were heated over how to address the rising cost of insulin, a life-saving essential medicine that has been available for nearly 100 years.

The Committee ultimately decided not to include insulin analogues in the list, recognising “the need for a wider understanding of the complexities of access to insulin and the current insulin market,” and recommending that “WHO prioritize the coordination of a series of actions to address the issues of insulin access and affordability,” according to the Executive Summary.

“In the absence of other coordinated actions, the Committee considered that the inclusion of insulin analogues for adults on the EML [Essential Medicines List] would be inadequate to address the underlying issues of poor access and affordability of insulins,” it said.

The Committee’s decision was welcomed in a press release Wednesday by Health Action International (HAI), citing its recent study showing that analogue insulin can be as much as six times more expensive than human insulin, which is on the EML, and there is no independent evidence showing that the analogues are more cost-effective.

“A decision to include analogue insulins in the EML would increase pressure on national governments to purchase these far higher priced insulins. In low- and middle-income countries, where health systems budgets are already stretched; this would have disastrous consequences for people in need of insulin,” said Dr Margaret Ewen, co-lead of the HAI study in the statement, adding. “When the price of long-acting analogue insulin is lowered to an affordable level for governments and individuals, we would welcome a thorough evaluation on its value on the EML.”

The drug combination mifepristone–misoprostol, used to end pregnancies that are less than 10 weeks along, was recommended by the Expert Committee to be moved from the complementary to the more select core list of medicines, and for the two drugs to be co-packaged.

The Committee, however, noted that “its mandate did not extend to providing advice regarding the statement ‘Where permitted under national law and where culturally appropriate.’” So ultimately the decision to preserve the note was made by the WHO Director General.

Recommendations on Improving Access to and Affordability of Essential Medicines

In the Executive Summary, the Committee noted that throughout its April meeting to review and update the Essential Medicines List, issues of access to and affordability of the essential medicines was a core theme, particularly in the context of the rising cost of insulin and the high prices for the newly added cancer drugs. It further noted that this issue of affordability applies both to health systems and to patients.

While it acknowledged the “limited role of WHO in price setting at country level,” it “identified several different actions that could contribute to making some of the recently listed essential medicines more affordable at country level,” which include: