The milestone meeting set the tone for the next steps in the UHC process leading up to the UN High Level Meeting on Universal Health Coverage on 23 September, where heads of states are expected to approve a declaration on the issue. 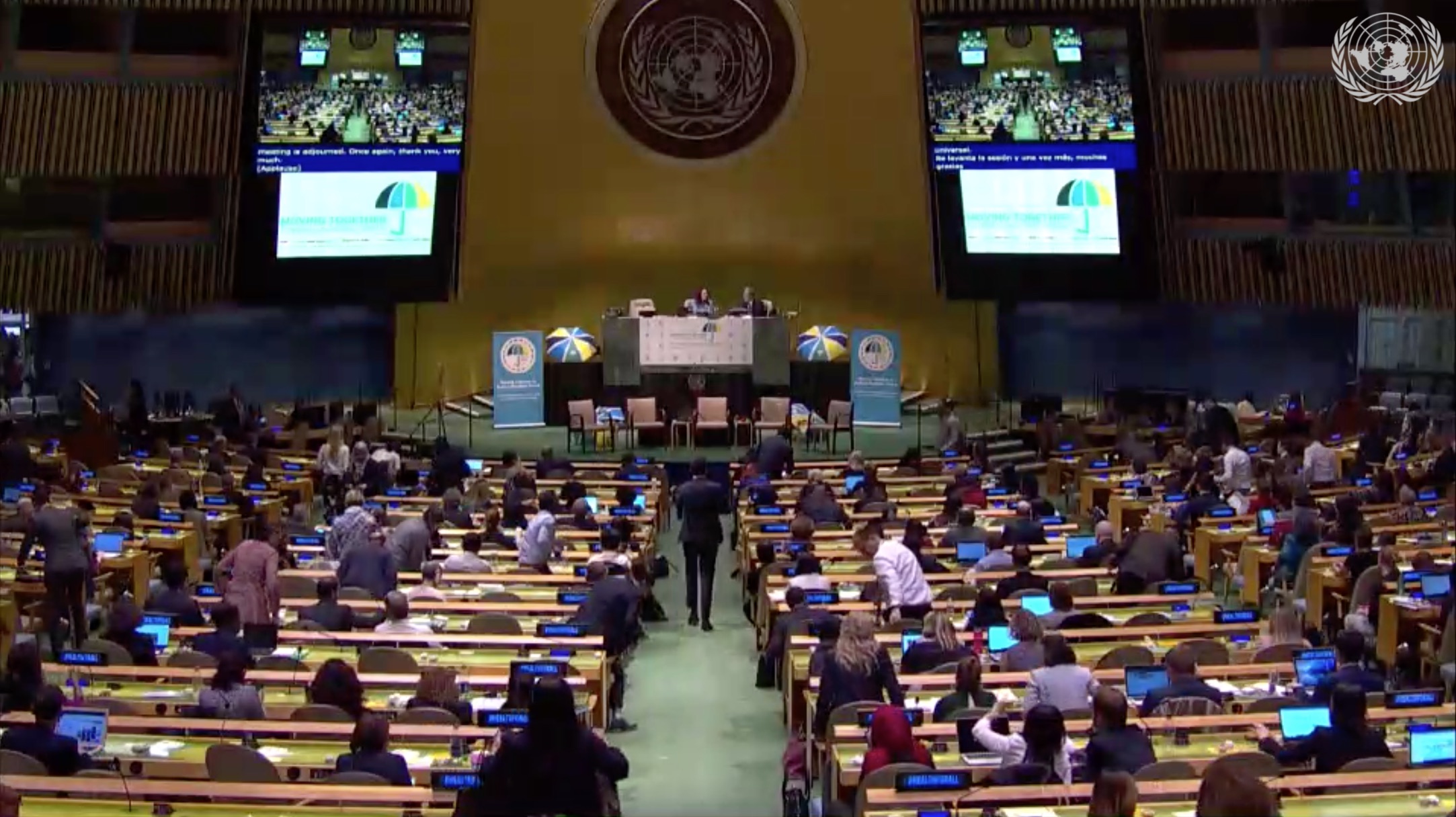 The UN Interactive Multi-Stakeholder Hearing on Universal Health Coverage, convened yesterday by María Fernanda Espinosa Garcés, President of the UN General Assembly, called on member states to ensure that UHC is inclusive of all people, that it recognises women and women’s rights as fundamental to bringing about UHC, and that it prioritises public interest in the multi-stakeholder partnerships that will structure the delivery of UHC.

“At least half of the world’s population lacks access to essential health services. Health expenses push over 100 million people into extreme poverty every year,” Garcés said in her opening remarks.

“And so often, women and girls suffer disproportionately when it comes to sexual and reproductive health, but also when it comes to accessing other basic services. Persons with disabilities, indigenous peoples, minorities and those living in rural areas are also more likely to have poor health outcomes. This is totally unacceptable and profoundly sad. It runs counter to our commitment to leave no one behind,” she said.

This multi-stakeholder meeting is one of the key milestones leading up to the UN High Level Meeting on Universal Health Coverage on 23 September at the UN in New York. It follows the 2012 UN resolution on Global Health and Foreign Policy, urging member states to accelerate progress toward UHC, and the 2015 inclusion of UHC as a 2030 target in the Sustainable Development Goals.

“Our aim in September when the General Assembly holds the high level meeting must be to accelerate progress on coverage, including financial risk protection, access to essential services, and access to safe, effective and affordable medicines and vaccines,” Garcés said. “Today’s discussion is an opportunity to prepare for that meeting.”

Speaking from the Democratic Republic of Congo (DRC), Dr Tedros Adhanom Ghebreyesus, Director-General of the World Health Organization, said that “more than 50 countries in the world lack the infrastructure needed to provide UHC. They lack skilled health workers; they lack quality medicines and medicine products; they don’t have basic services such as water and electricity. These are big challenges, and this meeting is happening today because UHC is the answer. UHC is the answer even for Ebola.”

Primary health care, he said, is the “engine for achieving universal health coverage,” recalling the 2018 Astana Declaration on Primary Health Care, which renewed political commitment to primary health care in preparation for the high level meeting on UHC.

“Looking ahead to September, it will be vital that the heads of state push the agenda forward in an unprecedented way during the high level meeting. Within our grasp is to turn the vision of UHC into a reality, for everyone including the most neglected individuals and communities,” he said.

The programme for the multi-stakeholder meeting is available here, and the webcast of the meeting can be viewed here on UN Web TV.

The co-facilitators, Kaha Imnadze, Permanent Representative of Georgia to the UN, and Vitavas Srivihok, Permanent Representative of Thailand to the UN, noted that over the next few months there will be “intense negotiations” between member state delegates to decide on a final draft of the political declaration on UHC, which will be endorsed by member states at the high level meeting in September.

Six “Key Asks” on UHC, Plus a Seventh: Gender Equality and Women’s Rights

UHC2030, the multi-stakeholder platform informing the UHC process, launched six “key asks” earlier this month for member states to consider when drafting the political declaration on UHC in the lead-up to the September meeting.

The organisation Women in Global Health, represented at the meeting, added a seventh ask, calling for “gender equality and women’s rights to be central in UHC.”

The representative at the meeting noted that women make up 70 percent of the health workforce, and said that because of this, “women will deliver UHC.” She said that many of these women engage in low-paid or unpaid work. She therefore called on member states “to invest in decent work for women in the health workforce,” so that women can fill the 80 million jobs needed for universal health coverage.

“Addressing gender equality and women’s rights in UHC, including in the health work force, will benefit everybody,” she said. “This is everybody’s business, and the 7th ask is therefore everybody’s ask.”

During the discussion, a representative from Austrian Parliament noted that “we must not forget that human rights and the right to health includes sexual and reproductive health and rights,” which she said is a “very crucial and core part of universal health coverage. It is a way to provide dignity and self-determination of women, and it’s the fulfilment of human rights.”

Dr Batool Al-Wahdani, President of the International Federation of Medical Students’ Association, said that “gender equity and women’s empowerment, or sexual and reproductive health and rights, still falls from every political declaration that has been adopted. It fell from the Astana Declaration. We don’t know if it’s going to fall in September.”

She called on civil society advocates to “continue the fight to make sure that by September, gender equity and gender transformative approaches should not fall from the political declaration.”

Throughout the meeting, civil society groups emphasised that the term “universal” includes all people, which means that UHC must meet the needs of everyone, including all marginalised groups.

“The starting point for universal health coverage is not a technical one, but a social and an ethical consensus that health is a human right,” Dr Githinji Gitahi, Co-chair UHC2030 and CEO of Amref Health Africa Foundation, said in his keynote address at the meeting. “Health is the most fundamental human right which allows us to enjoy all other rights.”

Al-Wahdani noted that “marginalised groups are being left behind in a lot of systems,” and that “we cannot recognise that universal health coverage is being achieved or reached unless we make sure that every single marginalised group within the population” has “access to essential health care services.”

“In Guatemala, in our rural areas, most of the people do not know that health is a right – they don’t know this. They don’t know that the state is obliged to guarantee that human right, and that there are many frameworks, national and international, which support that right,” she said.

A representative from the Arab Foundation for Freedoms and Equality said that for “universal health coverage to be effective, member states must respect, protect and promote all people’s human rights, including the right to health, and not merely focus on strengthening the health system.”

He said that this includes repealing laws that “criminalise HIV nondisclosure, exposure and transmission, consensual same-sex behavior, gender expression, drug use and possession, and sex work.”

He noted the success of this strategy among the people’s HIV movement in Australia, which he said “is well on track to ending HIV transmission.”

Including everyone in UHC also requires needs-driven biomedical innovation, according to a representative of Drugs for Neglected Diseases initiative (DNDi), who said that “lack of sufficient tools and technologies is a significant driver of poor quality services,” and that quality health care must be prioritised for the most vulnerable and neglected populations.

As a multi-stakeholder endeavour, from financing to delivery, UHC has created a forum for dialogue on finding the right balance between meeting the interests of the public and private sectors, while ensuring the right to health and the inclusion of all people in health coverage.

“Sadly, nowadays, in many countries, we are seeing the commercialisation of health,” Khuất Thị Hải Oanh, Executive Director of the Centre for Supporting Community Development Initiatives, noted in the discussion.

“When health care becomes a market,” she said, “it is a decision to make an investment on which one has the biggest profit margin, which services will bring more money. And the ultimate goal of the investment in that case is profit, not the people, not the health of the people.”

Amanda Glassman, Chief Operating Officer for the Center for Global Development, noted that we should be careful when using “charged words” such as privatisation. “In Canada, primary health care is provided by private providers. Is that privatisation?,” she asked. “No, because it happens with public monies.”

Srinath Reddy, President of the Public Health Foundation of India (PHFI), said that “the point is very clear: the governments have a major responsibility in acting as the guarantor of UHC, both in terms of ensuring access and quality, and controlling the costs, even if the public sector is not the sole provider.”

“Even where the private sector is brought in to partner,” he said, “the word PPP [public-private partnership] must be re-defined to mean partnership for the public purpose. Define the public purpose, the deliverables and the mechanisms – don’t leave it to the market forces.”

He emphasised the importance of strengthening the public sector, particularly for low- and middle-income countries, “in order to ensure that the government and the public sector retain the bargaining power, even as they bring in the private sector as a part of UHC.”

A representative from the International Federation of Pharmaceutical Manufacturers and Associations (IFPMA) expressed support for “responsive and inclusive regulation and legal systems that uphold quality of care,” while also noting that policies should “promote appropriate incentives for innovation, including intellectual property to enable the development of breakthrough medicines and vaccines that are essential to address unmet medical needs.”

The Business Council for the United Nations noted that it looks forward to “opportunities for dialogue with member states and others to ensure a declaration that is embraced by all stakeholder groups as a shared guide for our work together toward the vision and attainment of UHC.”

Regarding this dialogue between the public and private sectors, Carmen Villar, Vice President of Social Business Innovation at Merck & Co, said that there are “barriers on both sides that need to be better identified so that they can be addressed by both sides,” noting that “there is a lot of expertise on both sides that can be shared.”