NEW YORK — United Nations members and stakeholders are mobilising to bring about universal health coverage across the world with all eyes on the UN High Level Meeting on Universal Health Coverage planned for 23 September. 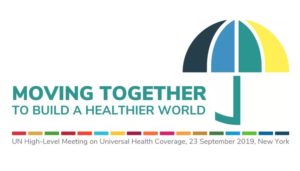 An informal meeting of representatives from countries and leading international health organizations at UN headquarters in New York yesterday provided an update on progress and highlighted emerging priorities for the planned High Level Meeting.

Among the needs highlighted at yesterday’s forum of “Friends of Universal Health Coverage and Global Health” were getting governments to take ownership domestically and finding sustainable financing.

The 23 September High Level Meeting at the United Nations is supposed to conclude with a political declaration to drive action on the issue. The meeting, under the theme, “Universal Health Coverage: Moving Together to Build a Healthier World,” will take place in the midst of the annual UN General Assembly week. It is considered the last chance to mobilise highest level political support for health issues before the world reaches the 2023 midpoint of the 2030 Sustainable Development Goals.

A document laying out the “Scope, modalities, format and organization of the high-level meeting on universal health coverage” was approved by the UN General Assembly on 13 December, and is available here (A/RES/73/131).

The next big date is a multi-stakeholder hearing on 29 April in New York. That meeting will try to capture stakeholder views and work them into the agenda for the High-Level Meeting (HLM), Ranieri Guerra of the World Health Organization said at the meeting yesterday. Guerra is the recently-named WHO special representative for the High Level Meeting. Also involved from WHO is Werner Obermeyer, the deputy executive director at the WHO Office at the UN in New York. 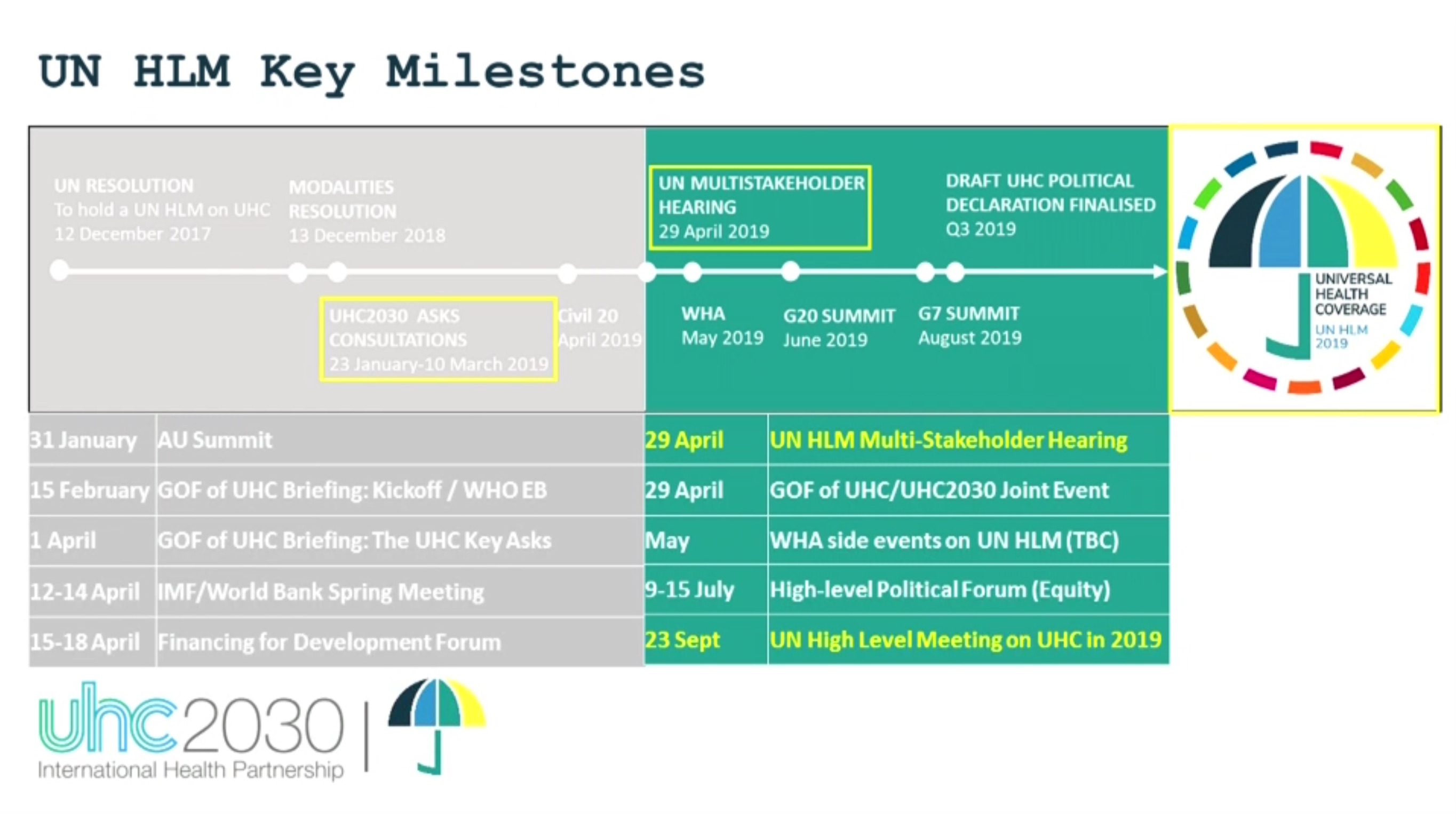 The co-facilitators of the HLM process are Kaha Imnadze, the ambassador of Georgia, and Vitavas Srivihok, ambassador of Thailand.

A main focus of yesterday’s meeting was a set of “Key Asks” developed by the International Health Partnership for UHC 2030 (UHC2030), a multi-stakeholder platform including countries, international organizations and civil society,

UHC2030, which was represented by its co-chair, Githinji Gitahi, said in a concept note for the 1 April meeting, “We have organized a series of multi-stakeholder consultations, including an online survey, to define a set of key ‘asks’ that partners can use to feed consolidated messages into the UN HLM including the multi-stakeholder hearing on 29 April 2019, inter-governmental negotiations and interventions during the UN HLM.”

“Universal Health Coverage (UHC) can only be achieved and sustained by collective multi-stakeholder efforts,” UHC2030 stated. “The Key Asks for the UN High-level Meeting on UHC (HLM UHC) in September have been developed by the International Health Partnership for UHC 2030 (UHC2030) to inform the HLM UHC Co-facilitators and the membership of the UN through a series of consultations by various stakeholders, including those within the UN system, parliamentarians, civil society, and public and private sectors.”

Six Key Asks as presented are reproduced below. A series of representatives of other agencies were asked to comment on the Key Asks, including from the World Bank, UN Development Programme (UNDP), UNICEF, UN Population Fund (UNFPA), UNAIDS, and GAVI, the Vaccine Alliance. Nongovernmental perspectives were given by representatives of the Primary Healthcare Initiative and the JSI Research and Training Institute, and the private sector view was given by the World Economic Forum.

Among the member states who spoke, Mexico’s ambassador highlighted what he called “probably the most important event” on public health in the Americas this year – a gathering on 9-10 April in Mexico City where a high-level report on UHC in 21st century from the Pan-American Health Organization will be released.

According to the release, “GAP is a commitment by leading global health and development agencies to advance collective  and coherent action to accelerate progress towards the achievement of SDG 3 and health-related targets of the 2030 Agenda (SDG3+), bringing together 12 agencies: Gavi, the Vaccine Alliance; the Global Financing Facility; The Global Fund; UNAIDS; UNDP; UNFPA; UNICEF; Unitaid; UN Women; the World Bank Group; the World Food Programme; and the World Health Organization. It was initiated by Germany,  Ghana, and  Norway,  and  is  being  developed  jointly  by  the  12  organizations,  with  World Health Organization playing a coordination role.”

For its part, the WHO sees itself as more supporter and “catalyser” than the “pen-holder”, said WHO’s Guerra. WHO has formed a steering committee with representation from the most senior level in the organisation, he said. 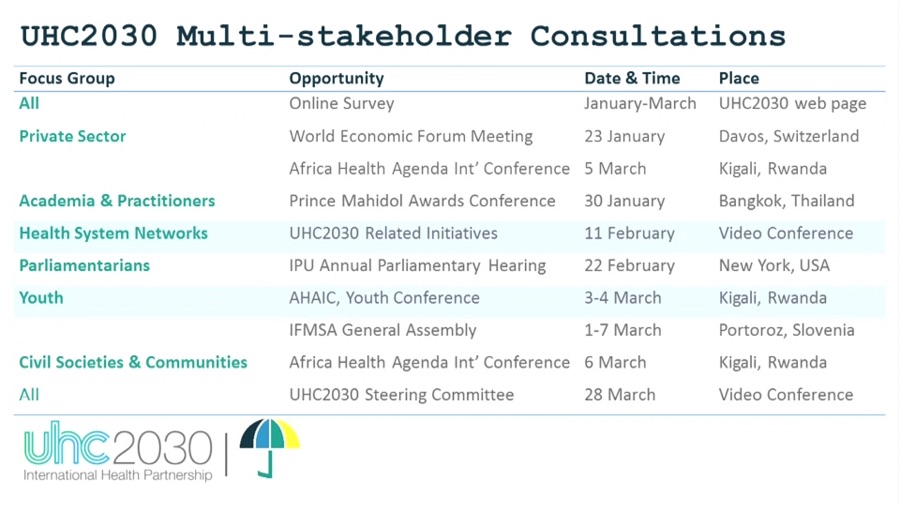 The key asks proposed by the UHC stakeholder group for the September High Level Meeting include the following:

Key Ask 2: Leave No One Behind

Milestone: By 2023, governments report disaggregated data to SDG official statistics to capture the full spectrum of the equity dimensions of UHC monitoring progress (SDG 3.8.1 and 3.8.2).

Milestone: By 2023, governments introduce legal and regulatory measures that accelerate progress toward UHC.

Milestone: By 2023, the coverage of quality essential health services has been delivered to one billion additional people (SDG 3.8.1).

Milestone: By 2023, all UN Member States endorse the UHC2030 Global Compact and establish multi-stakeholder platforms to ensure the involvement of civil society, communities and the private sector, in regular policy dialogue and review of progress with all government actors.