Berlin, Germany – From antimicrobial resistance to drug access, climate change and emerging trends such as growing obesity in Africa alongside under-nutrition, this year’s World Health Summit’s is packed with an imposing agenda, dwarfed only by the staggering dimensions of the real-world challenges.

“Polio has almost been eradicated, HIV/AIDS has been driven back and we have managed to cut overall infant mortality worldwide in half. These are positive developments, but one question remains – is this where we want to be? My answer is no,” said German Health Minister Jans Spahn in a stocktaking of global health issues at Sunday’s opening ceremony. 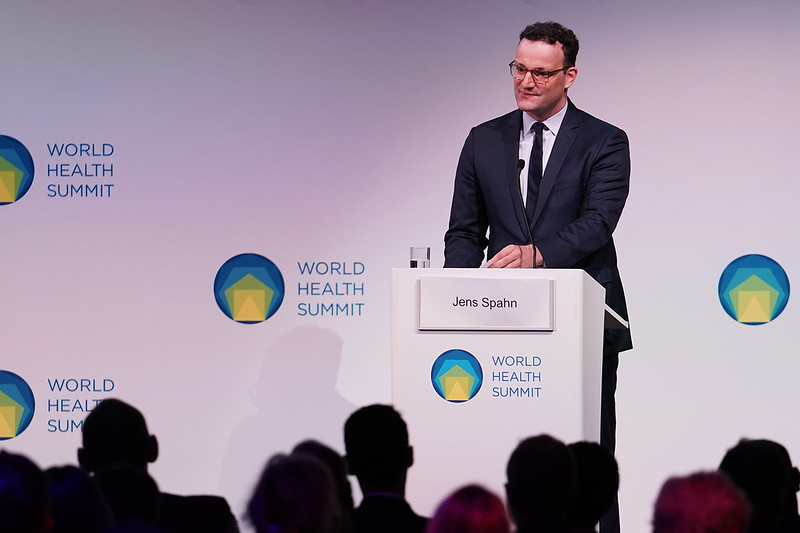 The world is far from reaching the health-related Sustainable Development Goals (SDGs), and will fall even further behind if it carries on with a business-as-usual scenario, he added.

“NCDs such as cancer, diabetes, and heart disease are on the rise. There are almost 50 million premature deaths every year, not only in low- and middle-income countries, but also in high-income countries. As for pandemic preparedness, we all know that we’ll face another pandemic. The only thing we don’t know is when it will happen and how severe it will be. Is the world prepared for this?

“If we look at the robustness of health systems worldwide….we have to confess “no.” the world is not adequately prepared yet. Today more than 1.6 billion people live in areas where protracted crises and weak health care systems leave them without access to basic health care.

“Ebola [in the Democratic Republic of Congo] is only the tip of the iceberg – most people are dying from easily treatable and avoidable diseases like measles or malaria. Even simple interventions such as immunizations still remain a huge challenge for weak and under financed health systems.

“We have 10 years in which to fulfill our ambitious [SDG] agenda, so we have to intensify our efforts, embrace true commitment for global health and work in partnership across all sectors and stakeholder groups,” he said.

At the same time, economic development which has led to better health, nutrition and increased life expectancy have in some cases been achieved on the back of wasteful use of resources that threatens future progress, noted Detlev Ganten, World Health Summit chair and president.

“People live longer and healthier in most parts of the world but this progress comes with a price – the exploitation of resources, destruction of nature, unhealthy urbanization and lifestyles, toxic footprints, and the heating of the earth,” he noted.

Against that landscape, the “One Health” concept needs to be expanded to include a healthy ecosystem that can nurture a healthy population, he said.

“Planetary health defines climate and environment as important determinants of human health. Both imply that we need a holistic view on health which includes our biology our environment and our lifestyle and behaviour.” A more holistic view of health can help overcome barriers of silos, politics, and ideologies he added, saying “it is time to act and take responsibility in good partnership.  The 17 Sustainable Development Goals provide this holistic framework. Healthy lifestyles can reduce toxic footprints and at the same time provide immediate co-benefits regarding climate, mobility, and nutrition.

The World Health Summit, co-sponsored by the leaders of Germany, France, the European Commission and the World Health Organization, is one of the premier global health events of the year, bringing together hundreds of participants worldwide – from ministers of health to WHO and other UN agencies, industry and civil society.

Unlike the World Health Assembly, which as WHO’s governing body meets annually and is focused around the deliberations and decisions of official member state representatives, the Summit is a more eclectic gathering which involves official, civil society and industry participants on an equal footing. Its thematic focus around key health topics creates a venue where information and practical solutions to pressing challenges can be freely shared and debated.

This year’s agenda is highlighting the theme of climate change and health. Other topics in the 2019 programme include: improving health systems in Africa and around the world; finding solutions to antibiotic resistance; digital health; and strategies for implementing Universal Coverage as well as other health aspects of the Sustainable Development Goals.

Against the high-minded ideals of partnership and progress, as expressed by the event’s patrons, the nitty-gritty nature of thorny issues like AMR was all the more apparent in the sessions that unfolded on Monday.

Wanton sales of unregulated antibiotics over the counter in some regions of the world such as South-East Asia; prescription of the wrong antibiotics; widespread dumping of pharma waste into watersheds; and the spotty global tracking of animal and human use of antibiotics worldwide –  are among the current practices stimulating antimicrobial resistance, noted participants in two panels that covered the issues Monday morning and afternoon.

“We need a lot of behaviour change,” said WHO Chief Scientist Soumya Swaminathan. “This can be focused on different levels of health care providers but also on community pharmacists [who often distribute antibiotics] and the community at large,” she said, referring to a “red-line” campaign that India had sponsored, in which pills that should be distributed only with a prescription had to be marked with a red line.

Poor hospital sanitation systems also give rise to AMR, she said, referring to a recent WHO/UNICEF report showing that one in four health facilities in low and middle income countries lacked basic water services, and even more lacked basic sanitation.

As for the dumping of pharmaceutical waste in watersheds, she noted that WHO was looking at amending its Good Manufacturing Practice standards, required by companies that want to be quality for donor-supported procurement programmes – to require adequate waste disposal for drugs produced. “It may mean a slight increase in the product but this is the price that has to be paid,” she said.

There is also a dearth of rapid, low-cost diagnostics that can properly identify bacterial infections requiring antibiotics, as compared to other parasitic or viral infections that need other treatments, noted Catherina Boehme of the Foundation for Innovative New Diagnostics (FIND). “Every patient’s road to healthcare begins with diagnosis.. yet wherever we look, we see that within low and income countries, 50-70% of the patients do not get diagnosed. If we fail to diagnose half of the patients, that is a failure when it comes to medicines. It has to be an end-to-end model.”

Along with that, market systems and procurement processes need to be revamped, agreed both industry and civil society representatives on one panel. In some countries, the prices of certain antibiotics are so low that it is no longer profitable to produce them at all.  As a result, hospitals in high-income countries often face gaps in the supply of critical antibiotics while in many low-income countries, the right antibiotics may still be too expensive or not available at all.

“There is a market failure of antibiotics, and shortages of antibiotics, so there is a spectrum where you see significant shifts in the pricing of antibiotics,” observed Manica Balasegaram, Executive Director, of the Global Antibiotic Research & Development Partnership (GARDP).

GARDP Strategy to Bring 5 New Antibiotics to Market by 2025

To combat the shortage of new antibiotics in the drug development pipeline, the new Alliance formally launched a new strategy, initially announced in July, to bring 5 new or improved antibiotic treatments to market by 2025.

The GARDP strategy will focus on creating formulations that are accessible to people in low and middle income countries, Balesegaram stressed, noting that sustainable access, in terms of antibiotics means “treatments of a required quality; manufacturing standards and environmental waste management; affordable for patients in health systems; supplied in a timely and appropriate manner; and used in an appropriate manner.”

Although there is no doubt that new antibiotics are desperately needed to combat AMR, which is estimated to kill as many as 700,000 people a year now and could kill up to 10 million annually by 2050, more could also be done with existing drugs.

“One of the greatest challenges in low and middle income countries is just the lack of access to existing antibiotics, and that is triggered by the high prices, low API (active ingredient) production, and the failure to use and understand the molecules that we have,” said Mirfin Mpundu, of the Ecumenical Pharmaceutical Network (EPN). “As we look at new innovations, we have to be very considerate and realize that lack of access remains an issue in low and middle countries.”

So far, so-called “5×25” GARDP strategy has so far only received commitments for about €70 million of the estimated €500 million required to develop the drugs, including planned new formulations for neonatal sepsis as well as for the sexually transmitted infection gonorrhea, which has shown increased resistance to existing drug treatments in many parts of the world.

However GARDP’s efforts received a further boost on Monday when several donor countries and agencies, including Japan, Germany and the United Kingdom, Japan, pledged more than €12.6 million more to the effort.

The program for the 2019 World Health Summit can be found here and the Summitb livestream can be accessed here.