Global progress against malaria continued to plateau in 2018 for the third year in a row, and the disease hit young children and pregnant women in Sub-Saharan Africa the hardest, according to the World Malaria Report 2019 released by the World Health Organization on Wednesday. Despite stalled progress at the global level, however, four new countries have successfully eliminated the disease in 2018 and 2019.

“We’re seeing encouraging signs, but the burden of suffering and death caused by malaria is unacceptable, because it is largely preventable. The lack of improvement in the number of cases and deaths from malaria is deeply troubling,” said WHO Director-General Dr Tedros Adhanom Ghebreyesus in a press release. “Pregnant women and children are the most vulnerable to malaria, and we cannot make progress without focusing on these two groups.”

In 2018, WHO estimates that there were 228 million cases of malaria globally, causing 405 000 deaths, as compared to 231 million cases and 435 000 deaths in 2017. A dramatic reduction in malaria incidence and mortality was seen through 2010 to 2015, but global progress against the disease has stalled since then.

The report underlines that malaria continues to strike particularly hard at pregnant women and children in Sub-Saharan Africa,, with an estimated 11 million pregnant women infected in 38 countries with moderate-to-high malaria transmission in that region alone in 2018. Malaria infection in pregnancy can cause a variety of complications, including malaria-related anemia, low birth weight, and even maternal death.

An estimated 24 million children in the region were infected last year with the deadliest strain of malaria – P. falciparum –  with at least half experiencing moderate anemia and 1.8 million experiencing severe anemia. Malaria-related severe anemia is still a major contributor to child mortality in Sub-Saharan Africa.

The plateau in progress may in part be caused by the shortfall in malaria funding – the report estimates that funding towards malaria control and prevention fell to US$2.7 billion last year with governments of malaria-endemic countries contributing an estimated 30% of the pool, falling far short of the US$5 billion needed to fully fund WHO’s Global technical strategy for malaria 2016 – 2030.

On the flip side, a handful of low-burden countries have seen progress. In 2018, WHO certified that endemic malaria was successfully eliminated Paraguay and Uzbekistan. Algeria and Argentina were recognized for eliminating endemic malaria in early 2019, and China, El Salvador, Iran, Malaysia, and Timor-Leste reported zero indigenous cases. Progress to achieve a global milestone to certify at least 10 countries for the elimination of malaria by 2020 is also on track.

Large reductions in malaria were also seen in WHO’s Southeast Asian region, said Dr Abdisalan Noor, lead author of the report and team leader of the Surveillance Unit in WHO’s Global Malaria Programme, in a press conference. Significant reductions in India, which had 2.6 million fewer malaria cases than the previous year, accounted for a large share of the success. Progress has also been made in the Greater Mekong sub-region – an important strategic area as resistance to antimalarial medications has historically been traced back to the region.

Coverage of pregnant women and children by malaria treatment and prevention interventions has increased in Africa, but these two groups continue to be the hardest hit by malaria.

“We have brought back the focus to the key populations at risk that suffer and carry the brunt of malaria; pregnant women and young children in Africa. And by highlighting this space, we also signal that they must become our number one priority in the fight against malaria,” said Dr Pedro Alonso, director of WHO’s Global Malaria Programme.

The WHO report estimates that in 2018, 67% of all malaria-related deaths occurred in children under 5, and malaria continues to be a leading cause of infection-related maternal mortality in Sub-Saharan Africa. 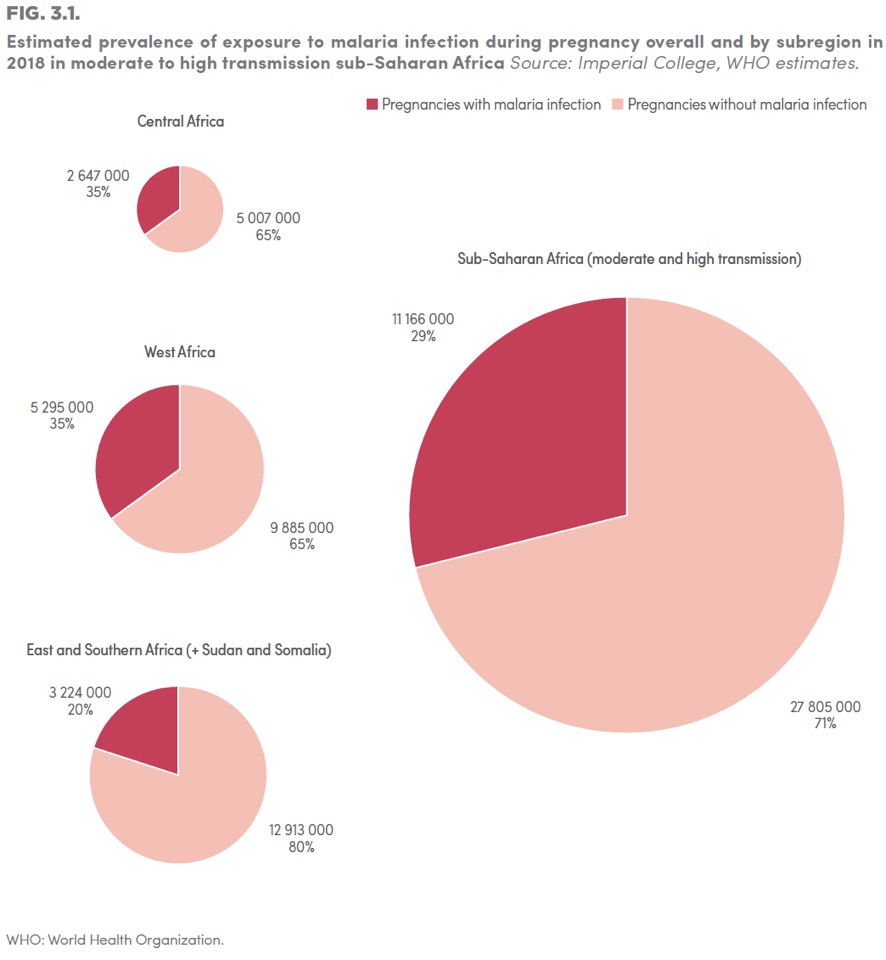 “Now, [another] one of the consequences of malaria in pregnancy is children that are born with low birth weight, less than 2500 grams at birth,” Dr Noor clarified. Low birth weight is not only an immediate problem for the growth of the child, but is also “a significant predictor of early infant death,” he added. The WHO report estimates that of the 11 million cases of malaria in pregnancy in Sub-Saharan Africa in 2018,  872,000 children were born with low birth weight.

This is despite the fact that the number of pregnant women and children sleeping under insecticide-treated bed nets and receiving preventative medicine for malaria has increased in recent years. An estimated 61% of pregnant women and children in sub-Saharan Africa slept under an insecticide-treated net in 2018 compared to 26% in 2010.  Among pregnant women in the region, coverage of the recommended 3 or more doses of intermittent preventative malaria treatment, delivered during antenatal care visits, increased from an estimated 22% in 2017 to 31% in 2018. Some 72% of eligible children received seasonal malaria prevention medication in 2018.

A new WHO-recommended strategy to prevent malaria in infants – intermittent preventative treatment for infants (IPTi) – recommends delivering anti-malarials to very young children through the immunization programme, and is being piloted in Sierra Leone.

Some “Elimination by 2020” Targets May Be in Sight

Despite little progress being made on the global scale, certain regions and countries are inching closer to eliminating malaria, defined as completely stopping endemic transmission within national or territorial borders. Globally, a total of 38 countries and territories have been certified malaria-free by WHO, with Paraguay, Uzbekistan, Algeria, and Argentina just added to that list between 2018 to 2019. WHO grants the malaria-free certification when a country proves, beyond a reasonable doubt, that the chain of indigenous transmission of malaria has been interrupted for at least 3 consecutive years. At least 10 countries that are part of WHO’s “E-2020 initiative” are on track to reach the 2020 elimination milestone of the global strategy.

The six countries of the Greater Mekong sub-region – Cambodia, China, Laos, Myanmar, Thailand, and Vietnam – have made significant progress. Across the subregion, there was an impressive 76% reduction in malaria cases and a 95% drop in deaths between 2010 and 2018. This includes a steep decline in cases of P. falciparum malaria, a primary target in view of the ongoing threat of antimalarial drug resistance.

Some 11 African countries and India account for approximately 70% of the world’s malaria burden – Burkina Faso, Cameroon, Democratic Republic of the Congo, Ghana, India, Mali, Mozambique, Niger, Nigeria, Uganda and the United Republic of Tanzania. The WHO and Roll Back Malaria Partnership launched a “high burden high impact” (HBHI) approach in these countries in 2018. By November 2019, the HBHI approach had been initiated in nine high burden countries in Africa.