Drummers, dancers, and speakers blasting Lady Gaga for a crowd of five hundred people linking hands and doing the wave is not the image typically conjured up when one hears of a World Health Organization event. A crowd gathered beneath a small stage decorated with slogans championing universal health coverage. Despite the morning’s chill lingering in the air, high spirits were contagious. This was the scene outside the United Nations headquarters in Geneva on Friday 5 April, where activists and health officials gathered to celebrate ahead of World Health Day 2019. 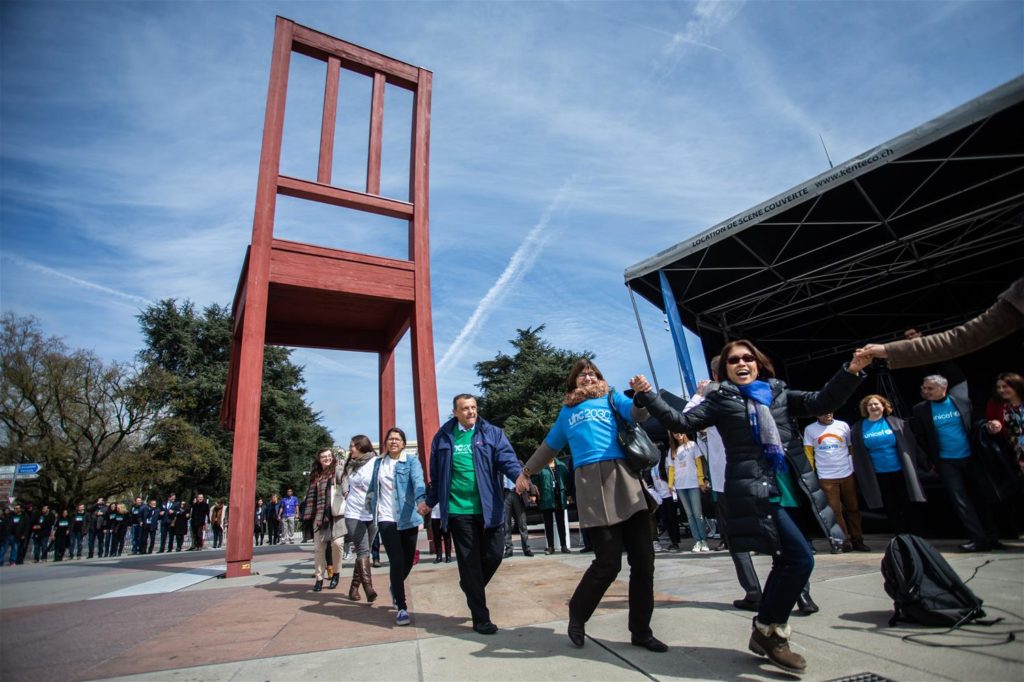 Celebrated annually on 7 April, World Health Day is a day of global health awareness sponsored by the WHO and other health organisations. The event is themed each year to draw attention to an issue of major importance to global health. Universal health coverage (UHC) has been the theme for the past two years.

This year, a crowd assembled outside the WHO building and then walked to the Palais des Nations. Underneath the famous Broken Chair, they formed a human solidarity chain, joining hands as a show of commitment to providing accessible health care for people all over the world. Activists and officials from health organisations could be pinpointed by their bright t-shirts, and civilians were given WHO stickers to display their solidarity.

“This is not what we expected from a WHO event, but it’s great to see community engagement like this,” Seth Faison, Head of Communications for the Global Fund to Fight AIDS, Tuberculosis and Malaria (Global Fund), told Health Policy Watch. Faison was quick to explain not only the Global Fund’s purpose in supporting the event, but his personal belief in health care for all.

“For the Global Fund, this event is about a commitment to Sustainable Development Goal 3, because for us all the SDGs are connected, and they can only succeed if we work on them together. Health is an area that requires international cooperation to make this work happen, not just between governments but between citizens and key affected populations, too.”

He then spoke about growing up in New York, watching a major health crisis erupt both globally and close to home. “I have for a long time been energized and determined to do what was possible to stop HIV, which was what drew me to health and health policy. I could never have imagined a day where death rates have come down by half. There are still far too many deaths, and we have to finish the job, which is why international cooperation and events like this are so important.”

Faison was not the only person drawn to the event, and to global health, out of a desire to make an impact on everyday lives. Sona Bari, a senior communications officer at the WHO, told Health Policy Watch she did not start her career on a path that logically led to health. “My background is in journalism. I came from covering humanitarian disasters, but after a while I always felt like I had to ask myself how I could contribute to helping the people I reported on.”

For her, the question of universal health coverage is vital to advancing society. “I work in external relations for global polio eradication, and I fell into the job by accident. Then I fell in love with public health. Events like these are why I do what I do. It’s something I really believe in.”

Several global health officials spoke at the event, reiterating the need for a global push toward accessible health care. Among them was WHO Director-General Dr Tedros Adhanom Ghebreyesus (Dr Tedros), who declared for the crowd that health is a right, not a privilege.

Dr Tedros said that this event symbolized a commitment to ensuring that health for all is possible and protected no matter where in the world one goes. “It’s a really important issue that we must keep advocating for. More than half the world’s population has no access to health services. This is tragic, and we shouldn’t accept this.”

Though the road to universal health coverage is long, Dr Tedros was jovial as he addressed the audience, and he spoke openly about his hope for the future: “We’re seeing many countries committing to health for all through events like this, which is good, and which must continue.”

For those present, joining hands in solidarity was not just a symbolic gesture. In order to achieve SDG 3 by 2030, “we need to see 1 billion people benefitting from UHC [universal health coverage] in the next 5 years,” Dr Tedros said in the WHO’s World Health Day statement. “This is not an unattainable dream, nor will it require billions of dollars to implement. UHC is achievable, right here, right now, for all of us.”