WHO has released a set of draft “guiding principles” on front-of-label food packaging that would provide stronger indications to consumers of the healthy or unhealthy components in packaged and processed foods. 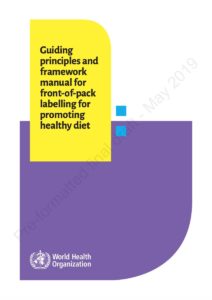 The draft WHO Guiding principles and framework manual for front-of-pack labelling for promoting healthy diet, will provide a key input to deliberations by the 45th session of the Codex Alimentarius Committee on Food Labeling, a joint Food and Agriculture Organization and WHO body, which yesterday opened a week-long meeting in Ottawa, Canada.

The Committee is looking at ways to include more health-minded labelling into the Codex Alimentarius Guidelines for Nutrition Labelling (CXG 2-1985), used by countries worldwide in national standard-setting.

The Codex Alimentarius, or “Food Code” standards, guidelines and codes of practice, are periodically reviewed and updated by the Codex Alimentarius Commission, which is part of the Joint FAO/WHO Food Standards Programme and was established by FAO and WHO to protect consumer health as well as guiding food-related trade practices.

Front of package labelling that can guide consumers to making healthier food choices has become a flagship policy of advocacy groups that want to put more teeth into measures for non-communicable disease prevention. At the same time, food industry leaders as well as some countries have argued that such labelling could impinge on, or even violate, global trade agreements.

The draft WHO guidance does not resolve the big issues outstanding, but provides a framework of principles for national governments to consider in standard-setting, as well as for the Codex Alimentarius Committee to consider in advancing adoption of new global standards.

According to the WHO draft guidance, Front-of-pack labelling (FOPL) can be defined as nutrition labelling systems that are:

The Codex Alimentarius Committee on Food Labelling is developing proposed guidelines, based on the WHO framework and a set of guiding principles that countries are negotiating. The draft principles, still under debate, include recommendations for a single system of uniform labelling by country, or when feasible, by region; presentation of information clearly visible on the front of the package; easy for consumers to understand, including those with a low level of literacy; supplementary to the baseline nutrition information that typically is found on the back of packaging; complemented by consumer education programmes; underpinned by objective measures of nutrients; and allowing for consumers to better understand the nutritional composition of the food that they eat.

Once the Committee’s guidelines are complete, they would go to the full Codex Alimentarius Commission for review and approval.