A substantive discussion took place at the World Health Organization Executive Board meeting yesterday in response to a recently released WHO report on cancer drug pricing. Among the variety of perspectives expressed, many formed consensus in calling for increased transparency of research and development (R&D) costs and equitable access to innovative cancer drugs. 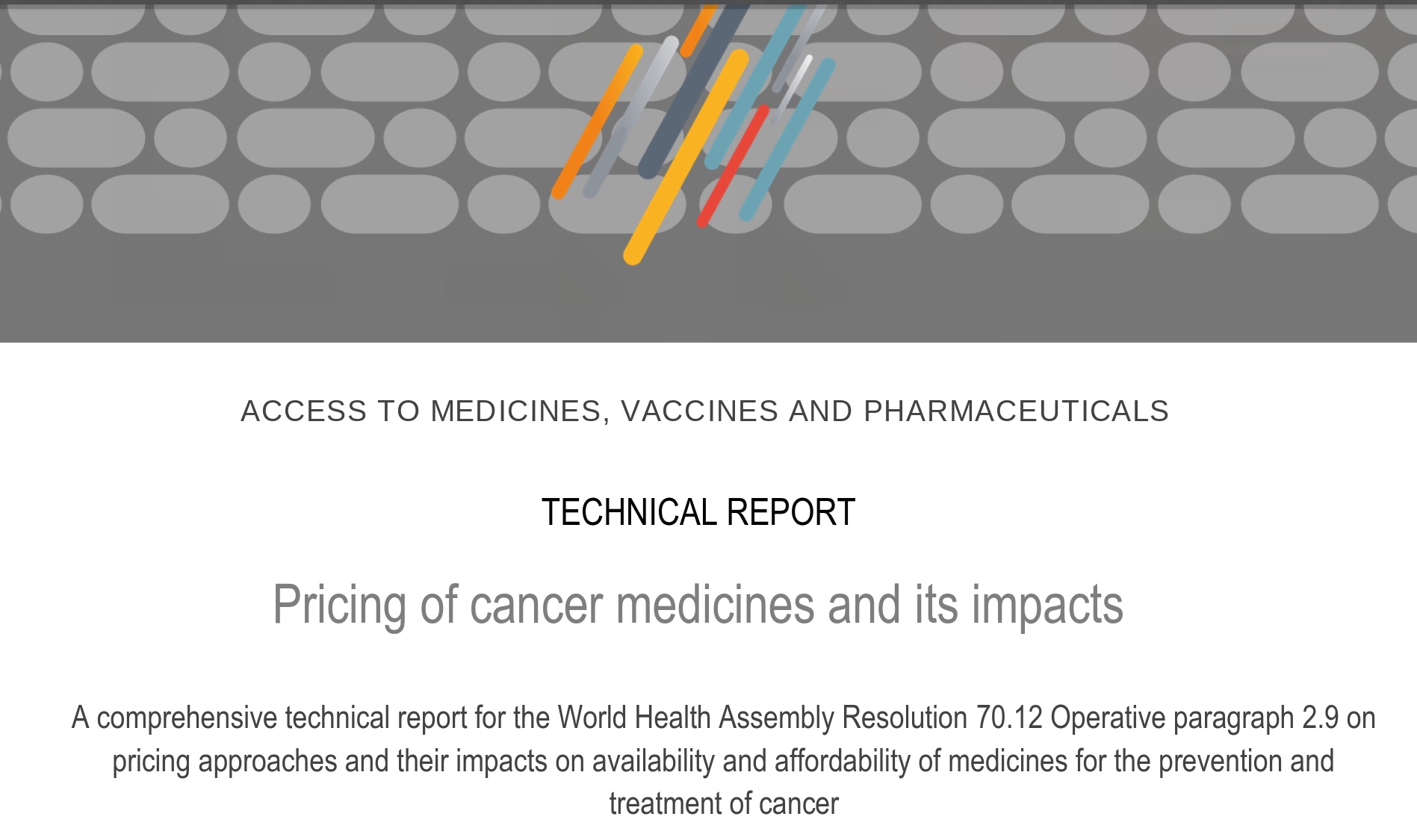 The meeting took place as part of the broader WHO Executive Board meeting in Geneva, and focused on the new WHO report on cancer drug pricing [pdf], recently released by the WHO Department on Access To Medicines, Vaccines and Pharmaceuticals. The Board took note of the report, which now will be taken forward for additional steps.

The secretariat highlighted that treatment guidelines for cervical cancer are due to come out soon; guidelines for integrating pain management are coming out this week; the world health report this year will be on cancer; and, in response to requests from some member states, WHO might organise an information session before the annual World Health Assembly in May.

It also identified that pharmaceutical companies set prices not based on the costs of R&D, but rather according to “commercial goals, with a focus on extracting the maximum amount that a buyer is willing to pay for a medicine,” which “makes cancer medicines unaffordable, preventing the full benefit of the medicines from being realized.”

The report found that “[e]xisting approaches to managing the prices of cancer medicines have not resulted in outcomes that meet policy and economic objectives,” and it recommends a set of policy options to enhance the affordability and accessibility of cancer medicines:

Member States Call on WHO to “Operationalise” Policy Options

At the meeting, member states largely applauded the policy options recommended in the report, and called on the WHO to work closely with member states to ensure that these policies are effectively developed and implemented at national and international levels.

Some states also identified the broader applicability of the findings of the report beyond cancer drugs, and the importance of contextualising the issue of drug pricing within broader health systems.

Brazil noted that the conclusions of the report can be applied to many other types of diseases. Meanwhile, Germany said that it is important for access issues to not be limited to drug pricing, but to rather be addressed as part of the wider health system, which includes access to diagnostics.

Australia then posed the question to the WHO of how these policy options will be “operationalised,” particularly in coordination between countries.

With regard to the findings of the report on how cancer drugs are priced, many member states railed against the current lack of transparency in the pharmaceutical sector, and called for R&D cost transparency on the basis of “good governance.”

Italy called for international action to increase the transparency of R&D costs, and for the WHO to play a stronger role in this regard. Meanwhile, Spain noted that this lack of transparency affects access to innovative medicines for low, middle and high-income countries alike.

Portugal declared transparency to be a “fundamental value of modern democratic societies,” and a matter of “good governance,” saying that lack of transparency can lead to corruption. Additionally, Portugal questioned if consumers are paying twice for drugs, due to extensive public sector investments in drug development.

On behalf of small island states, Fiji called for the development of improved regional procurement mechanisms to negotiate lower drug prices through economies of scale. This call for collective procurement was further reiterated by Peru.

Sudan described the unaffordability of drugs as a “global crisis” that prevents countries from strengthening health systems, and called on the WHO to scale up technical support to identify the most appropriate policy options in the region to address this.

US and Pharma Industry Critical of the Cancer Drug Pricing Report

The report had come under criticism from the research-based pharmaceutical industry, which said it was not consulted in the preparation of the report (IPW, Health & IP, 23 January 2019), a point raised in the meeting by the United States. Industry also raised concerns about the report findings.

Mariângela Batista Galvão Simão, assistant director general for Access to Medicines, Vaccines and Pharmaceuticals at the WHO, responded in the meeting that industry was not consulted in the preparation of the report in order to ensure there was no conflict of interest. Simão noted that the report was prepared by a range of experts and advisers and had gone through consultations.

The United States along with the International Federation of Pharmaceutical Manufacturers & Associations (IFPMA) were the most vocal critics of the WHO report on cancer drug pricing at the meeting.

The United States said that it “appreciates” the WHO analysis of cancer medicines issues and supports policy options including increasing competition, promoting generics and biosimilars, and strengthening regulatory systems. However, the US said it cannot support policies that include the use of flexibilities in the World Trade Organization Agreement on Trade-Related Aspects of Intellectual Property Rights (TRIPS) or increasing R&D cost transparency, because these “complex topics require more consideration of their economic, public health and innovation impacts.”

The US then called into question the integrity of the cancer drug pricing report, citing the lack of pharmaceutical industry involvement in the preparation of the report.

The IFPMA agreed, and also stated that the report’s assessment “did not reflect the full economic value to society from these innovations.”

In response to claims of flawed methodology, Simão explained that the WHO report was written by 26 experts, that it had been peer-reviewed and that it was based on direct observation. The Deloitte report, she said, was rather based on forecasted estimates of future revenues for a limited number of companies, and were not specific to the cancer drugs in the WHO report. “We cannot compare” two different studies, she said, and WHO reports are “more robust” than forecasting, and this WHO report was “meticulously done.”

“Direct observation,” she said, “is more accurate that forecasting.”

Civil Society Defends Use of TRIPS Flexibilities, Calls for Delinkage

Civil society groups reiterated members states’ calls for increased transparency of R&D costs and more equitable access to innovative cancer drugs. In addition, they also voiced strong support for addressing high drug prices by delinking the cost of R&D from the price of medicines, and by making full use of TRIPS flexibilities.

Oxfam noted that “cancer does not differentiate between rich or poor, but the price of medicines does,” and that the “world cannot wait any longer for people with cancer to be able to have the medicines that could save their lives.”

The Medicines Patent Pool (MPP) then invited pharmaceutical companies to partner with the MPP, and to voluntarily license priority cancer drugs to enable generic competition and to expand access.

Knowledge Ecology International (KEI) said the issue of high drug pricing is related to the fact that “incentives to invest in R&D are linked to prices,” and that “this creates a conflict, or a policy incoherence, between access and affordability on the one hand, and innovation on the other.”

KEI then called for “progressively delinking R&D incentives from prices so that efforts to make cancer treatments more affordable do not conflict with innovation objectives,” and invited the WHO to host a meeting to explore the feasibility of delinkage.

Meanwhile, the Union for International Cancer Control (UICC) highlighted that affordable drug pricing will be an important “pillar” towards achieving universal health coverage (UHC) and the Sustainable Development Goals (SDGs).

Médecins Sans Frontières‎ (MSF, Doctors Without Borders) concluded their statement by calling on member states and the WHO to prioritise this work, and to come to the World Health Assembly “to make a decision to address these roadblocks.”