WHO issued a call to the global community to come forward with US$ 675 million in funding to help some 60 low- and middle-income countries that are at significant risk of infection with the novel coronavirus that originated in Wuhan China prepare for possible outbreaks.

The call was issued by WHO Director General Dr. Tedros Adhanom Ghebreyesus at an afternoon press briefing on the virus, held on the margins of this week’s bi-annual WHO Executive Board meeting in Geneva.

The WHO Director General made the call as the case count in China continued to skyrocket to 24,554 cases confirmed globally, with 3925 cases of the pneumonia-like virus recorded overnight. As of 5 February, the virus had claimed 561 lives.

That was the largest single 24-hour increase since the outbreak began. That includes 24,363 cases in China, as well as 191 confirmed cases abroad, according to the latest WHO report.

“We are launching a strategic preparedness plan to support countries to detect and respond to cases,” said Dr Tedros.  “We are requesting US$ 675 million to fund the plan for the next three months, including US$ 60 million to fund WHO operations. The rest is for countries at risk.

“Our message to the international community is invest today or pay more later,” he said, noting that the Bill and Melinda Gates Foundation had already stepped up with a US$ 100 million contribution to the plan, for research and evaluation of new diagnostics, medicines and vaccines for the novel virus, dubbed 2019-nCoV. 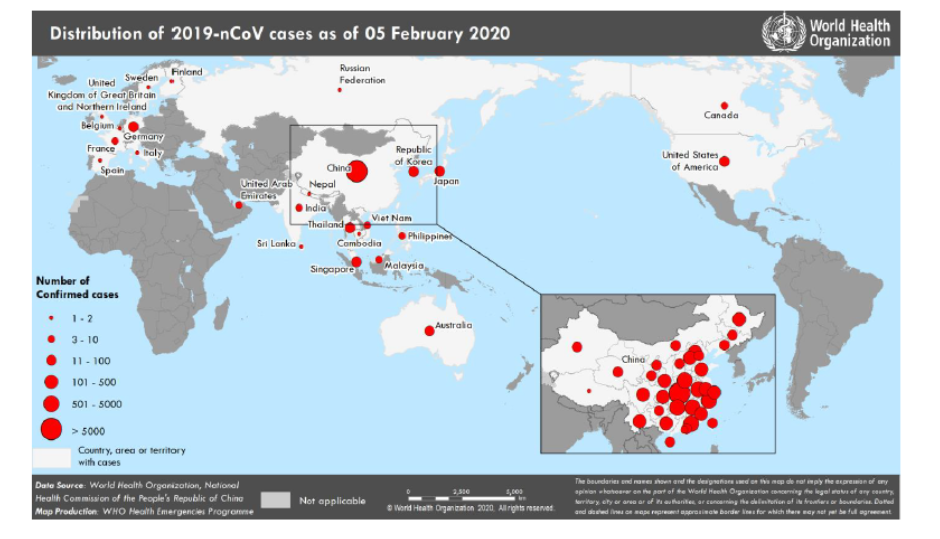 While weaker countries need to prepare for the possible arrival of the virus, Dr Tedros continued to protest what he described as the imposition of unecessary travel and trade measures against travelers arriving to other nations from China.  Some 22 countries have imposed restrictions or quarantine requirements, while multiple US and European airlines have cancelled flights.

“People are considering China as if the problem is the same in all provinces,” Dr Tedros said. “‘80% of the cases are in Hubei province, so that blanket approach may not help.”

But his message came against the backdrop of burgeoning limitations on travel – including an announcement by Hong Kong’s administration that it would begin to quarantine for 14 days anyone arriving from mainland China. Hong Kong is also holding a cruise ship offshore with 1,800 people aboard, due to suspicions that some passengers might have contracted the virus. Another cruise ship of 3,600 people is reportedly being held by Japan off the coast of Tokyo, where 10 cases of the coronavirus have reportedly been confirmed.

Sylvie Briand, WHO Director of Epidemic and Pandemic Diseases said that WHO was holding talks with the travel and tourism industry to discuss real and perceived threats from the virus, and measures that could be put in place to reassure worried customers and employees.

At the briefing, WHO’s Head of Emergencies Mike Ryan said that scale up of capacity for countries to detect the virus was happening rapidly.

Scott Pendergast said,  “there are around 60 countries globally with weaker health systems at high risk of imported cases; within Africa that includes 25 countries.”

In contrast, in Latin America, Ryan said that laboratory networks are stronger as are the public health systems, “so we hae more confidence, and there are fewer countries that directly need operational assistane.  Although there are some that have suffered recent shocks.”

In addition half a million surgical masks, 250,000 pairs of gloves, as well as thousands of respirators had been sent to countries around Africa, using WHO contingency supplies and funds, Dr. Tedros said.

Meanwhile, just opposite the sprawling WHO campus in Geneva, a panel of legal experts discussed whether the 2005 International Health Regulations (IHR), a binding legal convention that guides WHO and member state responses to health emergencies, needed a brush-up, in light of the unfolding coronavirus emergency.

In the face of criticism over the WHO delay in declaring an international health emergency, under the provisions of the IHR, Dr Tedros recently suggested that the system should not just include a “red and green light, but also a yellow one”  – to warn countries of budding crises, even if an outbreak had not yet exploded outright.

Speaking at the expert session, Burci said that there are gaps and weaknesses in the current IHR system. “We are testing IHR again. Even as we are [not completely finished] addressing Ebola, the IHR system is again being put to test with the outbreak of the novel coronavirus.”

There is a need to look at the design and politics behind the law, not only how the existing law is being implemented,” added Burci at the session, held as part of a Geneva event focusing on issues raised in a Lancet Commission report on Harnessing the Power of Law for Global Health, published in 2019.

Burci noted that in the most recent iteration of the International Health Regulations occurred under pressure, in response to the 2002-03 epidemic of Severe Acute Respiratory Syndrome (SARS).

“The IHR themselves were thoroughly revised within a very short period of time between January 2004 to May 2005. So there was a rush then, in the aftermath of the outbreak of Severe Acute Respiratory Syndrome (SARS). This may explain some of the flaws we are witnessing, and perhaps there is a need to take a step back and rethink the design of the IHR with an open mind,” he said.

“What we have now is a very rigid binary framework around declaring a Public Health Emergency of International Concern (PHEIC); either there is an emergency or there is nothing.

“Reality is more complex than that, and it may be time to consider introducing a more nuanced system of alert. The declaration of a PHEIC is a highly symbolic act but its legal consequences, as well as those of the temporary recommendations that the WHO DG can issue after declaring an emergency, are unclear. People are asking questions on what is the legal effectiveness of the current framework, and related questions on accountability given that the compliance with this framework is inconsistent.”

Priti Patnaik contributed to this story.