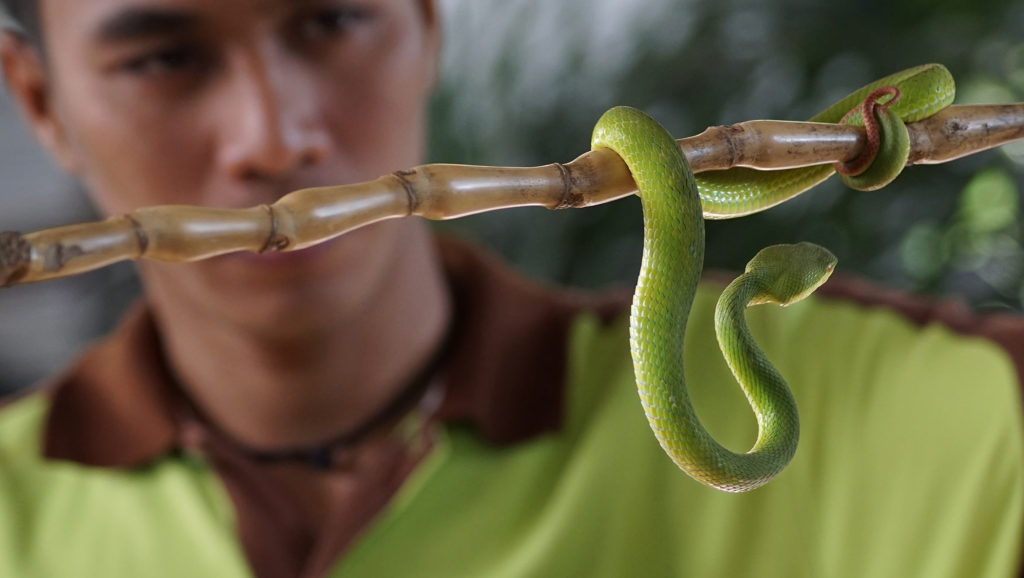 According to a report [pdf] by the WHO, about 50 to 55 percent of all snakebites result in envenoming, and a recent publication estimated a total of 79,000 deaths caused by venomous animals in 2016, with an uncertainty range of 56,800 to 89,400 casualties.

The decision [pdf] adopted by the 71st World Health Assembly taking place from 21-26 May lists of number of actions to be taken by member states and the WHO secretariat. It had already been adopted by the Executive Board in January (IPW, WHO, 30 January 2018).

Snake venoms, the WHO report says, are complex mixtures of protein and peptide toxins, varying from one species to another, and even within species.

The decision asks member states to assess the burden of snakebite and, and strengthen surveillance, prevention and treatment. It also asks that the availability, accessibility and affordability of antivenoms be improved.

Member states are also requested to promote the transfer of knowledge and technology between themselves so to improve the global availability of antivenoms.

The WHO for its part is requested to “foster international efforts aimed at improving the availability, accessibility, and affordability of safe and effective antivenoms for all.” The secretariat is also requested to provide support to member states for strengthening their capacities and to foster technical cooperation among member states.

During the discussion prior to the agreement on the resolution yesterday, a number of countries underlined the need to collect relevant data to map the issue appropriately, and the importance for quality antivenoms to be available and affordable. These countries included Benin for the African region, Colombia, and Indonesia.

Benin also underlined the need for further research on serum and antivenoms for different species of snakes, for training specialised health personnel, and increased access to all.

Honduras suggested having an inventory of different types of snakes, improving statistics, and ensuring technological transfer and financial support. Paraguay called for WHO to help countries establish stocks of antivenoms, and Australia indicated the need for a holistic approach with immediate and long-term actions.

Antivenom production is not commercially viable using current production techniques which are complex and rely on species-specific anti venom, the Australian delegate said, adding the country welcomes consideration of emerging technologies and research and development to improve global supplies. Indonesia called for the WHO to help build local production capacity, as most antivenoms are imported in the country, the delegate said. The Philippines also called for capacity building for antivenom production and through training with regional or international antivenom manufacturers.

Some countries, such as Argentina and Algeria suggested that the WHO also looks at envenoming such as spider or scorpions envenoming.

Dr Ren Minghui, WHO assistant director-general for Communicable Diseases said the WHO is planning to convene a stakeholders meeting at the end of 2018 to launch a roadmap on snakebite envenoming, after a “broad consultation.” The WHO has already started work on the subject, he said, with a special taskforce involving two clusters: the Cluster for Communicable Diseases and the Cluster on access to medicines.

“This Resolution is a momentous achievement in the fight against snakebite envenoming,” Ben Waldman, HAI snakebite programme manager, said in a press release. “We are extremely proud to have led the charge to earn snakebite its rightful place on the global health agenda with the Global Snakebite Initiative and other partners.”

He however warned that “the Resolution will fall flat unless donors step up to adequately fund the WHO’s programme of work on snakebite – and governments in snakebite-affected countries heighten coordinated action to improve snakebite prevention, treatment and rehabilitation.”

The release also underlines the need for greater use of publicly-funded biomedical innovation models to address high prices of antivenoms.

Médecins Sans Frontières (MSF, Doctors Without Borders) also welcomed the decision. “We are encouraged to see that governments are finally getting serious about tackling snakebite, because it’s a major killer that has remained one of the world’s most neglected public health emergencies for far too long,” Julien Potet, policy advisor in the MSF Access Campaign, said in a release.

“Passing a resolution means that snakebite will now be on both national and international health agendas, and governments now need to make concrete commitments,” he said, calling for an ambitious snakebite WHO roadmap, and affordable, quality-assured anti-venom products.

In June 2017, the WHO categorised snakebite envenomation into the Category A of the Neglected Tropical Disease.