In August, the Democratic Republic of the Congo (DRC) passed a milestone—surpassing 3,000 cases of Ebola since the outbreak began over a year ago. While the number of new infections has since slowed, there continue to be cases in hard to reach areas, posing challenges to response teams. The outbreak response has been complex, with security concerns hampering proven interventions.

Even with the availability of a vaccine and new treatments, the complicated political and social dynamics have hindered efforts. It’s a sobering reminder that the development of robust systems to prevent, detect, and respond to health threats is critical to saving lives.

Dr. Tedros Adhanom Ghebreyesus, the Director General of the World Health Organization (WHO), has stressed throughout the DRC Ebola crises of the need to build stronger health systems that can prevent epidemics before they occur. And specifically, support dedicated epidemic preparedness efforts.

A critical tool to gauge a country’s preparedness ahead of a crisis is the Joint External Evaluation (JEE), a tool developed by WHO to assess how ready countries are to find, stop, and prevent epidemics. The recent completion of the 100th JEE is evidence that the tool has received widespread uptake since it was launched in Tanzania in 2016 – although many gaps identified in the JEE have yet to be addressed.

The JEE is a transparent, external assessment of health emergency preparedness designed to identify how ready a country is to prevent, detect, and respond to public health threats such as Ebola, yellow fever, and pandemic influenza. A peer-to-peer measurement, it acts as a kind of report card, where countries first evaluate themselves and are then joined by an external group of international experts. The evaluation covers 19 specific preparedness areas ranging from real-time surveillance to risk communications and national legislation, policy, and financing. 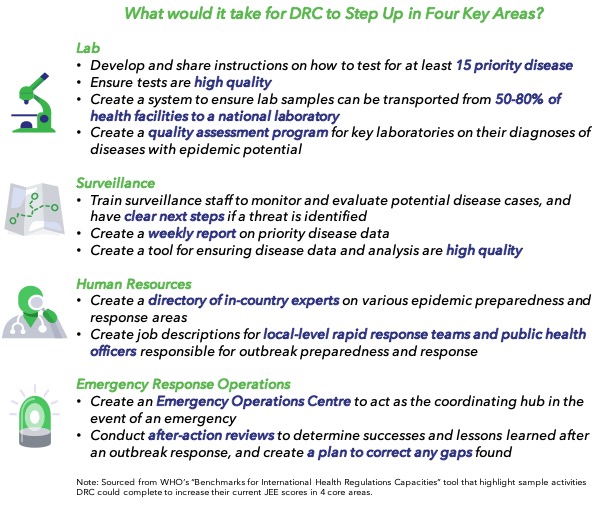 Each of the 19 areas is comprised of a series of indicators which are assigned scores during the peer-to-peer evaluation. Collectively, the information gathered through the JEE, including average national scores, provides important insight into the overall strength of a country’s system to deal with disease threats and other health emergencies. Countries lead the process with operational and technical support from WHO and other partners.

In the DRC, this has translated into a series of practical and critical initiatives to build stronger risk communication and community engagement teams; spread messages about the importance of seeking Ebola care early at health facilities; facilitate activities around vaccination, infection prevention and control; and ensure safe and dignified burials. Uganda and Rwanda have both stepped up their preparedness to prevent spread in their countries by operating vaccine drives, conducting border screenings for people with possible Ebola symptoms, improving cross-border collaboration and communication to reduce fear and keep borders open, and establishing isolation units and Ebola treatment centers.

Africa leads the world in evaluating preparedness – but many gaps identified

Of the nine countries sharing a border with DRC, none of the WHO priority 1 countries have achieved an average JEE score above 60% (Uganda, Rwanda, South Sudan, and Burundi). And of the WHO priority 2 countries, none have scored above 50% (Zambia, Tanzania, Central African Republic and Republic of Congo; Angola has not yet carried out a JEE). These scores indicate that these countries are underprepared and remain vulnerable to real risks that are playing out within the region.

Emergency preparedness is directly related to the quality of the health systems in a country, and the amount of resources used to strengthen it. However, as shown by the uptake of JEEs in regions like Africa, low and lower-income countries have taken greater initiative to assess gaps as the first step to improving their preparedness.

Since 2016 the JEE has identified more than 7,000 action items that must be addressed, giving us a playbook to make the world safer from epidemics. Although some countries are reasonably well prepared, many lack basic systems to find, stop, and prevent infectious disease threats. Many are developing national action plans but have yet to implement them. The gaps in preparedness, if not urgently addressed, make it not a question of if, but when the next devastating epidemic will strike.

The results of these assessments show many countries have strong immunization programs, disease surveillance, and laboratory networks. This likely reflects the financial resources provided by global donors and the technical assistance devoted to these areas. In contrast, critical areas such as legal frameworks, financing, disease-specific assessment and planning, and emergency response operations are among the weakest. This includes laws that set a legal precedent for disease control and preparedness, as well as activation and mandate of Emergency Operations Centers. Without these critical pieces, countries remain unprepared and unable to adequately protect their people, neighboring countries, and the world. 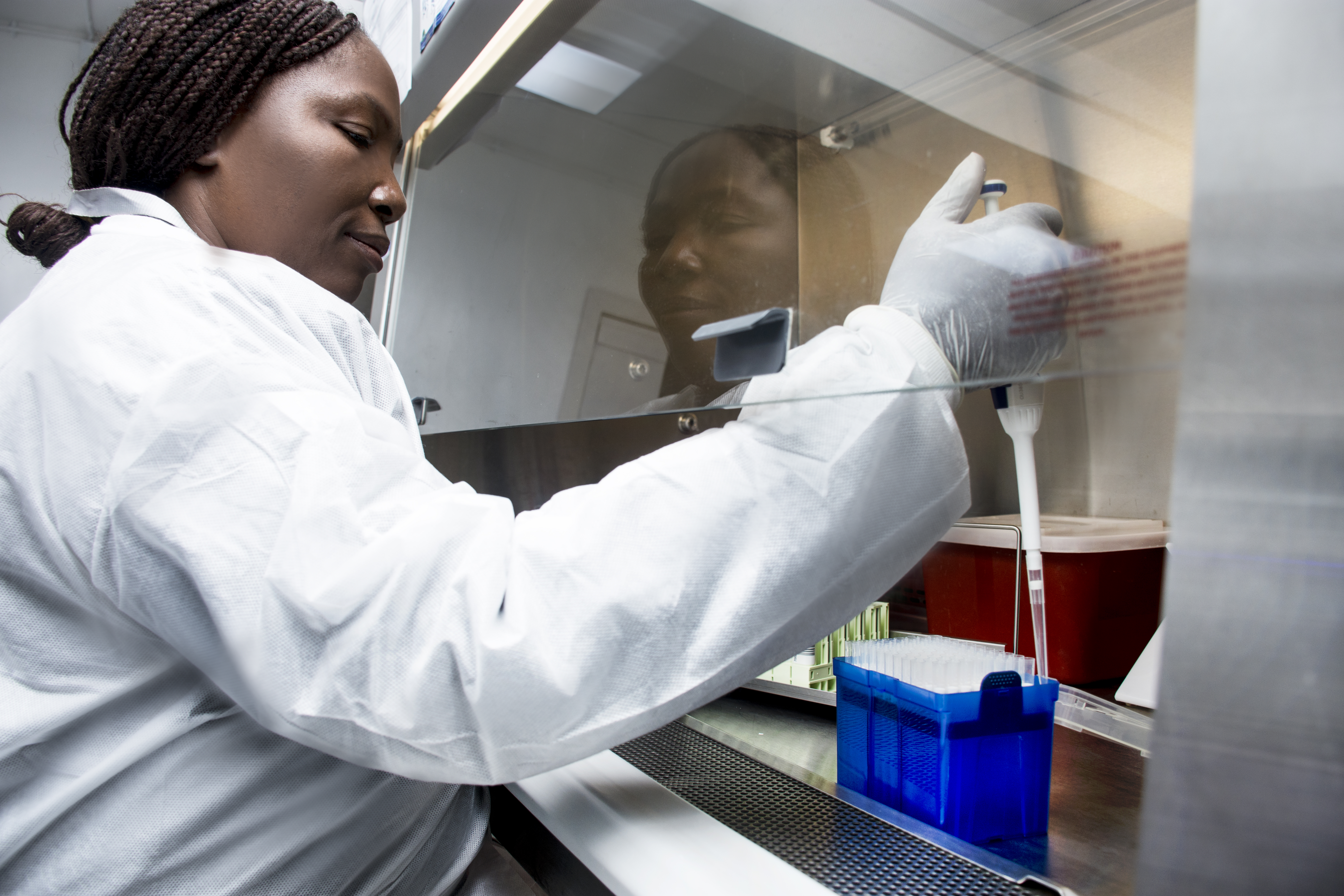 But progress is happening. Countries are starting to take action to fill their preparedness gaps. Nigeria developed a National Action Plan for Health Security and obtained funding from the World Bank and others to close gaps and improve preparedness. Uganda and many other countries are also using the JEE results to allow donors and partners to know which areas need the most support.

The second round of JEEs, to begin soon, will show us how these countries have progressed in just a few short years. Stepping up preparedness is difficult and will require sustained commitment from countries and from the global community. We must continue to conduct rigorous assessments while increasing support for countries.

And this support must include financing – from within and outside each country – as well as technical support. The World Bank estimates that annual global funding for effective preparedness is currently about $4.5 billion short. This may sound like a lot, but it’s less than a dollar per person per year, and far less than the cost of responding to disease outbreaks after they occur.

Recent studies show that every $1 spent on preparedness is worth more than $2 in the event of a public health emergency. In the absence of preparedness, costs will be high. SARS cost between $30-50 billion worldwide, and the 2014-2016 Ebola outbreak cost $53 billion in the three affected West African countries. A severe global pandemic could cost trillions, up to 5 percent of global GDP.

Completing over 100 JEEs illustrates the commitment of the global community to assess gaps in our ability to fight health threats. Now we must work with countries to translate JEE recommendations into urgent action that will close the gaps and prevent, detect, and respond to threats to public health.

Amanda McClelland is Senior Vice President, Prevent Epidemics of Resolve to Save Lives, an initiative of Vital Strategies. Dr. Stella Chungong is Chief Country Capacity Assessment, Monitoring and Evaluation, WHO.

Related
Who Gets To Sit At The Table in Pandemic Treaty Negotiations? Debate Opens Pandora’s Box of Vested Interests
Inside View
Buyers United: How Low- and Middle-Income Countries Can Get a Better Deal on Pharmaceuticals
Inside View
HIV and NCDs: Integrated Care for Better Health and Stronger Systems
Inside View

Related
Who Gets To Sit At The Table in Pandemic Treaty Negotiations? Debate Opens Pandora’s Box of Vested Interests
Inside View
Buyers United: How Low- and Middle-Income Countries Can Get a Better Deal on Pharmaceuticals
Inside View
HIV and NCDs: Integrated Care for Better Health and Stronger Systems
Inside View