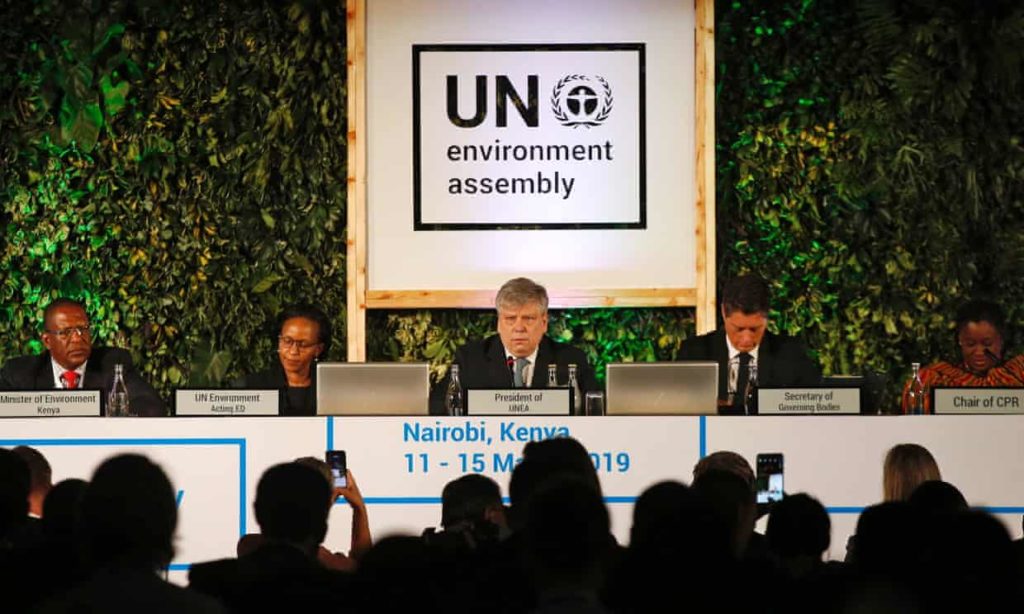 The Assembly, which brings together environment ministers and policymakers worldwide, will reflect on some critical global health themes over the course of its week-long meeting, culminating in Wednesday’s launch of a new Global Environment Outlook (GEO-6) “Healthy Planet, Healthy People.”

Side events also are touching upon targeted health issues, such as impacts of uncontrolled waste burning and dumping; discussing plans by Africa to simultaneously clean up air pollution and climate pollutants; and reporting on how Beijing has sharply reduced exceedingly high levels of health-harmful air pollution in the past five years.

The GEO-6 report, the first to be released by UN Environment in almost seven years, describes how current production and consumption trends are depleting critical resources of clean air, fresh water, oceans, land resources and biodiversity, which sustain health and wellbeing. Highlights were posted online just ahead of the UNEA meeting, which was dubbed as one about finding solutions.

“We are here today because we share a common sense of purpose. We can no longer delay taking action to protect people and planet,” Joyce Msuya, acting executive director of UN Environment, said in her opening remarks to the Assembly. “And the good news is that around the world there are many examples of people, governments, enterprises and civil society that are not willing to wait to change our collective future.”

Assembly participants stood for a moment of silence before proceedings started in memory of the Ethiopian Airlines victims. “We are expressing our deepest condolences to the victims and everyone affected by the terrible tragedy of the Ethiopian Airlines crash,” Msuya said. The flight 302 route had been informally known as a “UN shuttle” because it carried so many passengers working in and around Nairobi’s UN hub.

The GEO-6 report, to be released on Wednesday, 13 March, will describe how environment and health impacts are a two-way street. “Human behaviour has had various impacts, ranging from serious to irreversible, on biodiversity, atmosphere, oceans, water, and land,” a draft posted on the International Institute for Sustainable Development’s knowledge hub states. The consequent environmental degradation, in turn, negatively affects health. The draft summary describes atmospheric pollution as having the most severe negative impacts followed by degradation of water, biodiversity, ocean and land environments.

On a brighter note, a UN environment, Review of 20 Years’ Air Pollution Control in Beijing, which was released just ahead of today’s UNEA opening, found that stiff measures taken by the Chinese government had reduced air pollution concentrations by 25-83 percent (depending on pollutant) since 2013. Concentrations of the most health-harmful pollutants, fine particulates (PM2.5), still exceed levels recommended by the World Health Organization, but this still represents rapid progress in recent years, according to the report by UN Environment and Chinese experts. Effective measures have included controls on coal-fired boilers, cleaner domestic fuels, industrial restructuring and new limits on motor vehicle fleets and emissions, the report noted.

Two other side events co-sponsored by the Climate and Clean Air Coalition are taking a look at improved waste management and African actions as key to expanding the circle of change.

“The health of the environment and the health of people are closely linked. We can’t continue to pollute our environment without serious consequences,” Helena Molin Valdes, head of the UN Environment-hosted Climate and Clean Air Coalition (CCAC), said. “Air pollution is now the biggest environmental threat to health and the Climate and Clean Air Coalition is dedicated to improving air quality in order to prevent millions of premature deaths a year, protect our climate and environment, and improve the quality of life.”

Innovative waste management solutions can both reduce air pollution and improve health, according to a CCAC side event that was held at UNEA today. Some 3 billion people, or 40 percent of the world’s population lack access to basic waste management infrastructure, according to a joint briefing note by the CCAC and the International Solid Waste Association, which co-hosted the event. Uncontrolled waste burning and waste dumping generate enormous impact on human health – through toxic air pollution emissions, leaching of toxics into water sources and also methane emissions that contribute to ozone and stimulate climate change.

The importance of financing and developing locally appropriate, safe and sustainable waste management solutions for low income and lower-middle income economies is critical to making a dent in the status quo. The UNEA side event explored how developing countries are adopting “lifecycle” approaches to waste management, and how awareness-raising can help tackle the problem at its source by influencing consumption and production habits.

At the side event, Gary Crawford, vice president of Veolia, a global waste management firm, said that waste management is key to achieving a pollution-free planet as well as the Paris Agreement on Climate. Diverting organic waste from landfills to biogas energy generation, can reduce methane and other greenhouse gas emissions, which also contribute to ozone air pollution by 10-15 percent.

Another CCAC co-sponsored event tomorrow on African Action plans to reduce short-lived climate pollutants will explore experiences in Nigeria and other leading African countries with action plans that target climate pollutants that also result in dangerous air pollution exposures to humans, as well as stunting crop production, a result of ground-level ozone levels drift from urban to rural areas.