UNAIDS urged UN member states convening today in Vienna for the UN Commission on Narcotic Drugs to enact sweeping reforms of policies towards injecting drug users, most of whom lack critical access to basic “harm reduction” services that could prevent them from becoming infected with HIV. 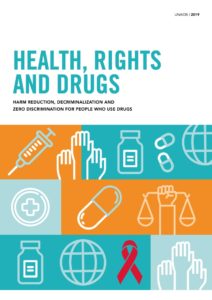 The new UNAIDS report, Health, Rights and Drugs, released yesterday in Geneva, also said that countries should decriminalize “drug use/consumption and the possession, purchase and cultivation of drugs for personal use,” linking criminalization to inadequate public health prevention and treatment.

Where drugs remain illegal, the report calls on countries to “adapt and reform laws to ensure that people who use drugs have access to justice, including legal services, and do not face punitive or coercive sanctions for personal use,” and that they are able to “access harm reduction and health services voluntarily.”

This report shows that despite a global decline in new HIV infections, HIV incidence remains high among the estimated 10.6 million people worldwide who inject drugs. One in eight injecting drug users are living with HIV and more than half are already living with hepatitis C, according to 2016 data contained in the report.

Some 99 percent of people who inject drugs lack access to basic prevention services, such as sterile needle-syringe programmes, drug dependence treatment and HIV testing and treatment, which could help stop new HIV infections.

“UNAIDS is greatly concerned about the lack of progress for people who inject drugs, which is due to the failure of many countries to implement evidence-informed, human rights-based approaches to drug use,” Michel Sidibé, executive director of UNAIDS, said in a press release. “By putting people at the centre and ensuring that they have access to health and social services with dignity and without discrimination or criminalization, lives can be saved, and new HIV infections drastically reduced.”

He urged UN member states to revisit and refocus their approaches to drug policy, linking human rights to public health.

The report charges that few UN member states have lived up to a 2016 agreement of the UN General Assembly Special Session on the World Drug Problem to establish effective public health measures to improve health outcomes for people who use drugs.

Meanwhile, criminalization and severe punishments for injecting drug users remain commonplace, the report finds, noting that roughly 20 percent of the people in prison globally are incarcerated for drug-related offences, even though decriminalization of drug use and possession for personal use would help increase uptake of preventive services. Around 80 percent of those who are in prison are serving time for possession for personal use alone, and some 35 countries still impose the death penalty for certain drug-related offences.

Despite the documented effectiveness of “harm reduction” strategies, investments in such measures are falling far short of what is needed for an effective HIV response, particularly by national health services, the report states. In 31 low- and middle-income countries that reported data to UNAIDS, 71 percent of spending on HIV services for people who use drugs was financed by external donors.

While some countries have made progress, most lag far behind, says the report, published just ahead of today’s Ministerial Segment of the UN Commission on Narcotic Drugs, which brings together 2000 participants from UN member states, parliament and civil society.

UNAIDS called for more funding of health systems’ harm reduction and HIV services that use community-led responses; remove drug-related and HIV-related stigma and discrimination; and promote greater engagement with civil society advocates “especially in places where repressive policies and practices are the norm.”

Recommendations to countries, further detailed in the report summary, included policies for: