MUSCAT/ AMMAN/CAIRO, 26 March 2019 – “In Yemen, since the beginning of the year until 17 March, nearly 109 000 cases of severe acute watery diarrhoea and suspected cholera were reported with 190 total associated deaths since January. Nearly one third of the reported cases are children under the age of 5. This comes 2 years since Yemen witnessed the world-largest outbreak when more than 1 million cases were reported. 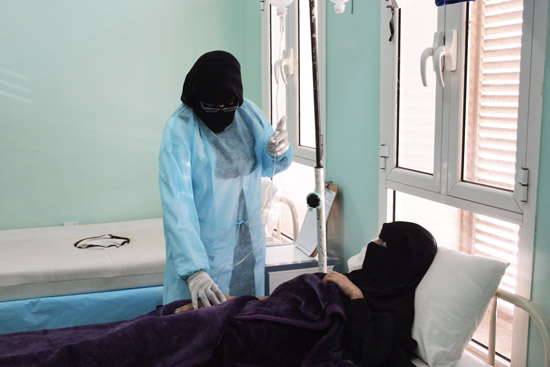 “We fear that the number of suspected cholera cases will continue to increase with the early arrival of the rainy season and as basic services, including lifesaving water systems and networks have collapsed. The situation is exacerbated by the poor status of sewage disposal systems, the use of contaminated water for agriculture, unreliable electricity to store food and families’ displacement as they flee escalating violence especially in Hudaydah and Tai’z.

“Our teams in Yemen are working day and night with a wide network of local partners to respond and stop the further spread and transmission of the diseases. Focusing on 147 priority districts, additional health, water, hygiene and sanitation supplies are being mobilized. Rapid response teams have been deployed. A total of 413 diarrhoea treatment centres and oral rehydration centres are operational in all 147 priority districts. Partners are repairing water and sanitation systems. In the past weeks, we scaled up chlorination activities to disinfect water in 95 priority districts and provided fuel and spare parts to keep going water supply and sanitation networks. A round of oral cholera vaccine campaign reached over 400 000 people in several districts. Meanwhile, community-based awareness raising reached 600 000 people in house-to-house campaigns since early 2019 to provide families with hygiene practices and improve reporting symptoms and seeking treatment.

“UNICEF and WHO are committed to continue scaling up the response to assist immediately the people affected and to prevent the disease from spreading further. We are doing everything possible to avoid the 2017 scenario including the timely use of proven effective measures, including oral cholera vaccination. However, we face several challenges, including the intensification of fighting, access restrictions and bureaucratic hurdles to bring lifesaving supplies and personnel to Yemen.

“UNICEF and WHO are calling to lift all restrictions on our humanitarian operations to respond to the spread of the disease and other areas. Our humanitarian teams must have full access to reach every child, every woman, every man in need of medical and other humanitarian assistance.

“Above all, we jointly reiterate the calls for the fighting to end. It is time for the 4-year long war to come to an end. If not, Yemen will continue to be trapped in a web of diseases, malice and sink deeper in endless humanitarian disasters, with the most vulnerable paying the highest price.