Geneva (2 October 2019) — The Medicines Patent Pool today announced the first of a two-step update of its database MedsPaL to include additional patented small molecule medicines following the publication of the World Health Organization (WHO)’s updated Model List of Essential Medicines (EML) in July. 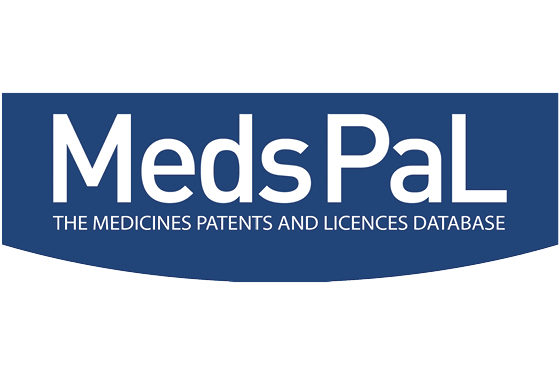 Launched in 2016, MedsPaL is a free resource on the intellectual property status of patented medicines included in the WHO EML for low- and middle-income countries (LMICs). Initially covering selected HIV, hepatitis C and tuberculosis medicines in LMICs, MedsPaL expanded to all patented treatments on the EML in 2017.

“We are passionate in our belief that public health stakeholders must have simplified access to accurate patent information on essential medicines in order to make informed decisions when the time comes to procure and supply those important drugs to the people who need them,” said Charles Gore, Executive Director of the Medicines Patent Pool. “MedsPaL now provides patent and licensing data covering 96 priority medicines in more than 130 low- and middle-income countries and includes over 8,000 national patents and patent applications.”

Information on patented biologics will be made available in a second update before the end of the year.

“It is fundamental that countries willing to provide greater access to essential medicines can refer to a reliable up-to-date database like MedsPaL to check the patent status of the medicines they want to procure,” said Nicola Magrini, Secretary of the WHO Essential Medicines List. “Access to medicines is certainly an important pillar of Universal Health Coverage and MedsPaL supports its efficient implementation at country level.”

About the Medicines Patent Pool

The Medicines Patent Pool is a United Nations-backed public health organisation working to increase access to, and facilitate the development of, life-saving medicines for low- and middle-income countries. Through its innovative business model, the MPP partners with civil society, governments, international organisations, industry, patient groups and other stakeholders, to prioritise and licence needed medicines and pool intellectual property to encourage generic manufacture and the development of new formulations. To date, the MPP has signed agreements with nine patent holders for thirteen HIV antiretrovirals, one HIV technology platform, three hepatitis C direct-acting antivirals and a tuberculosis treatment. The MPP was founded by Unitaid, which serves as sole funder for the MPP’s activities in HIV, hepatitis C and tuberculosis. Funding provided by the Swiss Agency for Development and Cooperation (SDC) for MPP’s feasibility study on the potential expansion of its licensing activities into patented essential medicines made the upgrade of MedsPaL to include other EML treatments possible.

For more detailed information on a given patent or its interpretation, MedsPaL users are encouraged to contact national patent offices or consult legal counsel.