A sharp decline in new COVID-19 cases was reported by China on Thursday, providing a glimmer of hope about the potential to still contain the epidemic – but only if the steady increase being seen in new cases abroad can now be brought under control.

As of 3 p.m. Central European Time (CET), official Chinese data recorded just 404 new cases of the novel coronavirus over the past 24 hours – for a total of 74,680 confirmed infections. That was in comparison to daily increases of 2,000-3,000 new cases seen over the past two weeks.

However, elsewhere in the world, 68 new cases were reported, for a total of 1,085 reported infections in 26 countries, as of 3 p.m. CET, with yet other cases reported later in the evening.  Most of the international increase was occurring in South Korea where the number of cases had more than doubled from 51 to 104 overnight.

Along with that, there were 8 reported deaths outside of Japan, including two elderly people in Iran, where 3 more coronavirus cases were also confirmed and six were under investigation – in a country that had previously not reported any infections whatsoever.

Two deaths also were reported among the 634 infected passengers of the Diamond Princess Cruise ship that was under a forced quarantine in Japan’s Yokohama harbor until just yesterday, when Japanese authorities began the slow release of the ship’s passengers and crew, which had originally numbered over 3600 people.

In South Korea, a press release by Centers for Disease Control officials said that many of the new Korean cases appeared to be centered around the Shincheonji Church of Jesus, a church with cult-like associations in the city of Daegu. A 61-year old church member had reportedly developed symptoms but refused to be tested, and subsequently infected at least 37 other church members, in what authorities described as a “superspreader” event.  Related to that, there were two clusters of infections within hospitals as well.

Already on Wednesday, the South Korean Ministry of Health and Welfare had put into place a new series of stringent infection control measures nationwide, including screening and limits on  gatherings in schools, leisure venues, and other public places. The Ministry also launched the distribution of hundreds of thousands of masks; stepped up COVID-19 testing in hospitals; issued travel warnings against visit to China’s high-burden COVID-19 provinces; and mandated screening of all inbound travellers, including installation of a self-diagnosis and locational app on their cell phones. Even stricter measures were imposed on Thursday in Daegu, where many public venues were closed and stores and streets remained empty.

Iranian Deaths May Be Followed By More Cases

The deaths of two elderly Iranians, in the city of Qom, were the first cases to be reported in Iran, making it the third country grappling with the virus spread in WHO’s Eastern Mediterranean Region, outside of Egypt and the United Arab Emirates. Later Thursday Iranian authorities reported, and WHO confirmed, 3 more COVID-19 cases in Qom.  Another six suspected cases in Qom, Tehran and the northern city of Babol were being tested and quarantined, Iranian News Agency IRNA, reported Thursday, for a total of 11.

Iranian authorities did not provide information as to the origins of the various infection clusters, with significant geographic spread. There were some suggestions, however, that the infections may have originated among religious pilgrims arriving to the Shiite holy city from Pakistan or other neighboring countries. IRNA, said that all religious schools in Qom had been closed to head off wider infection spread. Some 60 Iranian students were also evacuated from Wuhan earlier this month, but they were quarantined upon their return to Iran and had not displayed any health problems, authorities said.

Iran had continued to maintain business ties with Chinese companies willing to defy US sanctions. And unlike Saudi Arabia, an important Sunni Muslim pilgrimage destination, the Islamic Republic has not imposed restrictions on travel to our from China, although its national airline reportedly suspended flights several weeks ago, with the exception of humanitarian aid. 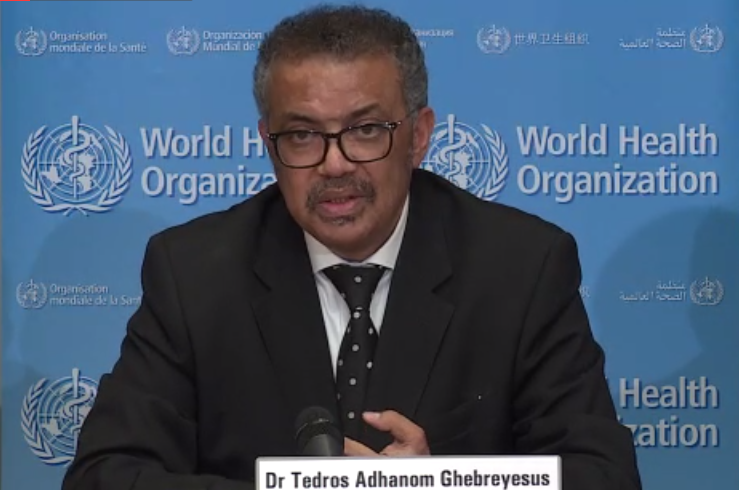 Speaking at a WHO press briefing on Thursday, WHO’s Director General Dr Tedros Adhanom Ghebreyesus expressed confidence in South Korea’s ability to manage the expanding outbreak there, saying “I think the number of cases are really management and I hope that South Korea will do everything to contain this outbreak at this early stage.”

Added WHO’s Oliver Morgan: “The number of cases in South Korea suggests that they are from several distinct clusters which the Ministry is following quite closely. Although the numbers are quite high, they are mostly linked to known chains, and Korean authorities are following up vigorously on all cases.”

WHO officials, however, sidestepped questions regarding Japan’s handling of the quarantine on the Diamond Princess, which has come under increasing fire as reports of poor disease control conditions aboard the ship seeped out with the gradual release of the 3,700 passengers and crew that had been put under lockdown.  The Diamond Princess COVID-19 cases constitute more than one-half of those reported abroad.

WHO’s Assistant Director General for Emergencies, Jaouad Mahjour, defended the Japanese objectives in the multi-week quarantine which saw infections aboard the ship spiral.

“The objective was to contain it on the ship, and not to prevent infection on the mainland,” he said, “They were heavily following the contacts to detect any case, and if they were detected they were taken it to the hospital for treatment.

“They were practicing drastic measures of quarantine and isolation of the cases to avoid close contacts and transmission… Now they are moving to the second stage,” he said, referring to the gradual release of passengers who have been found to be infection free, along with evacuation of those with mild cases to quarantine locations on land or in their home countries.

Meaanwhile, Dr Tedros confirmed that members of the United States Centers for Disease Control as well as the US National Institutes of Health were part of the international expert team assembled by WHO and now working alongside Chinese counterparts to support control of the epidemic, as well as means of improving containment, clinical care and cure rates.

He meanwhile emphasized that donors still have not responded to the WHO call for some $US 675 million to fight the epidemic, which threatens to spill over into a pandemic, saying that money is needed now for “simple public health solutions” that could begin “hammering the outbreak now” while a longer-term quest for a vaccine is pursued.

“Our objective is still containment,” said Dr. Tedros, speaking at the press briefing.  “We believe as WHO there is still a chance to contain this outbreak if we use the window of opportunity that we have now. We need to strike the balance, to finance the simple public health solutions now, but prepare for any eventuality by investing in a vaccine.”

Regarding the most immediate therapeutic solutions, WHO’s Clinical Management Lead, Janet Diaz, said that the results of clinical trials should be completed within three weeks on the two most promising COVID-19 treatments, including Gilead Sciences nvestigational drug remdesivir, as well as a popular HIV combination drug, lopanivir/ritonavir.  The lack of any effective antiviral treatment has plagued clinicians’ efforts to treat the most serious 20% of COVID-19 infections. These cases typically require lengthy hospitilization and often sophisticated mechanical ventilation procedures, with the most critical infections lead to multi-organ failure and death in 2% of cases, risks that increase along with age.