For the second day in a row, new COVID-19 cases outside of China exceeded those inside the country on Thursday. According to the latest data Thusday evening, there were now 4,053 cases in 44 countries outside of mainland China, and at least 54 deaths.

The biggest hotspots remained Italy, Iran and Korea, but shifting numbers in those countries throughout the day made tallies more difficult. Korea, with the largest case tally, reported another 449 new cases Thursday morning, while a 6 p.m. bulletin noted that there had been another 171 cases since the morning.  That made for a total of 1,766 cases in the country.

And over the past 24 hours, seven more countries reported cases for the first time: Brazil, Georgia, Greece, North Macedonia, Norway, Pakistan and Romania.

“We are at a decisive point,” said Dr Tedros Adhanom Ghebreyesus in a daily WHO press briefing on the COVID-19 crisis. “My message to each one of these countries is: This is your window of opportunity.  If you act aggressively now, you can contain this virus. You can prevent people from getting sick. You can save lives. So my advice in these countries is to move swiftly.”

While the virus is more contagous than other recently emerged pathogens such as Ebola or SARS, a recent seroimmunological study in China’s Guangdong indicates that it still is not being transmitted as widely or as easily as seasonal flu or the common cold, the WHO Director General noted.

In the study, scientists tested more than 320,000 blood samples from community members, and found that only .14% were positive for COVID-19 antibodies.

“The evidence we have is that there does not appear to be widespread community transmission,” said Dr Tedros. “This suggests that containment is still possible. Indeed, there are many countries that have done exactly that. There are several countries that have not reported a case for more than two weeks,” he said, noting that those included: Belgium, Cambodia, India, Nepal, Philippines, the Russian Federation, Sri Lanka and Viet Nam.

“No country should assume it won’t get cases. That could be a fatal mistake, quite literally.”

In London, meanwhile, the director of the Wellcome Trust, one of the world’s largest funders of public health research, called upon the World Bank to open up $10 billion in funds from its Pandemic Emergency Finance Facility, to make critical investments in diagnostics and therapeutics needed by low-income countries to combat the virus.

Jeremy Farrar, Director of Wellcome, also called upon the International Monetary Fund and Regional Development Banks to step up to the bat with funding. Until now, the global development banks have been largely silent regarding the crisis.

“An urgent commitment of $10 billion, with more to follow as needed, is essential from the World Bank to underpin the public health measures in low- and middle-income countries, coordinated by the WHO alongside critical investment in diagnostics, therapeutics and vaccines,” said Farrar, in a press release. “Anything less leaves us at risk of much greater costs later and long-term catastrophe. The sums are considerable. The decision to release funds should not be taken lightly, but the stakes could not be higher.

“The continued rapid spread of this virus is extremely challenging to control and poses an unprecedented global challenge – to health systems, economies and to societies around the world,” Farrar added.  “Researchers around the world are increasing our understanding of this virus at an incredible pace. The World Health Organization and governments around the world have stepped up their response, implementing crucial public health measures which have undoubtedly reduced the impact and bought everyone critical time, we must use this window of opportunity.

“But now, what we are really missing, is tangible, high-level funding and support from global financial institutions including the World Bank, Regional Development Banks and the International Monetary Fund. The possible impact of this coronavirus is far beyond a health emergency – it’s a global crisis with potential to reach the scale of the global financial crisis of 2008. These institutions, designed to act as the world’s insurance policy, were quick to act then and can no longer stand by in the face of a crisis that is no less threatening.

“By instigating a bigger and more united multilateral effort, we can ensure no country is left behind, in particular those with fragile health systems in low and middle income countries.”

Virus Does Not Respect Borders – Key Measures Countries Should Take

“This virus does not respect borders. It does not distinguish between races or ethnicities. It has no regard for a country’s GDP or level of development,” added Dr Tedros.  “Our message is that this has pandemic potential… But we are not hopeless. We are not defenseless. There are things every country and every person can do.”

He said key measures countries should be prepared to take include readiness to:

“There are some vital questions that every country must be asking itself today,” said Dr Tedros. “Are we ready for the first case? What will we do when it arrives? Do we have an isolation unit ready to go? Do we have enough medical oxygen, ventilators and other vital equipment? How will we know if there are cases in other areas of the country?”

“Do we have the right measures at airports and border crossings to test people who are sick? Do our labs have the right chemicals that allow them to test samples? Are we ready to treat patients with severe or critical disease? Do our hospitals and clinics have the right procedures to prevent and control infections? Do our people have the right information? Do they know what the disease looks like?  … These are the quesitons that every health minister must be ready to answer now.”

So far, he said, WHO had shipped testing kits to 57 countries and personal protective equipment for health workers to 85 countries that needed such supplies.  More than 80,000 health workers have undergone training with online WHO courses.

“Once again, this is not a time for fear. This is a time for taking action now to prevent infections and save lives now,” the Director-General said.

While the fatality rate for the virus has averaged around 2% inside China, some countries outside of China have seen far higher death rates.

In Iran, notably, some 26 people are reported to have died as of Thursday out of a total of 245 infections.  That 10% average may, however, be indicative that “the extent of infection may be broader than what we are seeing,” said WHO’s Emergency Head, Mike Ryan.

China was set to ship some 20,000 COVID-19 test kits to the Islamic Republic to bolster its testing facilities, announced the Ministry of Foreign Affairs Spokesman Abbas Mousavi, on Thursday. Meanwhile, however, authorities also banned the entry of Chinese nationals into Iran, in an apparent effort to reduce any influx of new cases from abroad.

Iran has temporarily shut down schools, universities and cancelled mass cultural and sports gatherings across the country, in and effort to curb the disease.

Japan, the country with the fourth largest case load of COVID-19 infections, meanwhile, announced that it was closing all of its universities as well as schools and high schools until March 2 in order to contain further spread.

Trump, who on Wednesday, declared at a COVID-19 press conference that “the risk to the American people remains very low,” on Thursday was reported by the New York Times to have told all of the top health officials involved in COVID-19 response that any statements they made had to be cleared with the White House. 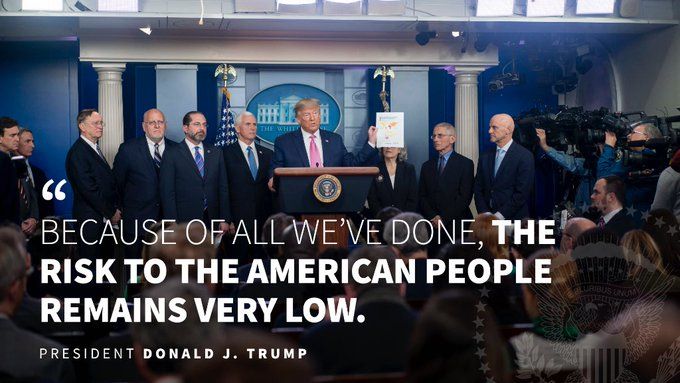