Funding to develop new drugs for some of the world’s leading infectious disease killers, such as HIV/AIDS, TB and malaria, reached a record high of US $4 billion in 2018, with private sector investment driving much of the increase, according to the 2019 G-FINDER Report, which tracks such investments globally.

However, investments in neglected tropical diseases (NTDs) – a subset of debilitating but lesser-known parasitic, viral and bacterial infections – have plateaued in the past two years, and even declined by US $34 million over the last decade, according to the findings in the report, launched today by Australian Policy Cures Research group.

That was sobering news as the global health community celebrated the first-ever World NTD Day, to mark the need for more attention to 20 of the world’s most neglected diseases that affect over 1.5 billion of the world’s poorest and most vulnerable people.

The G-FINDER report is the most comprehensive annual review of trends in investments in neglected disease research, and it is used widely by national governments, industry, civil society, and the World Health Organization to identify gaps in progress and areas where investments need to be increased.

Reactions to the news were mixed, in line with the good and bad news that the report contains.

“Great to see continued donor commitment to malaria R&D—critical, if we are to accelerate progress,” said David Reddy, CEO of Medicines for Malaria Venture (MMV). Malaria along with tuberculosis and HIV/AIDS are among the biggest so-called “neglected diseases.”

But the report also reflects the comparatively low priority that NTDs are receiving, said Nathalie Strub-Wourgaft, director of NTDs at the Drugs for Neglected Diseases Initiative (DNDi). This is despite the fact that such NTDs include some major global health threats such as dengue disease, transmitted by mosquitoes, as well as infections such as leishmaniasis and Chagas that are a cause of debilitating chronic illness and death among the world’s poorest.

“Flatlined funding for NTDs is proof that the world is not paying enough attention to the biomedical needs of the most vulnerable,” Strub-Wourgaft said. “It will be impossible to alleviate poverty, or achieve gender equity, quality universal health coverage, or any of the other Sustainable Development Goals (SDGs) without urgent course correction, and increased, sustained investment in R&D for NTDs.”

The G-FINDER report tracks investments across 36 diseases including HIV/AIDS, tuberculosis, and malaria – which together represent the world’s biggest infectious disease killers. The so-called “big three” received a whopping US $2.7 billion in R&D investments in 2018, representing more than two-thirds of the total investments in neglected diseases.

The latter third of R&D investment was split between the remaining 33 diseases. Funding for the 20 diseases categorized by the World Health Organization as NTDs plateaued or even fell. Investment in disfiguring and painful skin diseases such as leprosy, cryptococcal meningitis, and Buruli ulcer dropped “across-the-board.” Trachoma, the leading cause of blindness caused by the common bacteria Chlamydia trachomatis, also saw decreases in R&D funding, along with cryptococcal meningitis, leptospirosis, and rheumatic fever.

Dengue, a WHO-categorized NTD listed as one of the top ten threats to global health in 2019, saw a funding drop of $3.6 million in 2018 – once again the largest decrease in funding for a single disease for at least two years in a row.

Overall, the report notes “the extremely small quantum of funding these diseases receive” overall. It states that “there is little chance of meaningful progress in developing missing tools – especially drugs and vaccines – when total global investment in some of these diseases is just $2 million annually.”

On a brighter note, while NTD research financing remains dominated by public sector sources, industry investments seem to be slowly increasing. According to the report, some US $57 million of the growth in multinational pharma companies’ investments went to diseases outside of the “big three.”

“I am pleased to see that investment by multinational pharmaceutical companies reached its highest-ever level last year. However, we are far from having all the tools we need to control and eliminate NTDs,” said Thomas Cueni, director general of the International Federation of Pharmaceutical Manufacturers and Associations (IFPMA), in a press release.

“‘Collaboration” is the watchword: cross-sectoral cooperation and public-private partnerships are more important than ever if we want to further catalyze innovation, harness the power of science and technology, and help unlock new ways of reaching a world free of NTDs,” Cueni said.

Investment by public and philanthropic, as well as the private sector, all reached record highs in 2018, according to the report, although contributions varied by country and organization.

Particularly significant was the positive trend in investments for critical late-stage drug development, including clinical trials and post-registration studies, filling a historical gap in the last steps that are usually required to bring novel treatments to patients.

High-income countries represented the lion’s share of the US $2.6 billion in funding reported by the public sector, with all three of the largest public donors moderately increasing their investments. The United States made the biggest investment in R&D at US $1.78 billion, although the recorded increase in funding was also partly attributable to improved reporting by the US National Institutes of Health. The second largest donors were, once again, the United Kingdom and the European Commission, providing some US $230 million and US $134 million respectively.

Japan, Australia, and Brazil also upped their financing for neglected diseases, although France and The Netherlands both reduced funding by about US $9.1 million. Two of the largest lower-middle income donors – India and South Africa – also reduced their contributions by US $9.4 million and US $1.9 million respectively.

Philanthropic funding for neglected disease R&D totaled US $760 million in 2018, an increase of US $43 million, reaching its highest level in a decade. The two historically largest donors – The Bill and Melinda Gates Foundation and The Wellcome Trust – jointly accounted for 93% of such contributions. Both organizations also increased their funding in 2018: the Gates Foundation by US $36 million and the Wellcome Trust by US $11 million.

Meanwhile, more than 250 public and private sector groups marked 30 January as the first World NTD Day, devoted to raising awareness of the world’s most neglected diseases.

While important new treatments have recently come on line for some NTDs, such as sleeping sickness, as well as Chagas disease and leishmaniasis, NTDs continue to be responsible for thousands of preventable deaths each year. 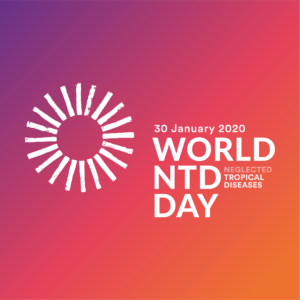 NTDs also cause physical impairments that perpetuate the cycle of poverty by keeping millions of adults out of work and children out of school, costing developing economies billions of dollars each year, organizers of NTD events, led by Abu Dhabi, noted in a press release. Despite their prevalence, NTDs have not always been at the top of public health priorities, advocates say. World NTD Day aims to engage the general public in the effort to ensure people at risk for NTDs no longer remain “neglected”.

“World NTD Day will raise awareness and rally the general public behind the urgent need to end NTDs, helping to keep the issue high on the global agenda. Our commitment to ending NTDs is not just about disease elimination. By removing the barrier of disease, we can help alleviate poverty and uplift entire generations,” said Mohamed Mubarak Al Mazrouei, Undersecretary of the Crown Prince Court of Abu Dhabi, which sponsored the first-ever World NTD events, in the press release.

The date of January 30th was chosen for the first-ever global event, as it is also the anniversary of a landmark 2012 London Declaration on NTDs, which unified partners, countries and disease communities to push for greater action on ten of the highest-priority NTDs. Organizers say that 2020 will be a decisive year for the advancement of NTD eradication. This year, the World Health Organisation is expected to launch a new NTD strategy, including roadmap and goals for 2030.