A new study has analysed antibiotic sales data from 70 middle-income and high-income countries, and found variation in the use of antibiotics to treat children, with some countries deviating from World Health Organization recommendations on antibiotic stewardship.

The study, Consumption of oral antibiotic formulations for young children according to the WHO Access, Watch, Reserve (AWaRe) antibiotic groups: an analysis of sales data from 70 middle-income and high-income countries, was published this week in the Lancet Infectious Diseases journal. It was conducted by Yingfen Hsia, Prof Mike Sharland, Charlotte Jackson, and Julia A Bielicki, Prof Ian C K Wong, and Nicola Magrini, a group of UK and Swiss researchers and academics.

The study states that it is “the first attempt to develop simple metrics of global child community antibiotic use based on the WHO AWaRe classification,” which groups antibiotics into the categories of ‘Access’, ‘Watch’ and ‘Reserve’.

More information on the AWaRe classification from the WHO can be found here. 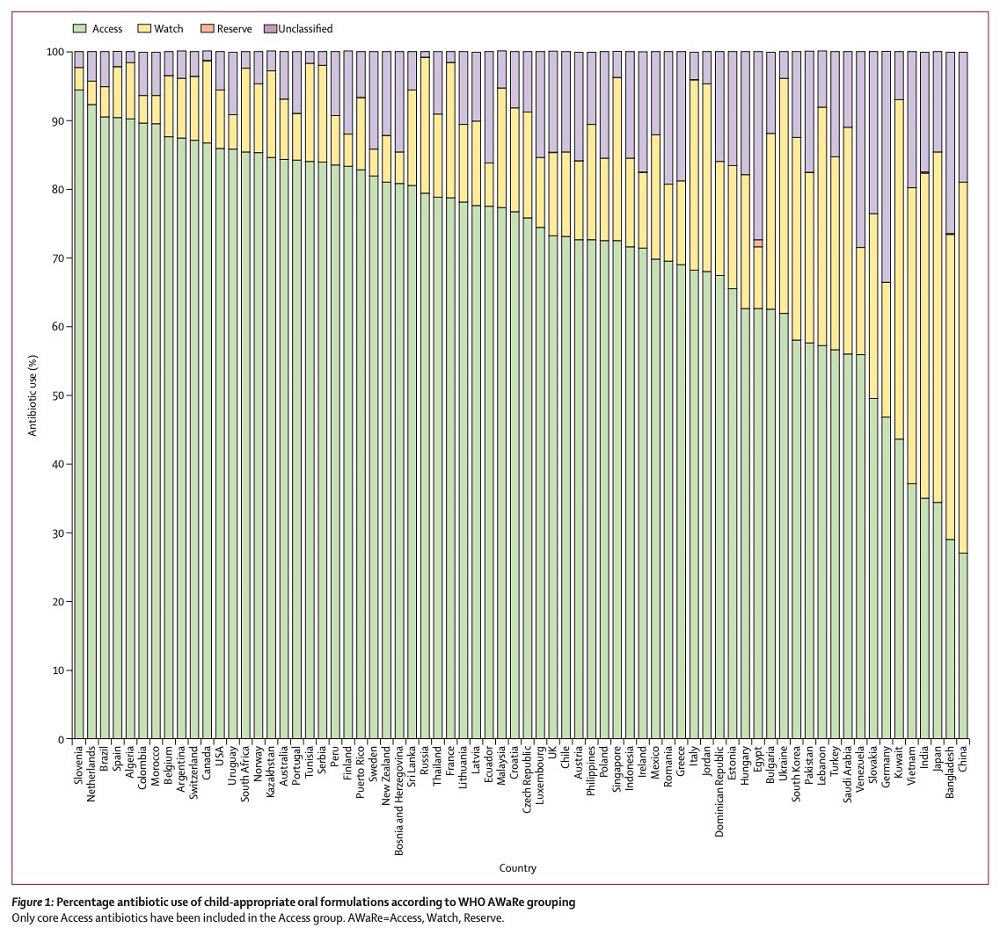 The study has focused particularly on antibiotics in children, because “young children have been identified as the highest users of antibiotics,” and therefore “establishing patterns of antibiotic use for the youngest age group would have the largest impact for antibiotic stewardship and antibiotic access,” it explains.

The study notes that “at least two-thirds and up to 90% of outpatient antibiotic prescriptions in young children are for respiratory tract infections … in which antibiotic treatment might not be required in many cases.” However, in malaria-endemic low and middle-income countries, it found that “undifferentiated fever” is a “more frequent reason for an antibiotic prescription.”

The study concludes with general recommendations that “countries with low access percentages could identify opportunities for greater use of these antibiotics,” countries “with moderate or high access percentages but low amoxicillin index might prefer to focus on promoting the use of amoxicillin, especially for respiratory tract infections,” and countries with a “low access-to-watch index” could reduce “unnecessary use of Watch antibiotics.”

“WHO strongly encourages use of ‘Access’ antibiotics to treat the majority of infections for children and adults as they are affordable, generally less toxic and less likely to drive future antibiotic resistance. Providing country policymakers with evidence on what antibiotics are being prescribed in their country is an important first step to help countries tackle inappropriate prescribing of antibiotics. This in turn will help countries deliver their National Action Plan on antimicrobial resistance and ensure antibiotics remain available and effective for generations to come,” Manica Balasegaram, executive director of Global Antibiotic Research and Development Partnership (GARDP), said in a press release on the study.

Image Credits: WHO / M. Edwards, WHO.