To reach these missing children in the so-called “last mile” of worldwide polio eradication, the new strategy will prioritise efforts to better reach communities that are remote – where there has been insufficient security to safeguard frontline workers as well as social resistance to immunization – while improving coordination to address migration across borders.

The new plan will create a new Afghanistan-Pakistan hub to consolidate and coordinate eradication efforts; expand partnerships to address development needs “within and beyond the health sector;” and form “rapid response teams” to increase the speed and effectiveness of the polio outbreak response.

The new plan, Polio Endgame Strategy 2019–2023: Eradication, integration, certification and containment, aims to “lay the groundwork for a sustainable future free of polio,” with the ultimate goal to “complete the eradication and containment of all wild, vaccine-related and Sabin polioviruses,” according to a GPEI news release.

“While over 18 million people who would have been paralysed by polio are walking today as a result of the eradication programme, we have not yet reached zero – and our mission to reach every last child remains as urgent as ever,” the GPEI Polio Oversight Board states in the strategy’s forward. 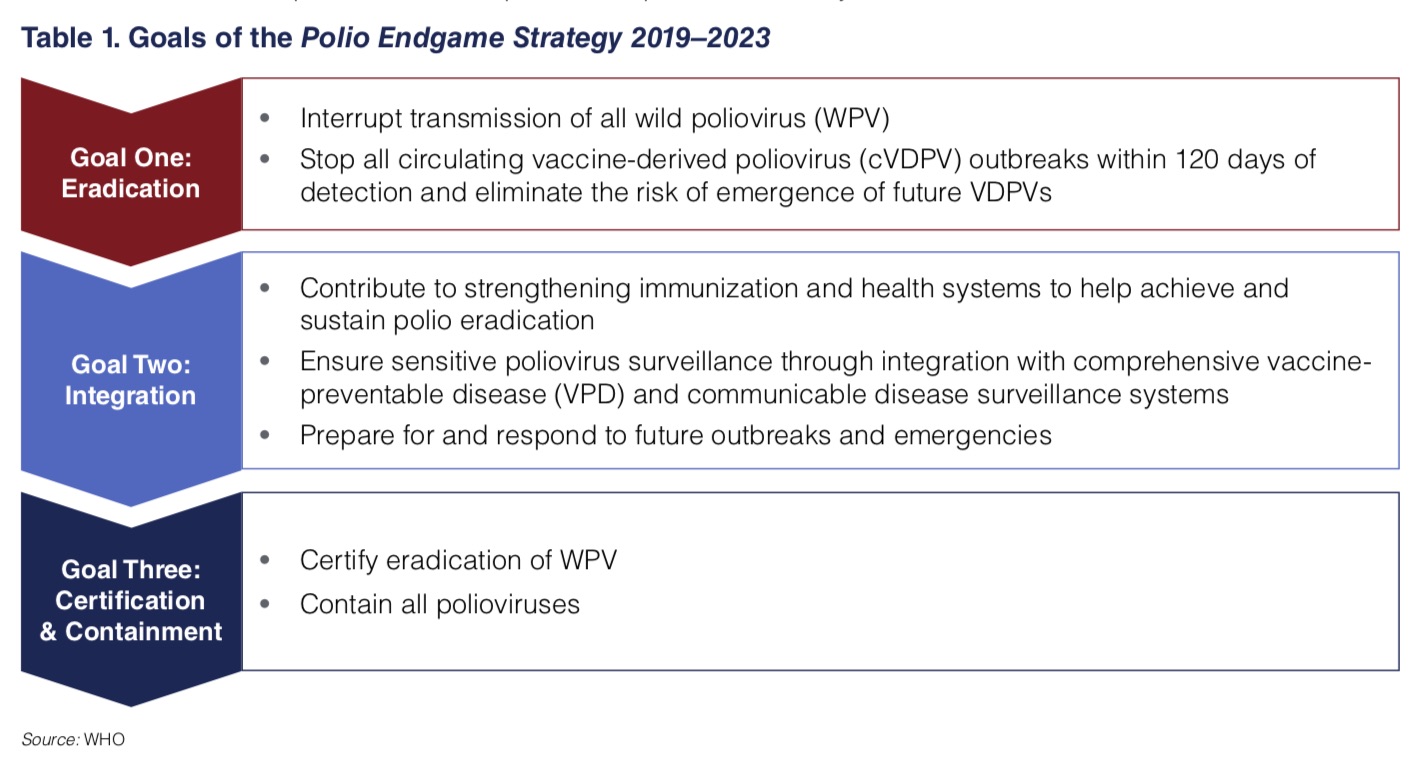 Launched in 1988, the Global Polio Eradication Initiative is a public-private partnership led by national governments with five partners: the World Health Organization (WHO), Rotary International, the US Centers for Disease Control and Prevention (CDC), the United Nations Children’s Fund (UNICEF) and the Bill & Melinda Gates Foundation.

According to the plan, GPEI will also work to improve immunization coverage by collaborating with other partners such as Gavi, the Vaccine Alliance, a well as humanitarian and emergency response communities.

The new plan will be discussed later this month at the upcoming 2019 World Health Assembly, scheduled for 20-28 May in Geneva, Switzerland.

According to the plan, the “primary underlying challenge” in last mile efforts to eradicate wild poliovirus transmission (WPV) is “missing children in the delivery of polio vaccines.”

Afghanistan and Pakistan are the last two countries with reported ongoing WPV transmission, and the polio eradication programme has not been able to immunize every child for several reasons:

In Nigeria, where the polio outbreaks are due to circulating vaccine-derived poliovirus, “areas of Borno state remain totally inaccessible to vaccinators,” the strategy states. “However, even when the programme does have access, pockets of vaccine refusals are growing where, due to misinformation, mistrust, cultural beliefs, fatigue or other priorities, caregivers turn vaccinators away at the door.”

To address these challenges, the strategy will implement “key innovations to focus efforts on the endemic countries and provide support to prevent and stop outbreaks in the Eastern Mediterranean and African regions,” which include:

Funding the 5-Year Strategy Will Require US$ 5.1 Billion

To reach its goals, the overall cost of the strategy from 2019 to 2023 will be US$ 5.1 billion, and the GPEI partners have committed to advocating and raising these resources to fully finance the strategy.

“With full implementation and financing, the Polio Endgame Strategy 2019–2023 can consign polio to the history books. But to achieve this, all of us – country, GPEI partner, donor, community leader, parent, vaccinator – must promise to dedicate ourselves fully and irrevocably to one clear goal: a world free of polio for all children everywhere,” the oversight board said.

To support the strategy and encourage additional financial commitments, “a pledging event will be hosted this November at the Reaching the Last Mile Forum in Abu Dhabi, a gathering of leaders from across the global health space held once every two years,” according to the release. 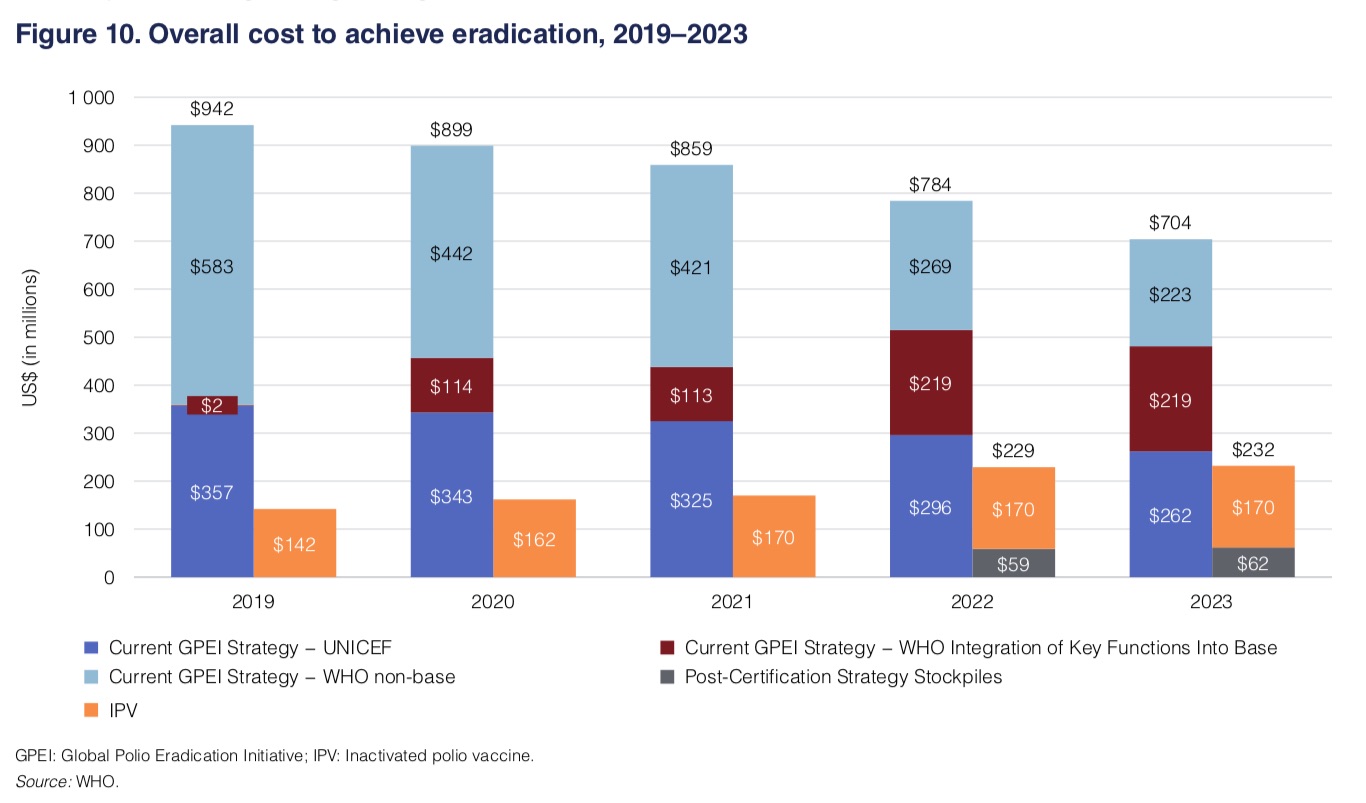