The novel coronavirus has been officially named by the World Health Organization as COVID-19, in the first day of a global consultation with about 400 researchers and public health experts charged with designing a coherent way forward to confront the expanding epidemic.

However, as the case count rose by Tuesday afternoon to 42,747 people with confirmed infections in China and 394 abroad, and the death count rose to 1018 people, according to the latest Beijing government data, there were still far more questions than answers about the new virus, which first emerged in December 2019 in a Wuhan, China food market selling wild animals.

“The main outcome we expect from this meeting is not immediate answers to every question that we have,” said World Health Organization Director General Dr Tedros Adhanom Ghebreyesus, at a Tuesday press briefing following the first day of the Global Research & Innovation Forum convened by WHO in Geneva.  “The main outcome is [to be] an agreed roadmap on what questions we need to ask, and how we will go about answering those questions.”

While WHO and other partners have all placed a great deal of emphasis on the transparent sharing of scientific knowledge about the virus to rapidly advance solutions to the epidemic, the two-day forum ongoing Tuesday and Wednesday in Geneva has been closed to the public, and participants were reportedly asked to avoid speaking to the media.

“We were instructed not to speak externally really but what I’ll say is that the atmosphere was quite good and the report will be quite action focused,” one participant from a leading global health research institution told Health Policy Watch.

Key questions that remain unanswered by WHO, its global partners and advisors cover some of the most characteristics of the virus as well as the outbreak dynamics, such as:

How contagious is the virus and what preventive measures can the public take? And how easily can asymptomatic carriers pass it to others? WHO’s Dr Tedros stressed in Tuesday’s press briefing that the virus can be passed by the respiration of tiny airborne droplets from an infected person – and that makes it far more contagious than diseases such as Ebola, which raged for a year in the Democratic Republic of Congo, but now appears to be finally on the wane. At the same time, besides hand washing and maintaining distance from people who are visibly ill, WHO and other public health authorities have so far been unable to issue clear guidance as to what else the general public can do to protect themselves from the virus. For example, WHO experts have said that there is mixed evidence about the extent to which simple surgical masks may or may not provide an added measure of protection – despite their increasingly widespread use not only in China, but also in other potential outbreak hotspots, as well as on some airline carriers.

How long is the virus incubation period? Most scientists have estimated 14 days, but there have been some estimates of up to 24 days. However, 24-days so far appears to be an outlier figure, noted WHO’s Sylvie Briand, in a briefing on Monday,

What is the actual death-rate?  In terms of a simple calculation of the numbers of the confirmed infections as compared with those who died, the fatality rate has hovered around 2.4%, which is higher than the death rate for seasonal flu, running at about .05% in the US this flu season, and for which vaccines also exist.  Better tracking of the COVID-19 virus, and inclusion in records of more asymptomatic cases, which seem to be common, might yield a lower fatality rate, some WHO experts have suggested. At the same time, the death rate could also prove to be higher, cautioned Gabriel Leung, infectious disease specialist and dean of medicine at the University of Hong Kong, writing in the New York Times.  He noted that in the early days of the SARS epidemic, experts believed that the case fatality rate was hovering between 2-3 percent. It later proved to be much more deadly – with the fatality rate for SARS in Hong Kong a “staggering 17 percent.”

Why are there variations in the death rate of those infected in China and abroad? Among the latter 394 cases, only one person has died. The disparity has been attributed by some scientists to the fact that most of the cases abroad were among travelers who were presumably younger and more fit, whereas the cases in China have involved the whole population.

What is the age and gender breakdown of those seriously ill?  While WHO has reported that about 15% of cases are serious enough to require hospitalization, and these tend to be older, no more detailed breakdown of cases has released. However, a study published last week in JAMA of 138 people hospitalized in Wuhan in January noted that their median age was 55 years of age.  This suggests that a significant proportion of those becoming seriously ill could be younger than had been assumed. Slightly more than half of the hospitalizations were men. And while most people recovered, they also required long periods of hospital care, averaging ten days or more, the study noted – something that could overwhelm a health care system with weaker hospital capacity.

What about children?  There have not, however, been many reported cases in children, said Nancy Messonnier, director of the US Centers for Disease Control’s Center for Immunization and Respiratory Diseases, speaking at a panel on the coronavirus Tuesday at the Aspen Institute.  That should be good news, although if the cases are mild or asymptomatic, then children could also “seed” cases to other more vulnerable family members in the household.

What is the animal source of the novel infection?  WHO’s Sylvie Briand said in Tuesday’s briefing that the original source for the new coronavirus had likely been a bat, which are common carriers of many different types of coronaviruses. However, an assessment by Chinese researchers last week in Nature, and also cited by Leung, points to the endangered species of pangolins, or other small mammals, as likely the point of contact with humans. Pangolins are commonly hunted and sold in Asian live animal markets for their meat, while their scales are used as an ingredient in traditional medicines.

As soon as a public health emergency was declared on 30 January, WHO swung into action to equip low-income countries, particularly in Africa, with diagnostics to identify the virus in suspected cases. The results have been impressive, in just two weeks, 13 African countries as well as Iran have been equipped with the laboratory tests, and technicians from a dozen African countries were trained in their use last week. Another 150,000 tests were about to be shipped to more than 80 labs worldwide, WHO has said. Personal protective gear for health workers, critical to infection control, is also being shipped from WHO emergency stocks to countries lacking strong supplies.

However, if cases clusters appear in Africa, or expand more widely in hotspots of South-East Asia and elsewhere – other serious capacity issues will emerge for health systems, including quarantine and containment facilities, which are expensive to mount and maintain. There is also a lack of hospital respiratory equipment to support those with pneumonia-like symptoms – one of the most common features of serious illness, one WHO official noted on Tuesday.

“Severe cases tended to be taken in charge by an intensive care unit where you have to provide the respiratory equipment, and this capacity is very limited in many African cities,” said Michel Yao, head of emergencies in WHO’s African Regional Office, in an interview with National Public Radio. That lack of supportive care could lead to a much higher death rate in poor and underserved regions.

At least a dozen R&D biopharmaceutical companies are working on vaccines, antivirals or other treatments to confront the fast-spreading coronavirus, said Thomas Cueni, director general of the International Federation of Pharmaceutical Manufacturers, in an interview Monday with Health Policy Watch. The Chinese government has, meanwhile, authorized initial research or exploratory trials of some 30 existing anti-viral treatments developed to treat other serious viruses, including Ebola and HIV, as well as other coronaviruses such as SARS and MERS. Still, it may be some time before one or two of those being tested shows evidence of efficacy against this new virus.

And in the absence of effective medicines, providing good supportive care and preventing further infection spread, will be the main things that health care systems can do to combat the virus.

And that is why, for the moment, WHO’s Director General is placing his bets on “containment” strategies to slow the virus spread outside of China, what he is wont to call “a window of opportunity.”

“We are having a real problem in our hands, and we must take what is happening now seriously,” he said.  “I have a great concern that if this virus makes it to a weaker health system, it will create havoc. It will. For now, it doesn’t seem so, but this doesn’t mean that it will not happen. It depends on how we lead this response and how we respond to the outbreak,” he said.

Describing the virus as “Public Enemy Number 1,” the WHO Director General said: “The world talks about terrorism.  But to be honest, a virus is more powerful in creating economic, social and political upheaval than any terrorist attack.” 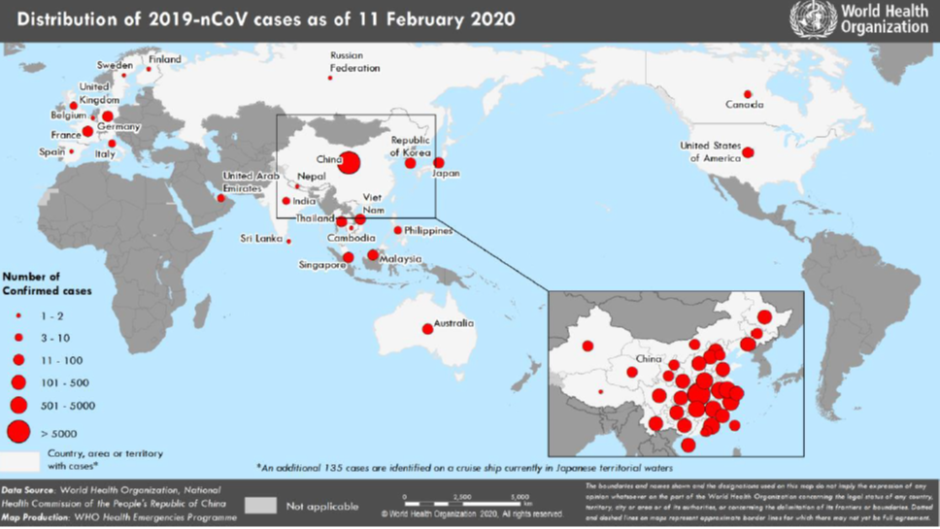