After a grueling 34 hours of nearly non-stop negotiations, World Health Assembly delegates appeared to be close to a final agreement Saturday evening on a resolution supporting more systematic disclosure of prices for medicines purchased and sold on national and global markets; a “drafting group” is expected to reconvene Monday morning to put the finishing touches on the new text.

But language suggesting that countries require pharmaceutical manufacturers to publish data on the costs of research and development – costs that are often used to justify high end-user medicines prices – appeared likely to be muted in the final version, which now reportedly has 18 country co-sponsors.

The clause in the original draft resolution, as proposed by Italy in April, had recommended that countries require industry disclosure of such costs at the time of national drug registration.

However, after widespread opposition from countries including the USA, United Kingdom, Germany and others, delegates said that support was building for voluntary disclosure of “inputs across the value chain,” as per a phrase proposed by India.

“There will be a resolution,” a delegate from one of the countries co-sponsoring the resolution told Health Policy Watch as a weary group of about a dozen negotiators emerged from a 10-hour drafting session Saturday evening at Room 24 of Geneva’s UN Headquarters, the Palais Des Nations.

“It is a compromise but that is the nature of negotiation. It is better than no resolution at all,” he said. 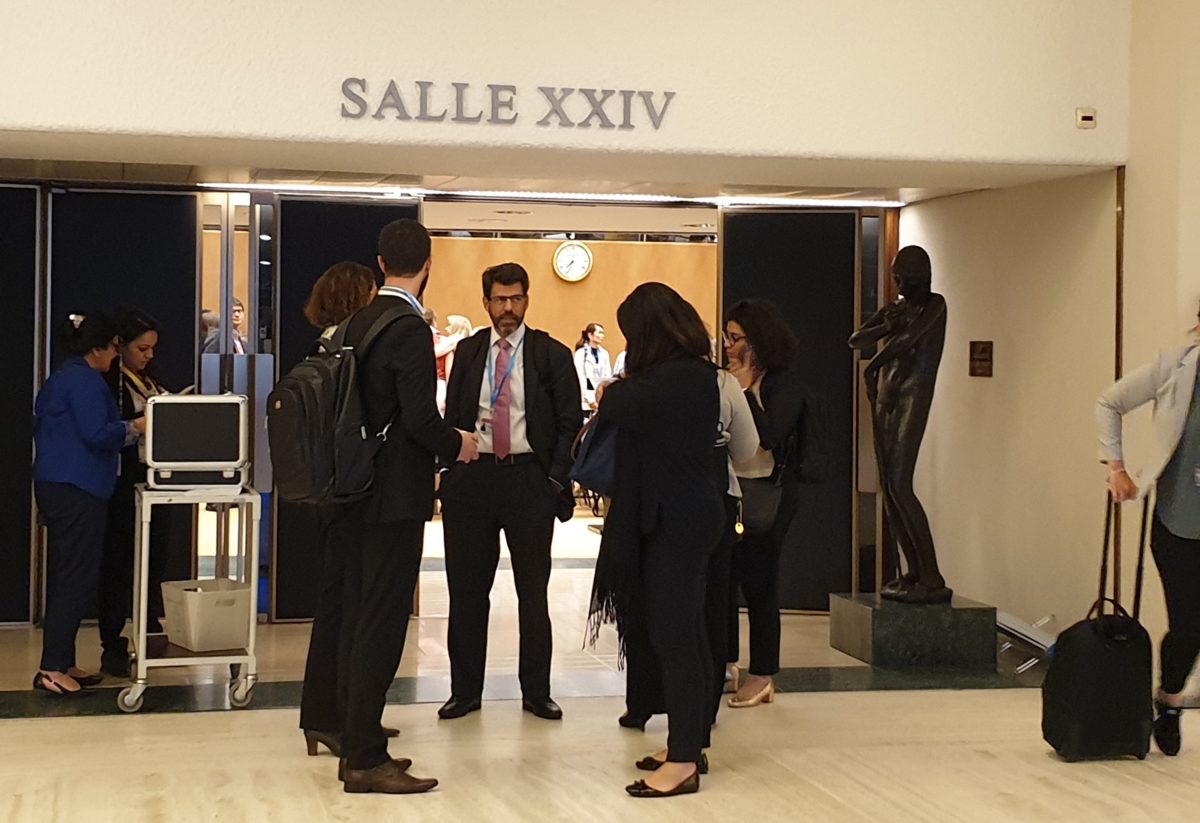 Delegates had been closeted away since 9 a.m. Saturday morning as the loosely organised “drafting group” struggled to come up with a consensus draft in order to get the proposal to the floor by Monday so that it could be assured of approval by Tuesday 28 May, the closing day of the 72nd World Health Assembly.

At noon on Saturday, that drafting group had counted over 50 delegates, and some participants complained that the text had swelled almost as much to include too many lofty-sounding, but possibly extraneous clauses about technology transfer and local production of medicines.

However important, critics said that loading too many “asks” onto the text could potentially weaken the core purpose of the resolution, which was supposed to be about more transparent disclosure of prices for medicines and now-secret costs of R&D, which advocates argue can help countries negotiate better drug purchases, and thus drive down costs for hundreds of millions of people worldwide who currently cannot access critical drug treatments for cancers and other noncommunicable diseases.

Then, as numbers of negotiators dwindled throughout the long afternoon, progress advanced. By evening, only about a dozen members of the drafting group remained, including the USA, India, Switzerland, and France, as well as representatives from other key regional blocs in Latin America, Africa and Asia.

But those delegates were smiling as they finally emerged from the room, in near agreement on a final text, they said. While that text was only to be published on Monday, they said it was almost clean of the nearly 100 caveats and comments that had been added to last week’s draft.

“Lots of compromises were made to accommodate countries that are protecting drug companies, so one should wait to see the actual agreement before making too many judgments,” said Jamie Love, Director of Knowledge Ecology International –  one of the activist groups that waged a heated battle over the resolution in past weeks – in the KEI newsletter posted just after negotiations ended.

“We are waiting to see the text, which is now ironically secret. But we expect that this effort, led by Italy, and strongly supported by Brazil, India, Spain, South Africa, Norway, Thailand and many other countries, and with constructive engagement by Switzerland and the United States, among the several countries that have large domestic pharma industries, will move this issue forward.”

Love predicted that the final, agreed-upon text would make “considerable progress in some areas, including but not limited to [market] price transparency.” But he also anticipated that the text about disclosure of the costs of clinical trials would be “pretty disappointing, on a very important topic.”

“Pretty shocking that some countries, like US, Switzerland, Germany, the UK, Japan, Denmark, Sweden, the Netherlands, Australia, sought to block language that would ‘urge’ countries to require disclosure of clinical trial costs, and I am waiting to see what if anything was done on disclosure and reporting of government R&D subsidies,” he noted.

“If governments like the US, the UK and the Netherlands are complaining about high prices on drugs for cancer and rare diseases, why not have the cost of trials data that would greatly improve their bargaining power?” he asked.

Some countries, however, also cried foul over the tone of the campaign that had been waged by activist groups, led by KEI, and Médecins Sans Frontières (MSF/Doctors Without Borders), but also involving NGOs in France, Germany, the UK, and Africa.

The campaign had initially included an open letter addressed to all WHO member states, as well as press briefings and press releases. Last week, letters targeted the health ministers of Germany, the UK, and France, perceived as leaders in opposing the measure. Over the weekend, feelings climaxed in a vigorous campaign on Twitter and other social media, including some targeted personal attacks on specific delegates, including in a French satirical blog. 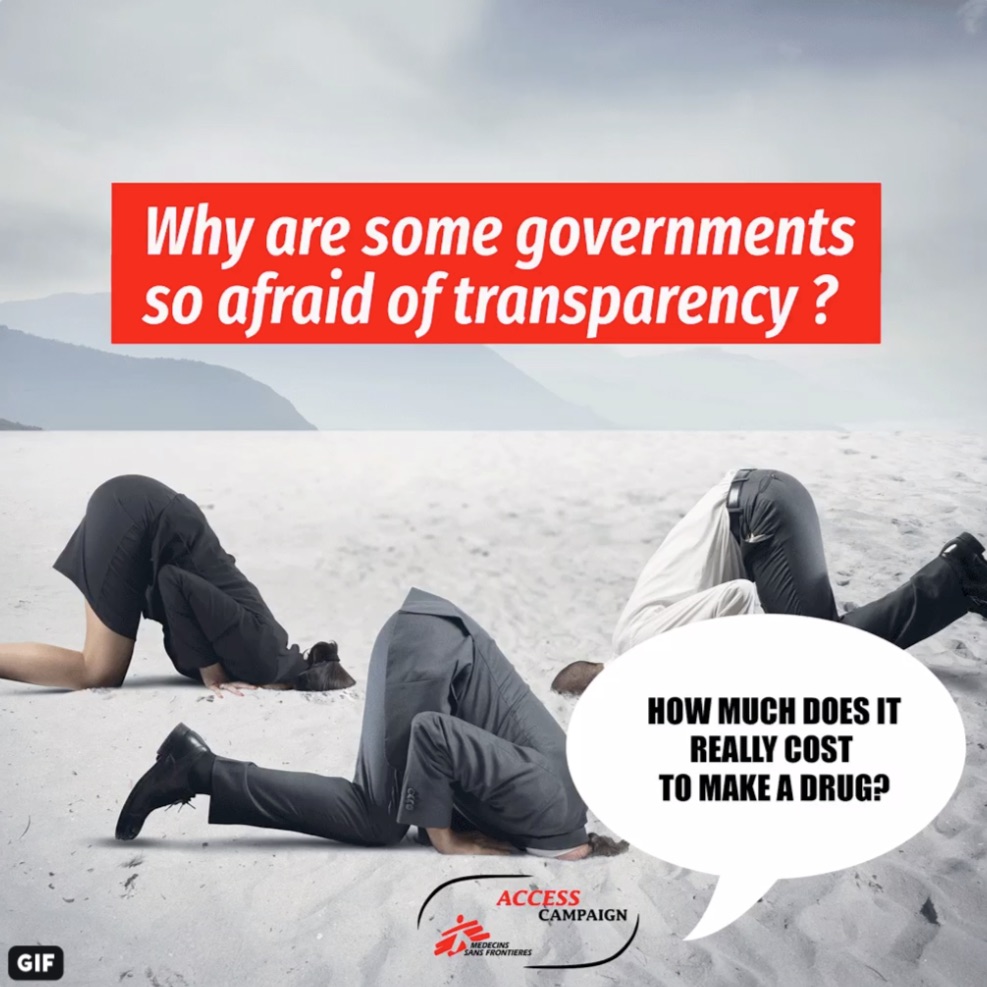 Countries such as Switzerland and Canada, which often play the role of mediators between polarized groups of countries in the WHA, also came in for a pummelling. In one CBC news story, where Love was quoted complaining about Ottawa’s efforts to soften language about R&D disclosure, he said:

“You disappointed us this week, Canada, you guys are supposed to be the good guys, right?”

Even the US Senator and presidential hopeful Bernie Sanders got into the action, saying in a tweet on Friday: “I understand President Trump is blocking a resolution at the @WHO that would require drug companies to disclose actual R&D costs for pharmaceutical drugs. Nobody should believe Mr. Trump when he talks about taking on Big Pharma.”

The international press attention and social media uproar was clearly unsettling to health delegations unaccustomed to having technical debates around WHA resolutions be the focus of close scrutiny and aggressive tweeting.

“It doesn’t help advance a solution,” said one European representative.

Another delegate from Zimbabwe said that members of the drafting group had been asked to clamp down on their public discussion of the text, which could even foul the waters of an agreement.

Other delegates voiced concerns that they had lacked sufficient time to review the nuances of the resolution, which was only floated by lead sponsor Italy in February, prior to being formally tabled in April, and then revised later in May.

That broke with the usual precedent, whereby resolutions are typically reviewed first by the WHO Executive Board at their regular meeting in January, prior to being aired at the World Health Assembly.

Yet despite the brouhaha, the resolution was clearly gaining support. Over the weekend, other Asian and African heavyweights such as India, Sri Lanka, Kenya and Uganda joined as co-sponsors, as well as Eswatini (formerly Swaziland) and European countries the Russian Federation, Andorra, and Luxembourg.

The move by Kenya, Uganda and Eswatini to join with South Africa was significant, one delegate from another East African country noted. “Particularly on issues like this one, we have to vote as a bloc to make our voices heard.”