A new Lancet Commission report calls for health policy leaders to agree upon an ambitious global plan to eradicate of malaria by 2050  – contrasting with a World Health Organization report released in August that concluded it was too early to set a target date for eradication.

The report Malaria eradication within a generation: ambitious, achievable, and necessary  sets out a detailed roadmap for achieving eradication in the next three decades. Authored by a group of 41 leading malariologists, economists, health policy experts, and biomedical scientists, the report concludes that eradication is possible with the right tools, political commitments – and another $2 billion annually in funding.

“For too long, malaria eradication has been a distant dream, but now we have evidence that malaria can and should be eradicated by 2050,” said Sir Richard Feachem, co-chair of The Lancet Commission on Malaria Eradication and director of the Global Health Group at the University of California, San Francisco (UCSF).

However, in an op-ed that appeared alongside the Commission’s massive report, WHO’s Director General, Dr Tedros Adhanom Gheyebresus, cautioned that malaria could “not be eradicated within this timeframe” with the currently available tools and strategies.

WHO & Lancet Commission Differ on Feasibility of Eradication by 2050

In August, WHO’s Strategic Advisory Group on Malaria Eradication (SAGEme) issued a much more sobering assessment of trends. The WHO experts cautioned that the world was not even “on track to meet global targets for 2020.” And progress made in reducing malaria cases and malaria deaths has stagnated in recent years, with no change in malaria incidence or case-fatality since 2015.

SAGEme concluded that under even with the most optimistic scenarios, in 2050 there would still be 11 million malaria cases annually in malaria’s epicenter, Africa. The WHO report also comes against the history of a failed 14-year global WHO campaign to eradicate malaria in the 1950’s, which observers say has made the agency reluctant to set such an ambitious goal again, unless it is really attainable.

“A malaria-free world, which has been WHO’s vision since at least 1955, remains the ultimate goal of the global health community,” Dr. Pedro Alonso, director of WHO’s Global Malaria Programme told Health Policy Watch. “We have a global strategy, endorsed by the World Health Assembly in 2015, that gets the world 90% of the way to eradication.”

“No one yet knows what it will take to get the final 10% of malaria, or when we will be able to finish the job, but we know what needs to be done today,” Alonso said. But to make the “ultimate push” for eradication, he underlined that the world first needs to get “back on track” to meet the 2020 global goals for malaria. Countries need to embrace Universal Health Coverage, “to deliver malaria interventions to everyone who needs them,” he added.  And new R&D tools as well as more resources for health systems will also be critical.

“The global malaria community has clearly united around the vision of a world free of malaria and now we need to move forward to make it happen,” he concluded at the close of the Geneva Forum.

Meanwhile, David Reddy, Chief Executive Officer of the Geneva-based Medicines for Malaria Venture (MMV), applauded the focus that the recent reports by WHO as well as the Lancet Commission report had brought to the malaria issue – which could also help reinvigorate global commitments.

“With more than 400,000 people dying each year from this preventable and curable disease, these analyses will help to refocus and strengthen our efforts toward eradication,” said Reddy. “It is appropriate that these two comprehensive analyses support the view that malaria eradication is achievable and identify concrete measures to regain momentum toward a malaria-free world.”

He added that MMV was supporting research to develop tools that will support “the ultimate eradication of malaria” while also expanding its focus on access and product management to address key unmet needs, noting that “unless the important new tools we have co-developed can be readily available wherever and whenever they are needed, we will have fallen short on fulfilling the promise of our mission”.

Both the WHO SAGEme and Lancet Commission looked at the same social, environmental, and economic trends to assess the feasibility of malaria eradication, but came to different conclusions.

While committed to the idea of malaria eradication since 1948, WHO has been cautious about setting a target date. WHO claims that “optimal tools” have not yet been developed and the current burden of malaria cases is still too high to target eradication.  Successes in smallpox and polio eradication hinged on the low number of annual cases, and the availability of highly efficacious vaccines, points out a WHO Q&A.

Dr. Tedros, in his Op-Ed arguing that the “imperfect application of imperfect tools” has reduced the malaria burden, but has not been enough to push forward to malaria eradication.

As a result, the WHO SAGEme report concludes that setting a target with too many uncertainties “may actually be counterproductive.” It urges a more cautious approach that will assess the progress against malaria in five-year intervals, until a “tipping point” is reached where a time-limited malaria eradication campaign is fully feasible.

On the other hand, the Lancet Commission argues that the target date should be set for 2050, believing that the goal is “a bold but attainable, and necessary one.”

While acknowledging that there are outstanding challenges to malaria eradication, the Commission’s report also is more optimistic about the R&D pipeline, calling it “robust” and noting that new tools are expected to be rolled out in the next decade.

Additionally, the report points to a ripe political climate for setting a target for eradication, noting many high-burden countries have increased malaria financing in the past decade.

Finally, the Commission’s report notes that in the absence of full-fledged of eradication, massive efforts would in fact be needed to sustain malaria elimination. For instance, malaria has already been eliminated in a number of countries, such as the United States. However, states must continue surveillance and control efforts to prevent malaria from being imported from other endemic countries.

Currently, global WHO targets sidestep the issue of eradication, and encourage regions to target malaria elimination “where it is feasible to do so,” meaning in countries with low burden of malaria. 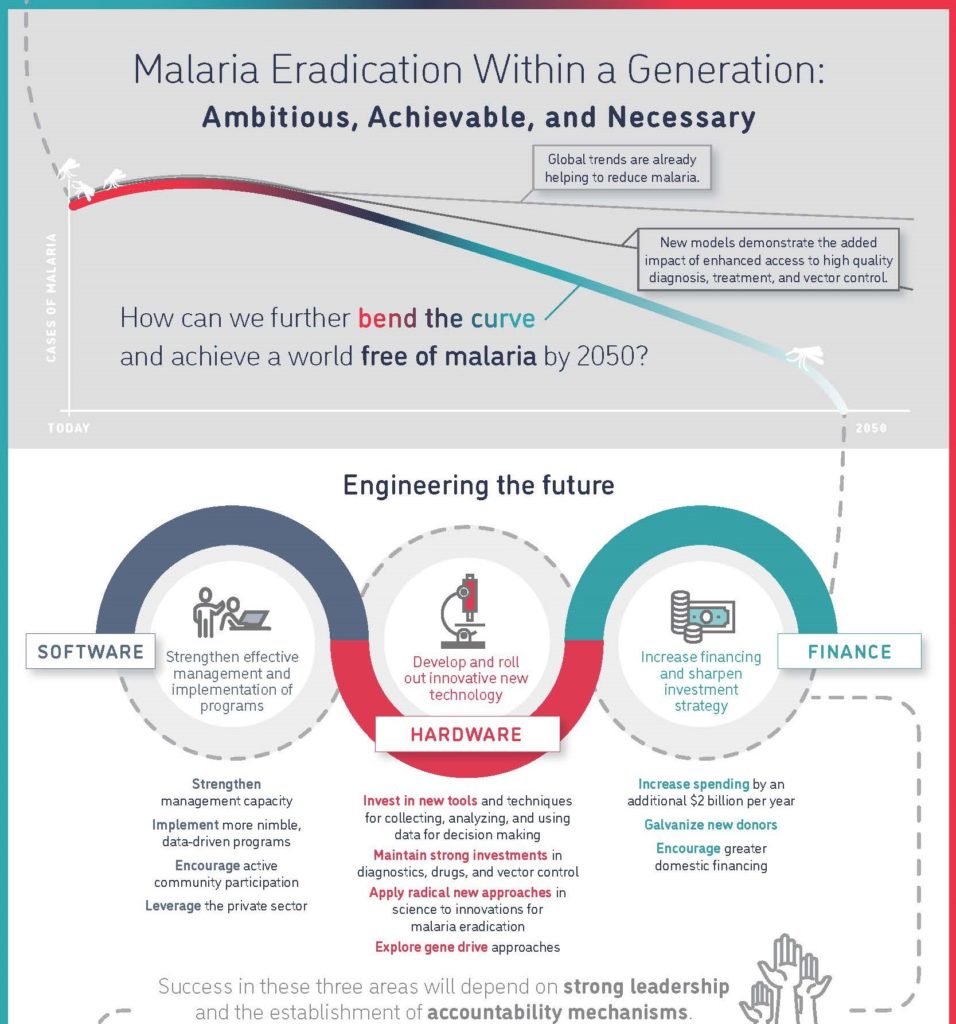 The Lancet Commission report, launched at a WHO-hosted Geneva Forum on Rising to the Challenge of Malaria Eradication this week, sounds a much bolder note, claiming that global eradication is possible by 2050 – providing there was sufficient political and research community leadership, finance, and country commitment.

The Commission also underlines that it is critical now to accelerate efforts for malaria eradication, to end “the never-ending struggle” against increasing drug and insecticide resistance, which could even lead to malaria resurgence, associated with more human, social and economic costs.

While malaria eradication by 2050 is feasible, this hinges on aggressive action in three major areas, described by the Commission as:

Human trials for the first malaria vaccine are underway in Malawi, and studies are being conducted to evaluate mass drug administration (MDA) as a new strategy for malaria elimination.

While noting the impressive scale-up in malaria funding over the previous two decades, the Commission calls for funders to mobilize an additional USD$2 billion annually in order to reach eradication, calling for domestic governments to take on 75% of the additional costs. Currently, global expenditure for malaria stands at about USD$4.3 billion annually.

The benefits, the Commission argues, outweigh the costs of investing in malaria eradication. Reducing the malaria burden by 90% by 2030 in the highest burden countries alone is estimated to yield over USD$280 billion in economic gains.

Once malaria is eradicated, it will no longer cripple economies, allow resources to be diverted to other health priorities, and contribute to individuals’ improved quality of life. More precise WHO estimates of the economic benefits of malaria control will also be published as part of a SAGEme report later this year.

History of Malaria Eradication Efforts Extend Back to 1950s

The WHO launched the first Global Malaria Eradication Programme (GMEP) in 1955.

The first GMEP made huge strides against malaria, contributing successful elimination in the United States and some South American countries.

The first GMEP also excluded Africa, the continent with the highest malaria burden in the world. After a 14-year battle, experts at the WHO agreed to post-pone the target date for malaria eradication until “conditions were more favorable.”

However, over 400,000 people still die from malaria annually. In high-burden countries such as Ethiopia, malaria remains a leading cause of maternal mortality and death in young children.

Malaria is a biologically feasible target for eradication because humans are largely the only mammalian host.