Loss of biodiversity around the world is happening at an unprecedented rate, damaging ecosystems and threatening grave impacts to human well-being, a new landmark report warns. But it’s not too late to make a difference, it says, through transformative, system-wide change across technological, economic and social factors.

The report found that today around 1 million animal and plant species are threatened with extinction – more than ever before in human history – due to human drivers of change in nature that are stretching humanity’s ecological “safety net” to its limit.

It notes that the transformative change required to reverse these trends will likely draw strong opposition from groups with vested interests in the status quo, which it says must be overcome for the public good.

The Global Assessment Report, released yesterday by the Intergovernmental Science-Policy Platform on Biodiversity and Ecosystem Services (IPBES), an intergovernmental body comprised of more than 130 member governments, is the most comprehensive report of its kind on the human factors driving global biodiversity loss.

The report “assesses changes over the past five decades, providing a comprehensive picture of the relationship between economic development pathways and their impacts on nature,” and “offers a range of possible scenarios for the coming decades,” IPBES said in a press release.

“The health of ecosystems on which we and all other species depend is deteriorating more rapidly than ever,” Sir Robert Watson, chair of IPBES, said in the release. “We are eroding the very foundations of our economies, livelihoods, food security, health and quality of life worldwide.”

“Through ‘transformative change’, nature can still be conserved, restored and used sustainably – this is also key to meeting most other global goals,” he said. “By transformative change, we mean a fundamental, system-wide reorganization across technological, economic and social factors, including paradigms, goals and values.”

Despite progress made by global efforts for conservation and sustainability, the report found that the trajectories of these efforts will not be sufficient to reach global targets by 2030.

Based on current trends, it says, progress will be undermined towards achieving 80 percent of the Sustainable Development Goals (SDGs) by 2030. This includes targets related to poverty, hunger, health, water, cities, climate, oceans and land.

Achieving the SDGs and more, the report underlines, will only be possible through transformative change across economic, social, political and technological factors.

“Loss of biodiversity is therefore shown to be not only an environmental issue, but also a developmental, economic, security, social and moral issue as well,” IPBES noted in the release.

“Biodiversity and nature’s contributions to people are our common heritage and humanity’s most important life-supporting ‘safety net’. But our safety net is stretched almost to breaking point,” Sandra Díaz, co-chair the Assessment along with Josef Settele and Eduardo S. Brondízio, said in the release.

To increase the policy relevance of the report, its authors ranked the five most direct and impactful human drivers of change in nature: (1) changes in land and sea use; (2) direct exploitation of organisms; (3) climate change; (4) pollution and (5) invasive alien species.

The report notes that greenhouse gas emissions have doubled since 1980, and that the impact of climate change is “expected to increase over the coming decades, in some cases surpassing the impact of land and sea use change and other drivers,” according to the release.

“IPBES presents the authoritative science, knowledge and the policy options to decision makers for their consideration,” Dr. Anne Larigauderie IPBES Executive Secretary, said in the release, highlighting the urgency of addressing biodiversity loss, which she described as “a truly global and generational threat to human well-being.”

The IPBES plenary met last week from 29 April to 4 May in Paris, where they approved the report.

Figure 1 from the report below details “[g]lobal trends in the capacity of nature to sustain contributions to good quality of life from 1970 to the present, which show a decline for 14 of the 18 categories of nature’s contributions to people analyzed.” 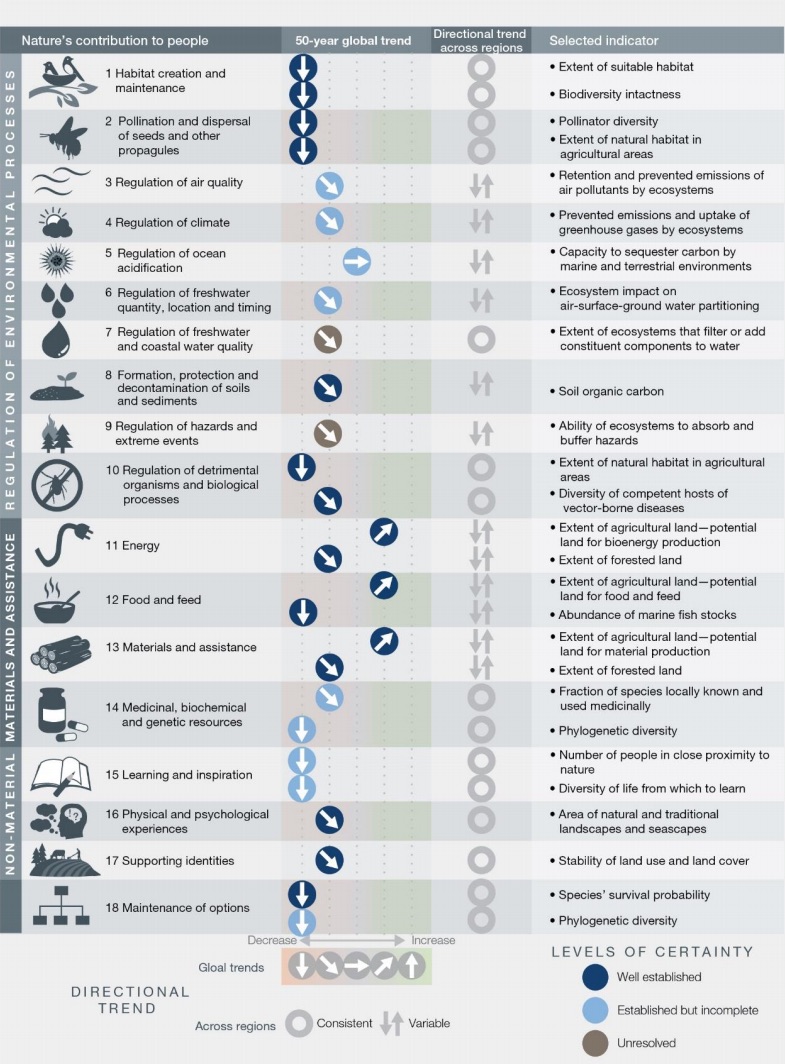