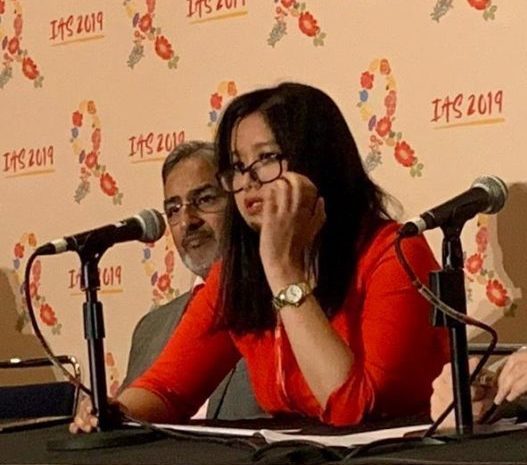 Fifa Rahman, Unitaid NGO Delegation board member and PhD Candidate at the University of Leeds, moderated a panel at the recent IAS Conference on HIV Science in Mexico entitled “How To Fix Our Medical R&D Model: A Spotlight On TB Treatment.” The panel featured speakers from Médecins Sans Frontières’ (MSF/Doctors Without Borders) Access Campaign, Drugs for Neglected Diseases initiative, Treatment Action Campaign, Treatment Action Group, The International Union Against Tuberculosis and Lung Disease (The Union), and the Mexican National Institute of Health Sciences and Nutrition (National Institute Salvador Zubirán). Here, Rahman shares highlights from the panel on why the medical research and development (R&D) model needs to be ‘fixed’, as well as ways to go about fixing it, including greater transparency, new incentives for investment in R&D that are alternatives to intellectual property, and increased NGO and community participation throughout the research and development process.

Health Policy Watch: At the IAS Conference on HIV Science in July, you moderated a panel on how to fix the medical R&D model, with a focus on tuberculosis (TB). Can you describe some of the key themes discussed during the panel regarding what needs to be ‘fixed’ about the medical R&D model? What were some of the specific strategies or solutions presented to go about doing this?

​Fifa Rahman: The profit-driven medical R&D model means that so-called ‘poor nation’ diseases like tuberculosis are underfunded. And while there are 7 antibiotics for TB in the R&D pipeline, this is insufficient to address the sheer burden of the disease that we have today. In discussion of this broken R&D model, several themes emerged – notably the need for details on public funding into research of drugs to be made public and transparent; that other forms of delinkage to separate R&D costs from product prices, such as prizes for developing new antibiotics, be funded; and that companies license their drugs, including to the Medicines Patent Pool (MPP).

Paula Fujiwara from The Union spoke about the Life Prize, which is aimed towards delivering an affordable, short-course treatment regimen that is effective against all forms of tuberculosis. How this would work is that donors would put their monies into a prize fund, and this prize funding (pegged at US$ 30 million) would be given to companies producing drugs that enter clinical trials to develop a pan-TB regimen, and that also fulfil all predefined criteria, such as addressing stewardship concerns and licensing to ensure access. This plan is guided by principles of access and affordability, and removes the drug development process out of the faulty profit-driven system. It’s a brilliant idea – but needs political commitment from donor countries.

Sharonann Lynch from MSF Access was supportive of the Life Prize idea, and additionally spoke about the need to regulate the margin of income over the cost of manufacturing, and that countries needed to commit to transparency of the cost of R&D to make this work.

HPW: The need for public health-driven R&D has been a major theme this year, with intense debate over how best to achieve this in multiple United Nations fora, including the World Health Organization, the Human Rights Council and more recently the General Assembly in negotiating the political declaration on universal health coverage (UHC). Do you see progress taking place nationally and internationally in advancing public health-driven R&D, and if so how? If not, why not?

FR: It’s hard to say. On one hand you’ve got developed and developing nations, including Italy, Malaysia, Spain, Brazil, an entire African bloc of nations, and the United States, endorsing a World Health Assembly (WHA) resolution on drug pricing and research and development transparency, which is clearly a major milestone. We’ve also got increased visibility on drug pricing debates. High drug prices are no longer a developing country issue, with buyers clubs being established on the cystic fibrosis drug Orkambi in the UK, and people dying due to substitution of originator insulin in the United States. We also have some of Switzerland’s top university hospitals teaming up to tackle high CAR-T cancer therapy prices and offer them at a third of the cost.

On the other hand you’ve got the United Kingdom intensely resisting drug pricing transparency at the WHA, and uncertainty around Democratic Presidential Candidates in the United States, and how the election will go in 2020. Despite the diminishing global dominance of the U.S. for some time now due to the rise of emerging market nations, and of course China, the impact of United States’ regime-making capacity will be greatly dependent on who wins in 2020. For example, a Joe Biden presidency would be vastly different to an Elizabeth Warren presidency in terms of how the U.S. would advance public health-driven R&D internationally.

HPW: Intellectual property (IP) and patents are widely seen to be core drivers that incentivise R&D of new health products, and in this light are viewed by a range of actors as essential for innovation in public health, even while they can lead to monopolies that restrict affordable access to health products. What is your perspective on the role of intellectual property and patents in public health-driven R&D, and can you describe some of the challenges they pose, particularly when negotiated as just one aspect of much more comprehensive trade agreements?

FR: It’s no secret that there is a lot of patent abuse, over-patenting, and evergreening, and as a result patients are deprived of access to medicines which should now be off-patent. The system also encourages price gouging of which we’ve seen numerous examples, but which is particularly visible with stories like that of Tobeka Daki who died of breast cancer not having access to Herceptin.

Trade-related IP binds IP to enforceable regimes, and requires countries to increase intellectual property protection which enables price gouging and evergreening as described. But there are signs of hope. You see, trade-related IP responds to pharmaceutical markets, and as we move towards more biologic medicines and personalised medicines, the IP regime will respond accordingly. Over the past few years as we saw blockbuster drug lists increasingly dominated by biologic drugs, we saw the United States demanding specific intellectual property provisions for biologic drugs in the Trans-Pacific Partnership (TPP) and the United States-Mexico-Canada Agreement (USMCA). In the former, and as will be shown in upcoming research in my PhD, despite economic interdependence on the United States, countries including Australia, Malaysia and Chile formed strong coalitions based on common ideation rejecting intellectual property maximisation on biologics. So while trade-related IP responds to trends in the market, whether or not countries accept them is dependent on other political economy factors – including their economic interdependence on other large powers, the visibility and emphasis of drug pricing debates in developed nations, and the ability of developing nations to effectively utilise tools that can increase their bargaining power in trade negotiations.

HPW: You’re currently serving as a board member of Unitaid on behalf of the NGO delegation. Can you explain why Unitaid, a major global funder of public health-driven R&D, includes an NGO representative as well as a Community representative in its Executive Board? Do you think the medical R&D system can do better at including NGOs and affected communities in its R&D process, and if so how? Do you think this may also help to fix the medical R&D model?

As the Board Member for the NGO Delegation I can speak on its behalf but not the Communities, and I can say that the NGO Delegation draws upon expert opinion from over 200 NGOs across the world, including input on whether there are already suitable generics for a proposed investment; whether there is proper waste disposal for plastic canisters from malaria indoor spraying; whether the underinvestment in TB is best served by projects on digital adherence technologies; or whether we would be better placed investing in something like the Life Prize or investing in fixing broken paediatric pharmaceutical procurement systems. We also frequently engage with Unitaid grantees – which I think increases the robustness of our feedback to the Board and Secretariat. Alongside the role of the Communities and NGO Board Members, we always hope and expect that the other Board Members, and especially the Secretariat, also find ways to consult directly with NGOs and affected communities to sharpen their approach to ensuring affordable medicines and diagnostics.

We as a Delegation think that NGOs should be consulted more upstream in the R&D process, precisely because of our insight into access, affordability, and equitability issues, as well as to ensure that new medicines and diagnostics are designed in a manner that is best suited to use in particular settings, or to ensure that such products are acceptable to the people who must ultimately use them.

As to the question on ‘how?’ – there are a few approaches. One promising avenue is to ensure prominent NGO and community participation at the WHO as it continues to update and expand the Health Product Profile Directory, which was launched by TDR, WHO’s Special Programme for Research and Training in Tropical Diseases, earlier this year. It is also important that major public funders of R&D, whether in the U.S., Europe or elsewhere, find ways to consult and work directly with NGOs and communities – especially since so many of the crucial inventions that are ultimately brought to the market are brought forward by intramural or extramural research hosted by these institutions. Finally, major philanthropic funders such as the Wellcome Trust and the Gates Foundation, and many of their key recipients, and in particular product development partnerships, can play a crucial role in ensuring the participation of communities and NGOs both upstream and also as products enter the market, where their contributions are equally needed.

Such interventions can help to ensure that medical R&D, as far as initial investments made in the public sector and philanthropies, are more attuned to the needs of communities at the outset. Yet the breakdown of the R&D model requires much deeper changes to how R&D is conducted, including a need to search for incentives outside of intellectual property; the importance of public health funders demanding a public return on public investment; a need to promote transparency across the R&D process; and much more substantial political will of governments to both balance the power of pharmaceutical companies and to bring down prices of new medicines and vaccines when these other interventions fail to ensure affordability of new medicines.

Fifa Rahman is the Board Member for NGOs at Unitaid, working on good governance, timeliness of investments, and procurement transparency, among other things. She was formerly the head of policy at the Malaysian AIDS Council, and worked on a HCV compulsory licence. She is now based in the United Kingdom working on a PhD on trade negotiator tactics in intellectual property negotiations at the University of Leeds.