Between 2000 and 2016, global health spending grew at 6 percent per year, faster than the 4 percent average annual growth in global GDP. But huge inequalities persist that prevent millions of people from getting the care they need, according to a new World Health Organization report issued today, the first official United Nations-sponsored Universal Health Coverage Day. 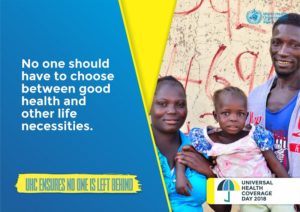 The report Public Spending on Health: A Closer Look at Global Trends reveals that in low-income countries the average share of GDP spent on health in 2016 was actually lower than it had been in 2000. Meanwhile, external, aid per capita, had more than doubled across low income countries, the report states. The data highlights the need for stronger domestic commitments to public health coverage in countries where needs are the often greatest.

“The world now spends US 7.5 trillion on health, close to 10 % of global GDP. Due to technological and demographic changes, the health sector is growing as a share of the global economy,” tweeted Agnes Soucat (@asoucat), director of Health Systems, Governance, and Financing at WHO.

Even so, the share of domestic health spending in low income countries declined from around 7.9 percent to 6.8 percent of GDP on average between 2000 and 2016, while aid increased from US$4 to US$10, per capita, the report finds.

The report also assesses, for the first time, spending on primary health care in relation to specific diseases, as well as the relationship between spending and service coverage.

The report concludes that domestic spending on health is central to universal health coverage, but there is no clear trend of increased government prioritization of health spending.

From Asia to the Americas, UN agencies and civil society groups celebrated the new UN day, staging marches and with WHO and other UN agencies the day, staging nearly 200 events worldwide. They ranged from public marches in Nigeria to a two-day conference in New Delhi, of the Partners’ Forum of the Partnership for Maternal, Newborn & Child Health, with Indian Prime Minister Narendra Modi and Michelle Bachelet, former President of Chile, giving keynote addresses.

Link to WHO video on Universal Health Coverage https://youtu.be/EIMh2i_lBWQ