Health is becoming more prominent in the climate debate in light of the mounting human toll from extreme weather – and that’s only the tip of the ’iceberg’, in terms of what lies in store, says Daniel Kass, senior vice president at Vital Strategies and former Deputy Commissioner of Health for New York City. But health alone is not enough to move the political needle. As the world leaders gather Monday for the UN Climate Summit, to face what UN Secretary General António Guterres, has described as the “Battle of our Lives”, health advocates need to band together with other constituencies in a united front. Kass talked with Health Policy Watch about the issues at stake in the lead-up to Monday’s Summit.

Health Policy Watch:  What do you expect to be the main health-related aspects of climate change that will be discussed at the UN Climate Summit?

Daniel Kass: The evidence about the health impacts is growing, and that will help to focus attention on health at the meeting. It is always easiest to discuss the direct effects of climate change – in particular, weather-related mortality and illness, for example heat stroke and heat-related mortality, coastal flooding and drowning.

But more emphasis needs to be placed on the indirect impacts, and rightfully so, as they are far greater, and more far-reaching. These include impacts that are already with us – heart disease, respiratory disease and deaths from global increases in air pollution; deaths from resurgent vector-borne diseases like malaria as well as from novel vector-borne infections like Zika virus, which tend to spread more widely to human settlements as a result of deforestation, urbanization and related habitat changes.

Still, with the rapid pace of change, there needs to be more discussion about still more indirect impacts. This would include consideration of issues such as:  catastrophic outcomes including malnutrition from disruptions in food supplies; health impacts of water stress/shortages and indirect impacts from increases in water-related conflict and migration; and the potential for social safety net collapse as more resources are diverted to coping with climate-related mitigation.

HP Watch: This is a formidable list.  What are the main challenges to addressing it more effectively?

DK: The current breakdown in global economic and political cooperation is a huge impediment to progress. It is extremely difficult to manage more sustainable production of energy; standards for industrial processes and global commodities like vehicles; and harmonized trade rules and manufacturing standards necessary to address climate-related emissions. Progress depends on finding common ground based upon mutual self-interest. Perhaps the catastrophic threats from climate change will unify the world. But rising nationalism and the political marketing of self-interest does not make me hopeful, in the near term.

HP Watch:  The recent IPCC report also highlighted threats to food security, including the need to reduce meat consumption to ensure a sustainable food supply for a growing population. Do you see this as broadening the health agenda? And what are the concrete implications for the health sector? After all, a recent WHO nutrition report ignored warnings of health risks associated with red meat consumption, including from its own cancer researchers.[1]

DK: Carbon emissions reductions from greater reliance on renewable energy will have enormous health and economic co-benefits. So too will shifts in land use, in particular from reducing the impact of meat production— mammalian in particular.

Diets lower in meat and higher in variety and with greater caloric and nutritional needs met by grains, fruits, and vegetables, bring health benefits at individual and population levels. Remember, as well, that most of the world already lives without ready access to meat – especially beef. While it’s important for health advocates to join the call for more rational and less carbon-intensive food production, it is also important that as population and net global wealth grows, this does not come with a proportional increase in meat consumption. The challenges for nutritionists, agronomists and others are different while they work toward the same aims.

Climate advocates in the West should not get caught in the trap that may be set by proponents of the status quo. Industry wants to frame this as a consumer freedom issue, and sometimes advocates direct their efforts at consumers rather than the corporate and governmental policy actors that bear primary responsibility for reversing trends in CO2 emissions. That’s just what the food, fossil fuel and land oligarchs want to happen.

HP Watch:  Reducing climate emissions from fossil fuel sources, which also cause health harmful air pollution, means scaling back industries such as coal, automobiles, etc., which are lobbying hard to maintain their economic foothold, and even expand in low- and middle-income countries. What forms of political action and policy measures will be necessary to ensure change? 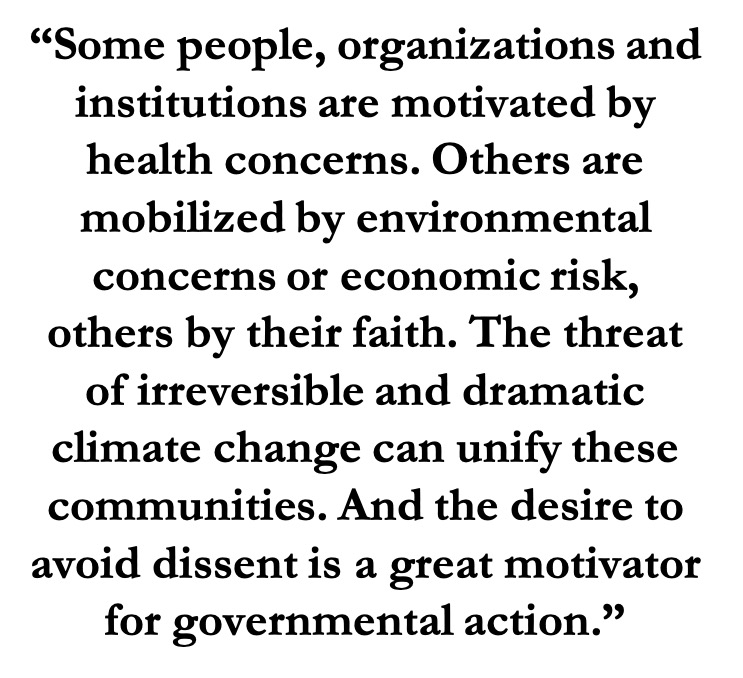 DK: All of the work that must be done is ultimately political. There is greater public acknowledgement that the status quo cannot be maintained, and there remains no rational economic argument for doing so (once the true health and planetary costs of pollution and climate emissions are accounted for). Broad categories of policies that must be expanded or initiated include:

This will require redirecting development funding toward green industries, and imposing conditions with sanctions for failing to meet goals. The greatest spending must happen where the greatest emissions are, and those countries (middle- and high-income countries) will only do so if there is a strong political movement to demand it. There are very positive signs that this is occurring – enabling health and climate advocates to advance calls for policy change. And people are mobilizing around the difficult issues of societal reorganization. The world’s nations spend nearly USD $2 trillion each year on militaries. Investing in planetary survival has a far greater return on investment than war.

HP Watch: Can you speak to the role of cities in reducing climate change and its related health impacts? And do you see the Climate Summit as a key event in planning and preparing for such changes?

DK: There is good reason to think cities will be central to the Summit, and central to potential solutions. The challenges are profound: The world is increasingly urbanized, and this trend is projected to continue. Cities suffer a commensurate global health and economic burden from climate change and air pollution, and a large proportion of urban populations are extremely vulnerable to climate change, loss of habitable area from rising sea levels, drought and flooding, all made worse by the informality of new urban settlements in low-income countries.

Cities can lead the way in mitigation and adaptation, but they typically don’t have the fiscal, political or regulatory authority to do it alone. There is good reason to believe that greater urbanization will ultimately support mitigation. Cities in the industrialized world typically have lower per capita CO2 emissions compared to their suburbs because of their efficiency, density, verticality, and availability of mass transit. Some cities are rethinking the place of automobiles and moving to regulate their own purchase of energy from renewable sources. We need to ensure that we increase knowledge and promote uptake of successful strategies so that more cities follow suit.

HP Watch:  While awareness of the human health impacts of climate change is growing, it still doesn’t seem to be sufficient to drive the kind of dramatic commitments that the SG has in mind.  Will some countries deliver? And if not, what does the world do on the day after the Climate Summit?

DK: I think of health impacts as a necessary but insufficient way to mobilize additional constituencies around the impacts of climate change. Research and modelling show that the burden of death and disease from more extreme weather, population displacement, more widespread and novel infectious and vector-borne diseases, stress, negative birth outcomes (and the list goes on and on) will overwhelm even wealthy countries’ health systems and exhaust governmental resources in lower income countries. And these impacts are already being felt. Some people, organizations and institutions are motivated by health concerns and they need to be mobilized. Others are mobilized by environmental concerns or economic risk, others by their faith. The threat of irreversible and dramatic climate change can unify these communities. And the desire to avoid dissent is a great motivator for governmental action.

Some countries are already delivering, both in terms of energy transformation and funding to support global work. Others are cynically running in the wrong direction. Local governments, which feel the impacts earliest, are responding globally, but require national and international commitments to make an impact. Following the Climate Summit, the world needs to study the results and ask whether their representatives are serious, whether they are prepared to take rapid action, whether they can be counted on. If the answers are “no,” they should do everything they can to ensure that their term in office is short-lived.

Note: Kass is senior vice president of environmental health at Vital Strategies, a global health organization that works with governments and civil society in 73 countries to help them make rapid progress against cancer, heart disease, obesity, tobacco use, epidemic diseases, drug overdose, road crashes and other leading causes of disease, injury and death. Previously, Kass was Deputy Commissioner for the Division of Environmental Health Service at the New York City Department of Health and Mental Hygiene.