Berlin, Germany (29 October 2019) – Experts called on policy-makers to put human health and wellbeing at the centre of climate action decisions at the World Health Summit, which entered its third and final day Tuesday.

“There is a need for urgent action to reduce greenhouse emissions to protect health, because we have less than 30 years of emissions left to have a reasonable chance of keeping to a 2 degrees Celsius temperature rise above pre-industrial levels,” said Professor of Environmental Change and Public Health at the London School of Hygiene and Tropical Medicine, Sir Andy Haines.

His presentation during the session, “Climate Change and Public Health: Science Guiding Policy and Practice,” covered a slew of the health impacts of climate change, including those of the wildfires, infectious diseases and increased salinity, but also of the physical and mental health toll of floods, an expected rise in pollen allergies in Europe and the productivity of crops— among others.

Tuesday, the third day of the World Health Summit, also focused on Universal Health Coverage and The Global Action Plan for Healthy Lives and Well-Being for All, which aims to better align the work of 12 global health agencies to accelerate achievement of the Sustainable Development Goals.

Wildfires around the world cause death, illness and disruptions in people’s lives- wildfires that feed on the hotter, drier weather brought about in certain areas by climate change.

Meanwhile, in Asia, hospitals struggle to accommodate hordes of dengue patients in severe outbreaks, while parts of southern Europe are seeing domestic transmission of this deadly virus for the first time— a virus carried by Aedes mosquitoes, which thrive in changes to rainfall patterns and warmer conditions.

Then, there are the “slow burn” effects of climate change: in Bangladesh, pregnant women living on the coast were found to have unusually high incidences of pre-eclampsia, linked to drinking groundwater with unusually high levels of sodium. Salination of groundwater and soil is linked to rising sea levels, and hypertension and blood pressure are linked to sodium intake.

These are just three examples of risks posed by climate change to human health, said Haines, a drop in the growing ocean of evidence indicating that the healthcare profession has a major stake in decisions on climate change — though the links range from the obvious to the highly complex. 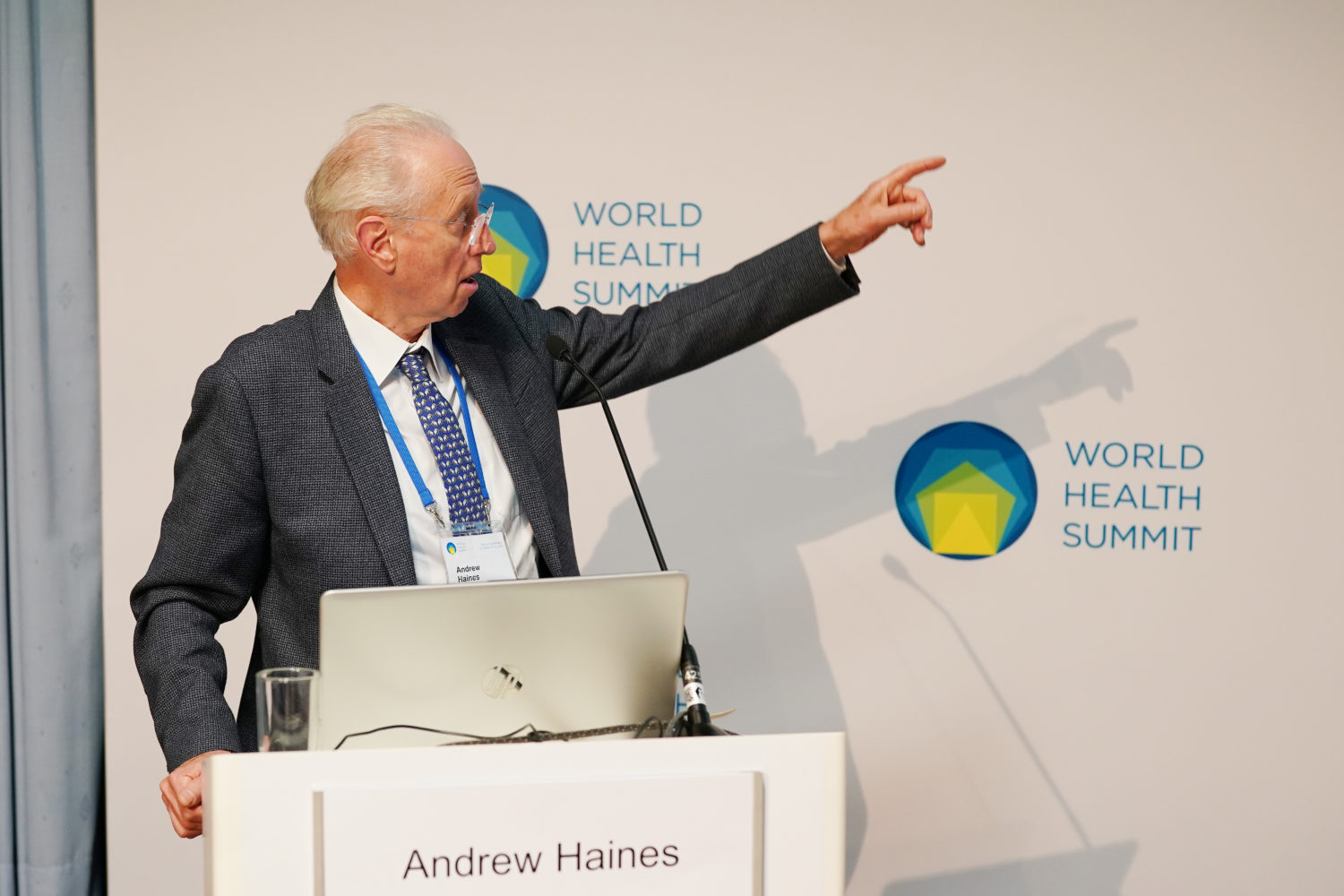 According to Haines, the risks to health posed by climate change include the direct effects of increased exposures to heat and extreme events (e.g., floods or droughts), the effects mediated through ecosystems (such as changes in vector-borne diseases or nutrition) and those mediated through social systems (e.g., conflict or migration).

But it was not all doom and gloom.

For example, he said, the health co-benefits of decarbonising the European economy by phasing out fossil fuels would prevent about 430,000 people per year from dying from air pollution-related health problems in the European Union alone. 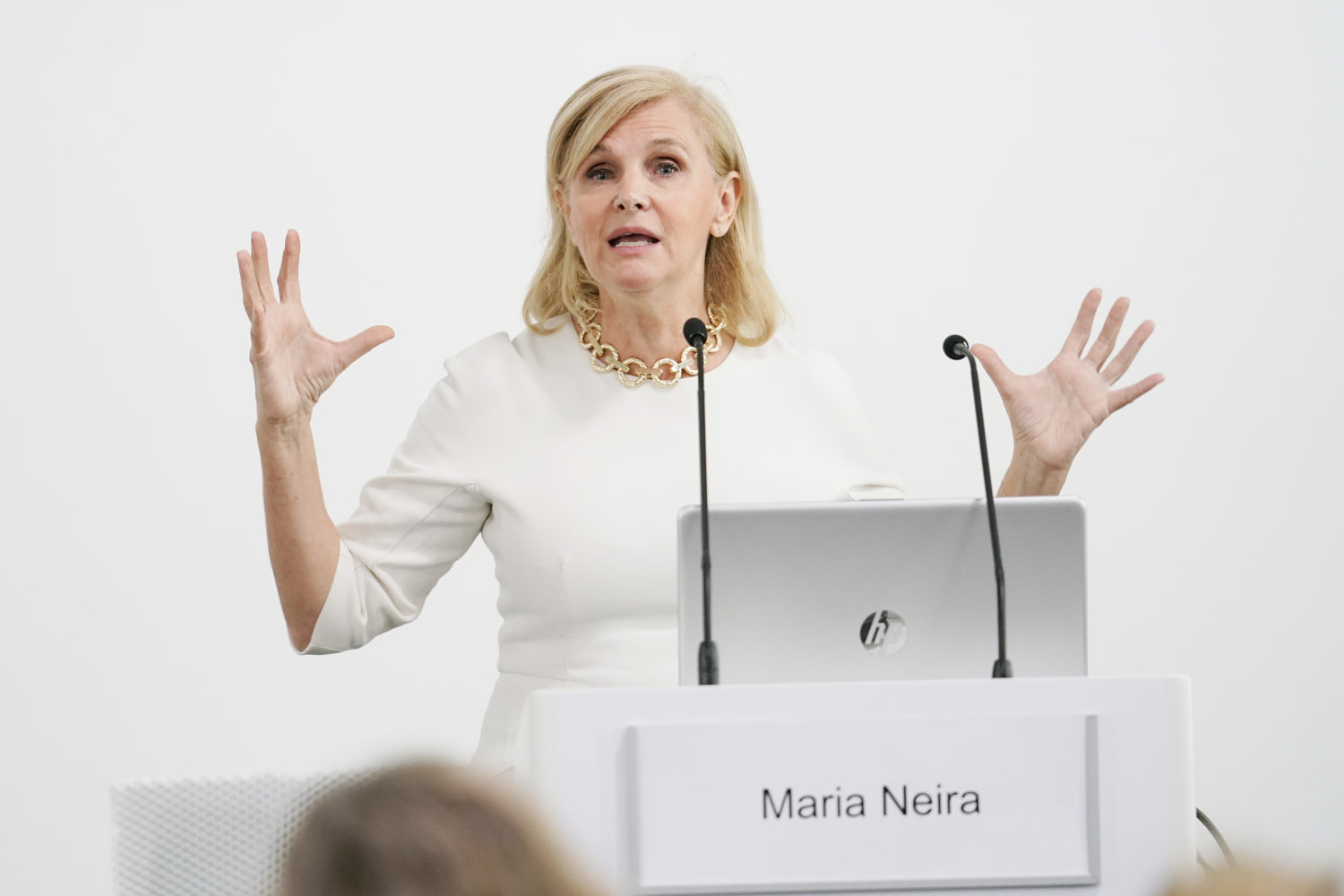 Dr Neira, presenting yesterday on a Roadmap for Climate Action for health, reiterated the point she made at the World Air Quality Conference in London last Wednesday – that putting heath at the centre of decisions would provide the policy coherence and “perfect arguments” needed to motivate people and spur action.

It was also a political argument, she said: “It’s a question of telling our politicians 5 years from now, they will not be able to say ‘I didn’t know’. They are going to court in some places because they are not taking action to reduce their citizens’ exposure to air pollution.”

“There is also the financial argument— the externalities of using coal and fossil fuels are paid by our hospitals and health system,” Dr Neira continued.

As for questions of feasibility of action, Dr Neira was unfazed.

“Well, mayors are doing this. Last week in London, with the Mayor of London committing to endorse WHO Air Quality guidelines along with the C40 and the commitments made at the Climate Action Summit, so it’s feasible,” she said.

She was referring to the C40 network, a group of 94 megacities which had committed to bringing their air quality to safe levels by 2030, among other things by tracking and reporting on the health impacts of their policies.

“It’s a question of putting it on the political agenda as well,” she said.

Dr Neira emphasized that the health community had credibility and needed to use the strong arguments on how climate change was affecting people’s health, as well as the health benefits obtainable from executing the national commitments in the Paris Agreement, which the WHO has previously called “potentially the strongest health agreement of this century.”

An afternoon keynote session explored how politicians can advance health, with speakers including WHO Director-General Tedros Adhanom Ghebreyesus and Brazil’s Minister of Health Luiz Henrique Mandetta.

“Universal health coverage is not a choice a country makes once. It’s a choice that must be made every day, in every policy decision. Disease patterns are always changing, and so are the needs and demands of populations. There are always people at risk of being left behind,” said Dr Tedros, listing antimicrobial resistance, air pollution and climate change as new challenges for countries to confront.

He repeated the call for countries to increase spending on primary health care by 1% GDP by 2030.

Dr Tedros also emphasized the role of global collaboration, noting that, “health is one of the few areas in which international cooperation offers the opportunity for countries to work together for a common cause. Multilateral engagement is not only the smart option, it’s the only option.”

The final session focused on the Global Action Plan for Healthy Lives and Well-Being for All, which aims to better align the work of 12 global health agencies to accelerate achievement of the Sustainable Development Goals.

The plan was introduced at the World Health Summit last year and launched in September at the UN General Assembly. The discussion led by Uganda’s Minister of Health Jane Ruth Aceng, Gavi CEO Seth Berkley, Wellcome Trust Director Jeremy Farrar, and Peter Sands, Executive Director of the Global Fund to Fight AIDS, Tuberculosis and Malaria, reported on progress and plans for the future.

Moderator Ilona Kickbusch, chair of the Geneva Graduate Institute’s Global Health Centre, asked the panelists how the 12 agencies that are signatories to the Global Action Plan can “accelerate” their coordination in a meaningful way, noting that, “if we can work together with countries, that will be for a joint good, but if we don’t, it will be a collective failure,” she noted.

Berkeley said that Gavi had tried to create “purposeful collaboration” with fellow agencies such as the Global Fund in areas such as health system strengthening and digitalizing health records – “it makes sense to work together and that is something that Peter and I have tried to do,” he said.

As another concrete example of better collaboration, Sands noted that the Global Fund had just signed an agreement with the World Bank on a template for how the two agencies would do finance transactions, sharing reporting and audit day in a simplified way. “When you think about sustainability, challenges, being able to do those kind of blended finance transactions is very important.”

On financing, Jane Aceng said that the most important things are strengthening collaboration and transparency, noting that sometimes agencies enter countries and directly offer aid to populations without clarifying to Ministries of Health what resources are being brought into the country. “I want to have [knowledge of all financial resources] aligned into my plan, so at the end of the day… we can ask what did this money do? What has it translated into?”

Aceng said that increased transparency will help ensure accountability from both countries and external agencies, and allow all stakeholders to better allocate resources.

The World Health Summit is one of the world’s premier global health forums. This year, approximately 20 ministers from around the world, the Director-General of the WHO, top scientists, and leaders from the private sector and civil society are among the participants. For three days, over 2,500 participants from 100 countries will discuss ways to improve global health.