Global greenhouse gas (GHG) concentrations have reached record-breaking levels again this year, according to the latest annual report on GHG trends by the World Meteorological Organization (WMO).  Publication of the new data in the WMO’s annual Greenhouse Gas Bulletin, comes just a week ahead of the start of the 25th UNFCCC Climate Conference in Madrid, where nations will huddle once more to try to break the stalemate over action on soaring emissions.

According to the WMO Bulletin globally averaged concentrations of carbon dioxide (CO2) reached 407.8 parts per million in 2018, up from 405.5 parts per million (ppm) in 2017. Levels of two other key greenhouse gases, methane and nitrous oxide, also are at record highs.

“We have again broken records in carbon dioxide concentrations and we have already exceeded 400 ppm level which was regarded as a critical level,” said Taalas, at the press conference. “This carbon dioxide concentration continues and continues, and last year’s increase was about the same as we have been observing in the past 10 years, as an average.” 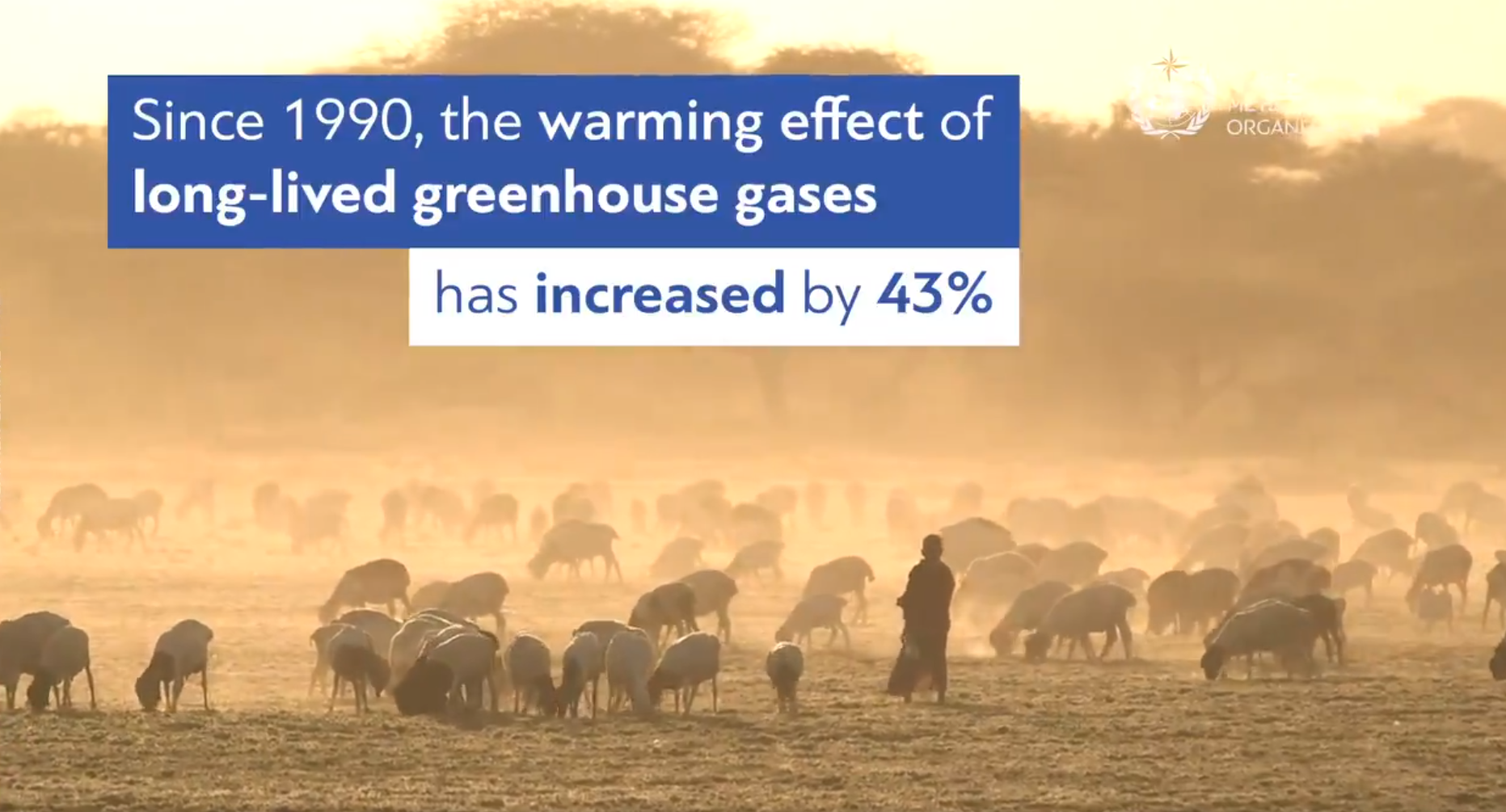 “There is no sign of a slowdown, let alone a decline, in greenhouse gases concentration in the atmosphere despite all the commitments under the Paris Agreement on Climate Change,»  said Taalas in a press release. “We need to translate the commitments into action and increase the level of ambition for the sake of the future welfare of the mankind,” he said.

“It is worth recalling that the last time the Earth experienced a comparable concentration of CO2 was 3-5 million years ago. Back then, the temperature was 2-3°C warmer, sea level was 10-20 meters higher than now,” said Taalas.

Together, the three greenhouse gases, methane, nitrous oxide and CO2, have caused a 43% increase in total radiative forcing since 1990 – which is the scientific measure for climate’s warming effects. 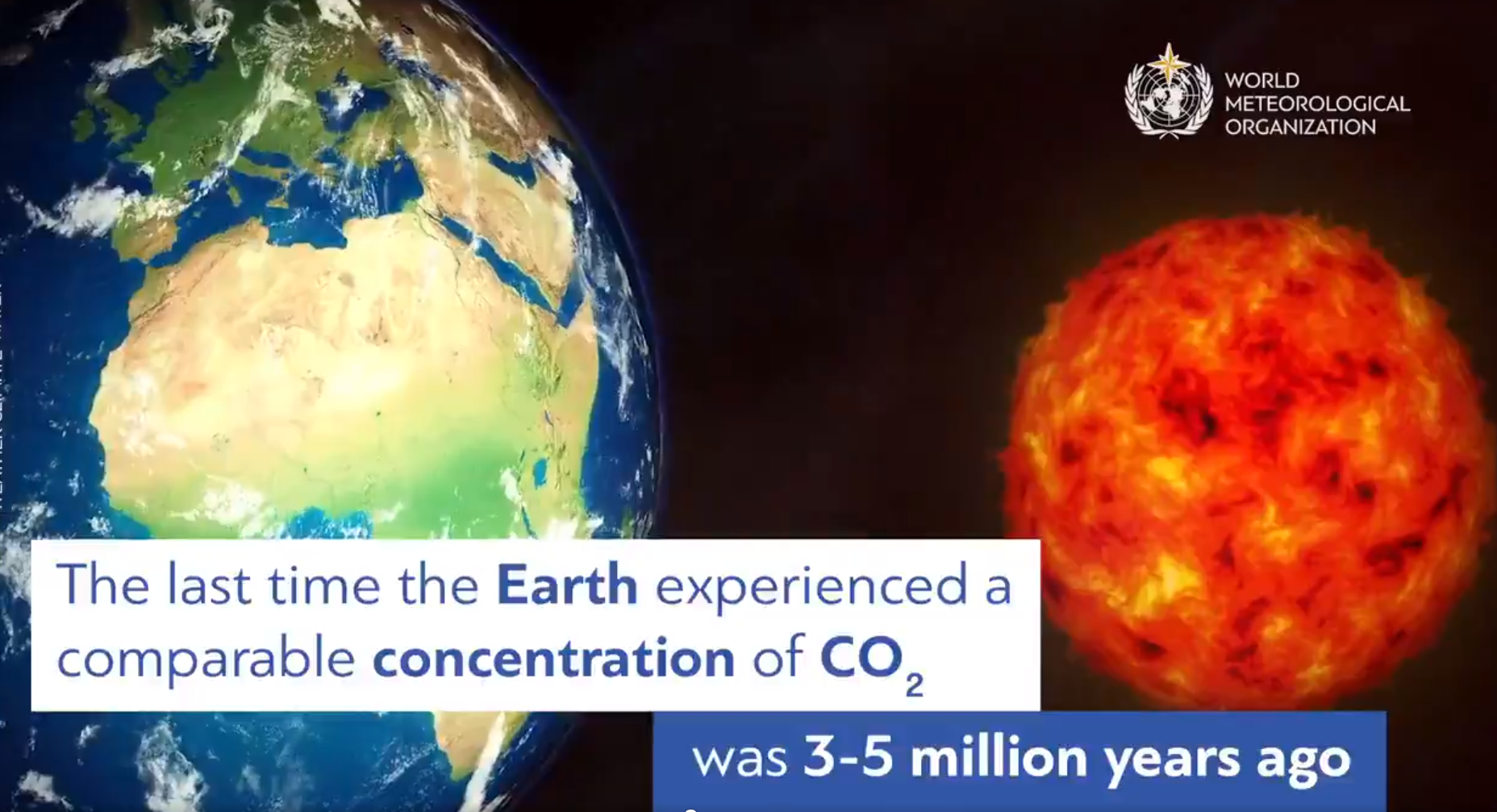 But of the three gases, CO2  is particularly dangerous because it can remain in the atmosphere for hundreds of years.  In comparison, nitrous oxides persists for about a century and methane for about a decade – although per unit of emissions, methane and nitrous oxide have a far more powerful impact on warming.

Concentrations of atmospheric methane (CH4) , responsible for 17 per cent of warming effects, have also been “breaking records”, and 2018 levels reached a new high of 1,869 parts per billion (ppb) in 2018, more than two and a half times the pre-industrial level, Taalas said.

Approximately 40 per cent of methane comes from natural sources, such as wetlands and termites, but 60 per cent comes from human activities, including cattle breeding, rice paddies, mines, landfills and biomass burning. The increase in atmospheric methane between 2017-2018 was also greater than the year before (2016-2017) as well as the average over the last decade, the WMO report notes.

“Nitrous oxide has contributed about 6% of the warming so far”, said Taalas at the press conference. “Again there we have been breaking records, the steady growth of N2O concentration still continues.”  Major sources of nitrous oxide emissions are nitrogen-based agricultural fertilizers, livestock manure, biomass and fossil fuels combustion,  according to the pan-European research consortium ICOS (integrated carbon observation system). And nitrous oxide levels are now higher than at any time in the past 800,000 years.

Based on current trends, global emissions will not even peak by 2030, unless there is a radical turn around in national climate policies among countries worldwide, says WMO.

Countries meeting at Madrid will be re-evaluating their Nationally Determined Contributions (NDCs) to reduce emissions, as well as finance to support lower-income countries to shift to low-carbon technologies. But under the provisions of the 2015 Paris Climate agreement, NDC commitments are purely voluntary, and have so far fallen way short of the commitments needed to halt the rise in atmospheric GHG concentrations, says WMO.

The WMO findings reinforce a slew of recent warnings by the Intergovernmental Panel on Climate Change, other leading scientific bodies, health professionals, and top UN officials, including UN Secretary General António Guterres at September’s UN Climate Summit, that the humanity is on a collision course with nature.

Key to reversing trends with be a more massive shift to renewable energy sources, Taalas emphasized, saying that the world still uses fossil fuels for 85% of its global energy needs, as compared to 15% reliance on nuclear, hydro and renewables.

And while the biggest polluters used to be Europe and North America, China has now become the world’s number one greenhouse gas emitter – along with “fairly strong growth in the emissions of non-OECD countries” too, Taalas added.

This means that both developed and developing economies need to find a common strategy on an issue that was once perceived as the responsibility of rich countries alone.  Said Taalas, “you have to have all of the countries involved.”