Faced by an annual death toll of nearly 13 million people due to environmental risks, the World Health Assembly today approved a first-ever global strategy that sets out a transformative plan for action on Health, environment and climate change.

The risks being addressed include not only air pollution, which kills some 7 million people a year, but also water, sanitation and hygiene risks, which cause some 800,000 preventable deaths annually as well as facilitate the spread of vector-borne diseases, such as malaria, a major childhood killer. Chemical exposures are estimated to kill over one million people a year, according to WHO. 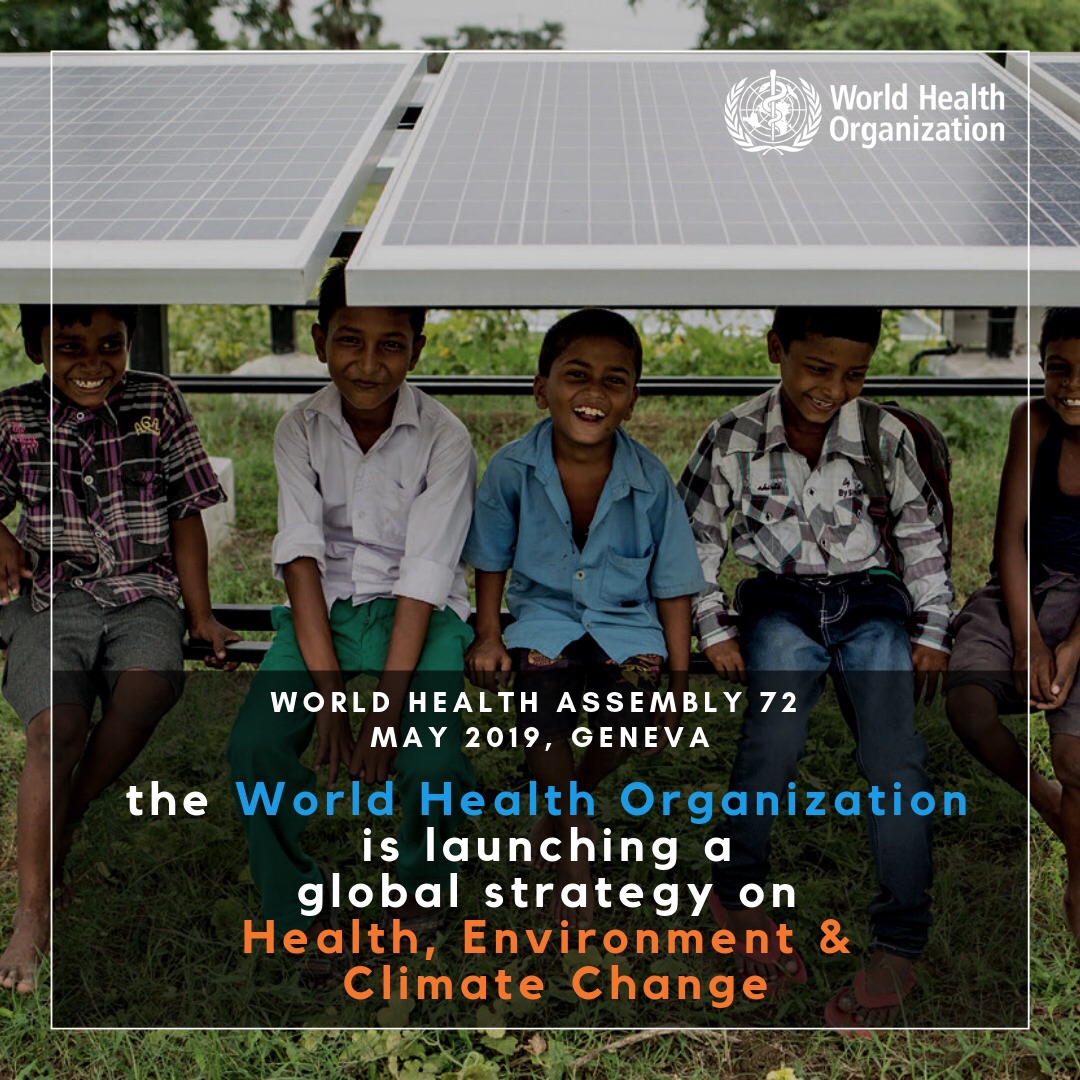 Climate change, meanwhile, poses another set of immediate and longer-term risks, including more heatwaves, droughts, and extreme weather episodes, while modifying the transmission of food-borne, water-borne and zoonotic infectious diseases.

In a related move, The WHA also approved a draft plan of action [pdf] on climate change and health in small island developing states.

In comparison to the approval of an earlier milestone 2015 WHA resolution on air pollution, which was subject to significant debate prior to final approval, delegates on the floor today sounded a note of unity, expressing broad support for the draft WHO global strategy [pdf] on ”health, environment and climate change: the transformation needed to improve lives and well-being sustainably through healthy environment.”

In a tweet from its Geneva Mission, Norway, one of the long-time backers of WHO’s work on air pollution, climate and environmental health, expressed its “strong support” for the new global strategy as well as the plan of action on climate change and health in small island states.

Meanwhile, WHO said in a tweet that it would seek more “ambitious health commitments” from countries to reduce air pollution deaths by two-thirds and slow climate change, in preparation for the UN Secretary General’s Climate Action Summit, planned for September.

National and city governments made 90 such commitments at the First WHO Global Conference on Air Pollution and Health in October 2018, which WHO Director-General Dr Tedros Adhanom Ghebreyesus said would help advance an “aspirational goal” of reducing deaths from air pollution by two-thirds by 2030.

“We are working hard to secure many more ambitious health commitments of this kind at the Secretary-General’s #ClimateAction Summit in September,” WHO said in a tweet.

Comments on the floor during the debate of the resolution reflected the growing global awareness about the multiple ways in which environmental risks of all kinds affect health in multiple dimensions.

Algeria, on behalf of the African Region, expressed concerns over the risks of increased illness from climate change-related phenomenon such as drought and extreme weather, as well as very tangible hazards such as exposure to e-waste and micro-plastics. The delegate called for more collaboration between countries and for innovative financing to clean up pollution.

The United States encouraged the WHO to address air pollution as the fifth risk factor driving the noncommunicable disease epidemic. WHO estimates that air pollution is responsible for one-quarter to one-third of deaths from the leading NCD risks such as heart attack, stroke, respiratory diseases and lung cancers. Other leading risk factors include tobacco use, physical inactivity, the harmful use of alcohol and unhealthy diets, according to WHO.

Thailand remarked on the borderless nature of air pollution and added that adequate air pollution monitoring would guide mitigating measures.

A number of developing countries asked WHO to strengthen support to the health sector to implement the strategy, including capacity building, technology transfer, and awareness-raising.

As a dissonant voice, although not opposing the strategy, Brazil said some terminology in the resolution text, such as “circular economy, common good, and green economy”, require further clarification as they currently lack internationally agreed-upon definitions.

The WHO is expected to report back on progress in the implementation of the global strategy in two years, to the 74th WHA.