NEW YORK CITY – Globally, governments are spending nearly $US 300 billion in price supports and other pre-tax subsidies for fossil fuels – which are costing national governments a whopping $US 2.7 trillion in health costs from air pollution-related mortality, disease and lost productivity—not to mention fueling climate change.

As just one stunning example of these so-called “perverse subsidies”, India spends some US$ 7 billion a year on price supports for coal, diesel and kerosene, which cost the country about 20 times more, or an estimated $US 140.7 billion, in health costs from air pollution-related deaths and disease.  Even in the European Union and the United States, fossil fuel subsidies worth over US$ 2 billion cost people and economies in those countries some US$ 200 billion, the analysis found.

The data is part of a new paper released Thursday by the New York-based global health organization Vital Strategies and the Geneva-based NCD Alliance. The brief, Fueling an Unhealthy Future, lines up national expenditures on expenditures for the most health-harmful fossil fuels against the costs to economies and health systems incurred on the other end – in terms of air pollution’s health impacts.

While comparisons of global fossil fuel subsidies and associated global health costs have been made in the past by the International Monetary Fund, among others, this new analysis, the pre-release of a larger technical report, brings the issue down to the level of impacts at country level. By comparing fuel subsidies directly with health costs associated with air pollution, as well as with health system budgets, it casts into sharp relief the level of losses countries and societies incur.

The study also limits the analysis very conservatively to direct subsidies provided by governments to the most health-harmful fossil fuels – such as coal, kerosene and diesel/gasoline – excluding liquified petroleum gas (LPG) which is regarded by many health advocates as an important “transition fuel” for poor households’ energy needs in low and middle-income countries. 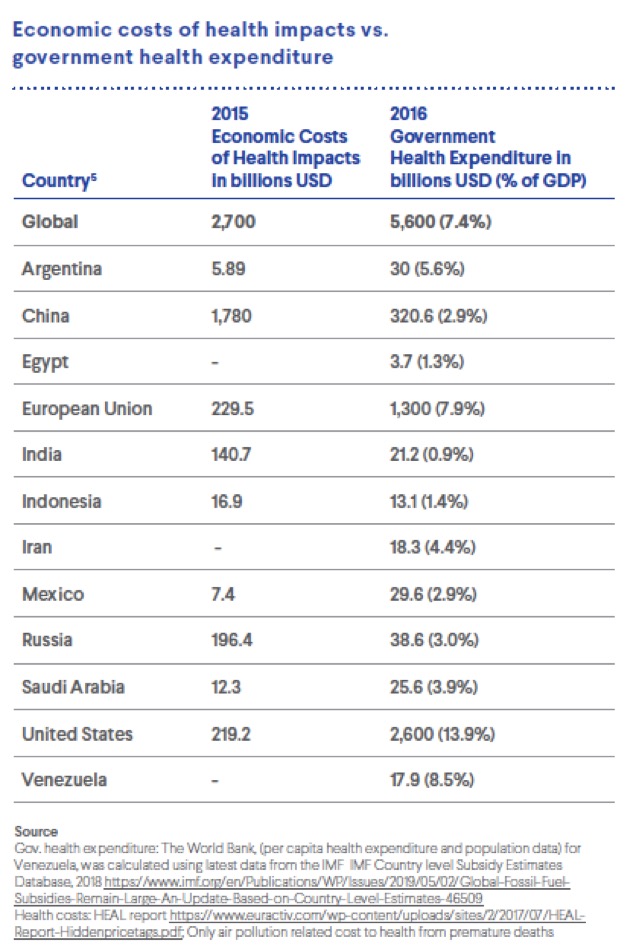 The result is a granular, country-by- country comparison that starkly portrays the out-sized health costs associated with policies that artificially reduce fossil fuel prices, encouraging their use.  This sheds a new perspective on what one of the lead authors of the report, Nandita Murukutla, describes as the “perverse incentives” of fossil fuel subsidies.

Murukutla spoke at a Vital Talks side event Thursday on the margins of this year’s 74th United Nations General Assembly – where global leaders this week announced a new round of commitments to climate action, as well as approving a landmark declaration on achieving worldwide Universal Health Coverage by 2030.

In low- and lower-middle income countries such as India, China and Russia – the estimated health costs attributable to fossil fuel subsidies also are more than five times the entire national government health expenditure, she pointed out.

“We are incentivizing unhealthy industries that will sicken millions and cost trillions,” said Murukutla. “We call these incentives perverse because they go against health and wellbeing. We cannot be incentivizing these industries and then bearing the health costs. We are calling for more policy coherence.”

WHO estimates that some 7 million people a year die from air pollution related risks – and most of those deaths are attributable to noncommunicable diseases (NCDs), including heart attack, stroke, lung cancer and respiratory diseases.

At the same time, NCDs now comprise the lion’s share of the global disease burden – responsible for some 71% of premature deaths and diseases.

NCDs are also the elephant in the room when it comes to financing universal health coverage.  The challenge is huge for low- and middle-income governments that are struggling to cover the very basics such as maternal and child care and immunizations – and it is also affecting more affluent countries that face rising costs from expensive cancer and cardiovascular treatment procedures.

Faced with such a funding gap, global health leaders have recently begun to express much stronger backing for so-called “sin taxes”, also called “health taxes”, that can be applied to sugary drinks, tobacco and alcohol to both reduce consumption and raise revenues for health systems. These are taxes that civil society groups such as the NCD Alliance and Vital Strategies have long championing already for some years as effective strategies in shaping consumer demands and preventing NCDs

An article Wednesday in The Financial Times, co-authored by the heads of the The Global Fund, Gavi, The Vaccine Alliance, and the World Bank’s Global Financing Facility, said that taxing products harmful to health such as tobacco, alcohol or highly-sugared drinks, could be a potentially “valuable contribution” to achieving UHC.

“They have the double benefit of suppressing the consumption of harmful products and providing incremental government revenues,” said the op-ed, by Peter Sands, Muhammad Ali Pate and Seth Berkley, whose agencies together provide about US$10 billion in health aid to the world’s poorest countries and communities.

WHO’s leadership is also getting on the alcohol-tobacco-sugary drinks bandwagon:

However, none of the big agency heads have spoken out in the same way about fuel subsidies. For health advocates, confronting the ways in which fossil fuel subsidies are also fueling deaths and disease is still a relatively new, and edgy topic – which has generally been regarded as a topic of the climate sector.

However, even if this year’s Climate Summit failed to see the level of dramatic new country commitments that advocates say are needed to limit global warming to 1.5 C, it has seen a paradigm shift where climate change is being framed in the context of a much broader range of issues. These include air pollution, foods and biodiversity, oceans’ health and sea level-rise, where climate-related health impacts are being examined through a lens of greater complexity – and linkages more widely acknowledged.

Another new report, Burning Problems, Inspiring Solutions, released last week by the NCD Alliance and the International Institute for Sustainable Development (IISD) calls on governments to fight air pollution from fossil fuels with some of the same strategies that have been used in the past to fight the tobacco industry.

Advocates from the two sectors, tobacco and air pollution, have much to learn from each other, said NCD Alliance Policy and Advocacy director Nina Renshaw, a co-author of the report.  “So why not draw lessons from the action against tobacco smoking to regulate fossil fuels?” she asks.

The report cites case studies of action on tobacco control, and points to lessons for health advocates regarding strategies to:

In the health arena, however, the air pollution-fossil fuel-health nexus remains an more edgy one – more so even than taxes on sugary drinks, alcohol, and tobacco.  And even proponents acknowledge that raising taxes or reducing longstanding subsidies can encounter significant resistance in the halls of government as well as from industry and consumers who can perceive measures as limiting personal choice and freedoms.

Asked what steps could be taken to advance the health arguments for reducing fuel subsidies to a more central place on policymakers’ agendas, Kelly Henning of Bloomberg Philanthropies’ Public Health programme, noted that the philanthropy funds work on both issues, and yet connecting the dots remains a challenge. “It’s going to be quite difficult,” she acknowledged. “I don’t think we have quite figured that all out.” 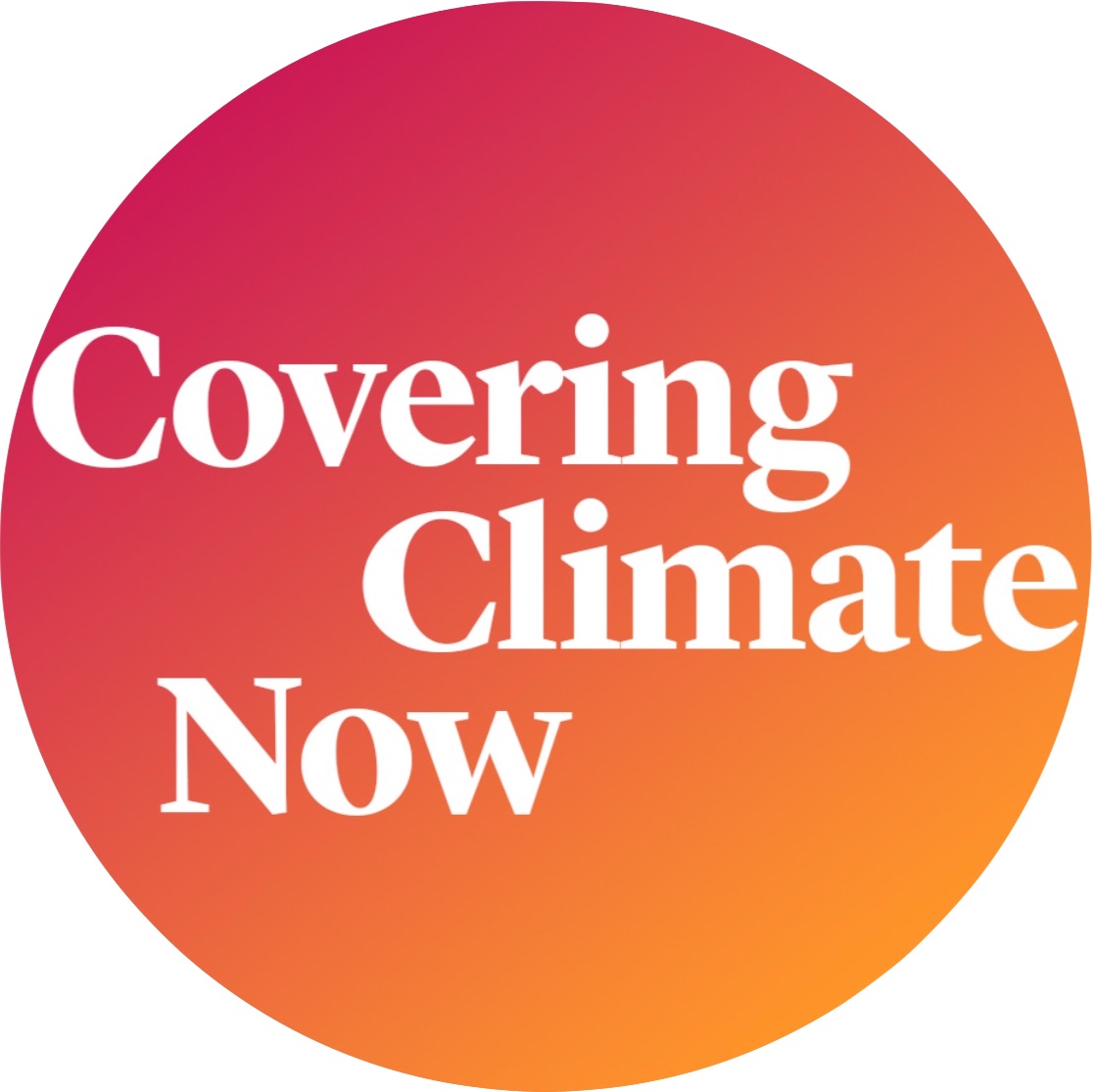