“This is the fastest vaccine prequalification process ever conducted by WHO,” said the organization in press release Tuesday evening. The WHO approval was described as a “critical step that will help speed up its licensing, access and roll-out in countries most at risk of Ebola outbreaks.”

Dr Tedros Adhanom Ghebreyesus, WHO Director-General, called it “a historic step towards ensuring the people who most need it are able to access this life-saving vaccine. Five years ago, we had no vaccine and no therapeutics for Ebola. With a prequalified vaccine and experimental therapeutics, Ebola is now preventable and treatable.”

The WHO move followed Monday’s news of the European Commission (EC) decision to grant conditional marketing authorisation to the pharmaceutical company Merck Sharp & Dohme (Merck) for the first-ever vaccine against the deadly Ebola virus. The announcement drew cheers in the global health community from boardrooms to laboratories where researchers had worked for years to create a safe vaccine for the virus that kills two-thirds of its victims. The EC move followed a recommendation from the European Medicines Agency (EMA).

Monday’s approval of the new vaccine was not necessarily a big surprise. The Merck formulation has already proven to be highly effective under a special compassionate use protocol, which has seen more than 250 000 people immunized during the current Democratic Republic of Congo (DRC) outbreak. As such, it has has been operationally deployed for months as a key part of a “ring strategy” fighting the DRC outbreak, and used for immunizing health workers as well as people who were identified as known contacts of those infected with Ebola.

However, the formal EC decision still represented a huge milestone for a first-ever vaccine to protect against one of the world’s most deadly viruses.  Observers said it should ultimately help speed up production and expand use of the vaccine, which has been subject to supply bottlenecks and shortages at times.

WHO’s Pre-Qualification process or “Pre-Qual” as it is widely known, is a sign-off on the vaccine’s quality, safety and efficiency data, which will help get the product into the field more quickly – expediting national regulatory approvals and paving the way for countries to procure the vaccine from donor-supported programmes at preferred prices.

Seth Berkley, head of Gavi, The Vaccine Initiative, said in a tweet that the Gavi board would also vote on 5 December on a recommendation to “open a window” of support for uptake of “outbreak and preventive vaccines”, such as the Ebola formulation.  The proposal calls for creating a long-term Gavi Ebola vaccine programme including creation of a global Ebola vaccine stockpile, enabling countries to access and rapidly deploy Ebola vaccines in response to outbreaks, Gavi said in a press statement. On top of the stockpile, the Board “will also consider, if recommended, future support for preventive vaccination of high-risk groups outside of an outbreak such as healthcare workers in countries classified as being at high risk.”

Wellcome Trust Head of Vaccines, Charlie Weller, said in a statement: “The Merck Ebola vaccine has already saved countless lives and been key in preventing the ongoing outbreak in the DRC spiralling into a repeat of the 2014-16 epidemic, where 11,000 people died.

“Now it has market authorisation it will be much easier to provide access to the vaccine for those who need it most. It’s been a long journey and made possible by a truly global collaborative effort of researchers, governments, NGOs, companies and funders. Wellcome is very proud to have been among those who have played a part. We commend Merck for their commitment to developing this vaccine. But we should all pay tribute to the brave healthcare workers who have provided the best possible care in conducting the trials, as well as the leadership in the DRC, for this vital research.”

Although the vaccine’s rights are now held by Merck (MSD), in fact, scores of scientists in universities and research institutions across North America, Europe, and Africa contributed to the path-finding research that led to the milestone breakthrough, noted STAT News. It cited John Rose, a scientist at Yale University who developed the vaccine’s biological “delivery system” – a genetically modified vesicular stomatitis virus (VSV) that infects livestock but doesn’t harm people, and could safely carry an Ebola protein into the immune system. “It’s thrilling to see the first licensing of a VSV-based vaccine vector system for use in humans,” Rose was quoted by STAT as saying. “Numerous scientists worked for many years in my laboratory at Yale to develop this potent vaccine platform.”

The European Commission decision on Ervebo also follows on the recent announcement of the launch of a clinical trial for a second Ebola vaccine regimen developed by Johnson & Johnson (Ad26.ZEBOV, MVA-BN-Filo), now getting underway in the DRC, with the support of the European Union’s Horizon 2020 research programme. Unlike the Merck vaccine, the J&J vaccine requires two injections a number of weeks apart to be effective. But it may potentially protect people against multiple strains of the Ebola virus which tend to circulate in endemic areas – while the Merck vaccine only protects against the  Zaire Ebola virus species that has been the cause of the recent large DRC and West African outbreaks. DRC health authorities say the second vaccine will not be tested in the DRC outbreak’s hotspots, but rather in more peripheral areas, which could still be at risk now or in the future. 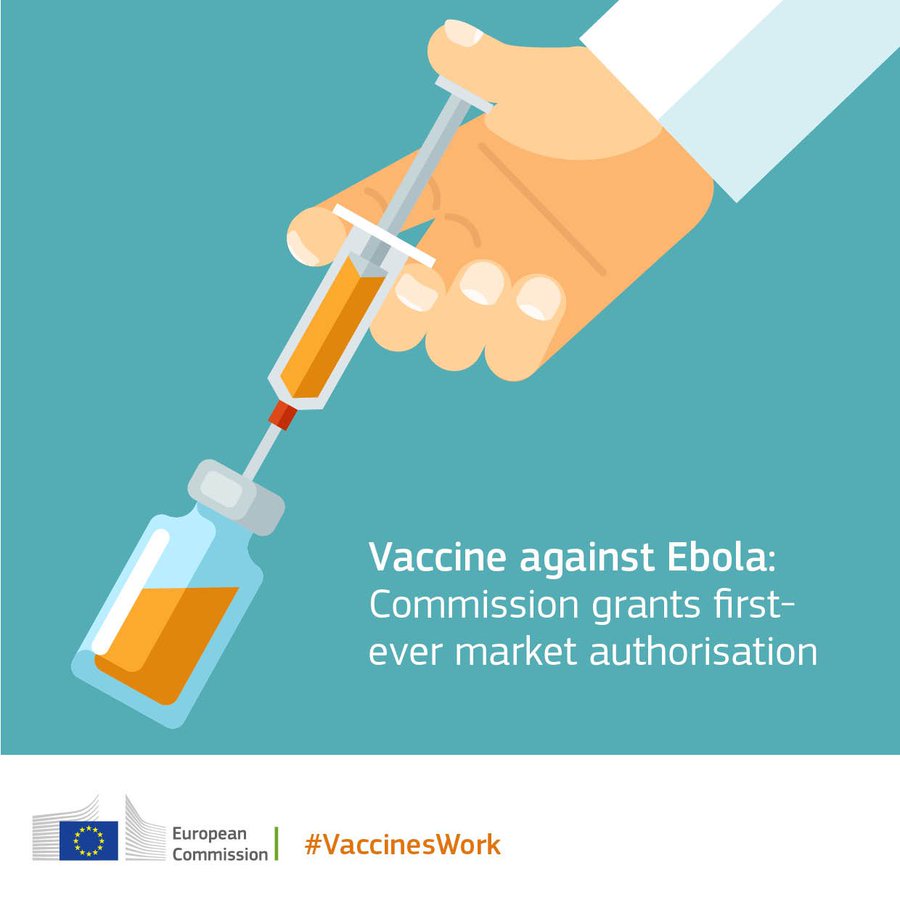 The final approval of the Merck formulation, and test deployment of the J&J vaccine, come just as the current Ebola outbreak seems to be finally winding down after raging in eastern DRC for over a year.  Over the past month, there have been about 19 reported new cases a week, down from a peak of 126 cases a week in April.  However the scattered, rural locations of the new infections continues to confound efforts to entirely stamp out the outbreak.  Sporadic violence against health care workers, and the recent murder of a radio journalist underline the continued resistance that health teams still face to winning broad community acceptance in some areas, for effective Ebola control measures, such as the reporting of new infections to Ebola Treatment Centers, as well as the safe burial of Ebola victims.

In terms of Ervebo, the first clinical trial results of the vaccine (VSV-ZEBOV) in December 2016 showed it provided a high level of protection against the so called Zaire species of Ebola when it was first deployed at the end of the 2014-2016 West African outbreak, which had raged across Liberia, Sierra Leone and elsewhere. Expedited research on the vaccine was funded by Wellcome, DFID and the Norwegian Government among others. The vaccine was thus stockpiled and somewhat more readily available for use in the current DRC outbreak.

“The global community showed the power of working together during the West African Ebola epidemic. Continuing to do so could be key to improving our future epidemic preparedness,” said Weller, outlining the story of the vaccine’s development in a blog, published on the Wellcome website.

“The first research [in July 2015] showing that VSV-ZEBOV vaccine could help protect against Ebola brought sighs of relief. It was an incredible and humbling achievement that had only been possible due to the global collaboration of researchers, NGOs, governments, industry and funders – all working towards a unified goal.

“It suggested that a single injection of VSV-ZEBOV might be highly effective in preventing people from contracting Ebola. …The VSV-ZEBOV news was positive for two reasons. Not only did this vaccine candidate appear to protect against contracting the Zaire strain of Ebola, but it had only taken about eight months to get to this point, rather than many years.

The West African Ebola outbreak killed over 11000 people as well as devastating economies across the region. During the current outbreak in DRC, a total of 3285 cases of confirmed and probable infections had been reported as of 5 November.  Some 2191 people have died since the DRC outbreak began in August 2018, for a case fatality rate of 67%.