Raised in the digital era and fluent in the innovations of technology, youth are the driving force behind many advancements in global health, even spearheading a campaign against falsified and substandard medicines. Fight the Fakes, a campaign to raise public awareness about the dangers of falsified medicines, joined forces with the 72nd World Health Assembly (WHA) on Monday to host a panel discussing the latest technological developments aiding their cause. 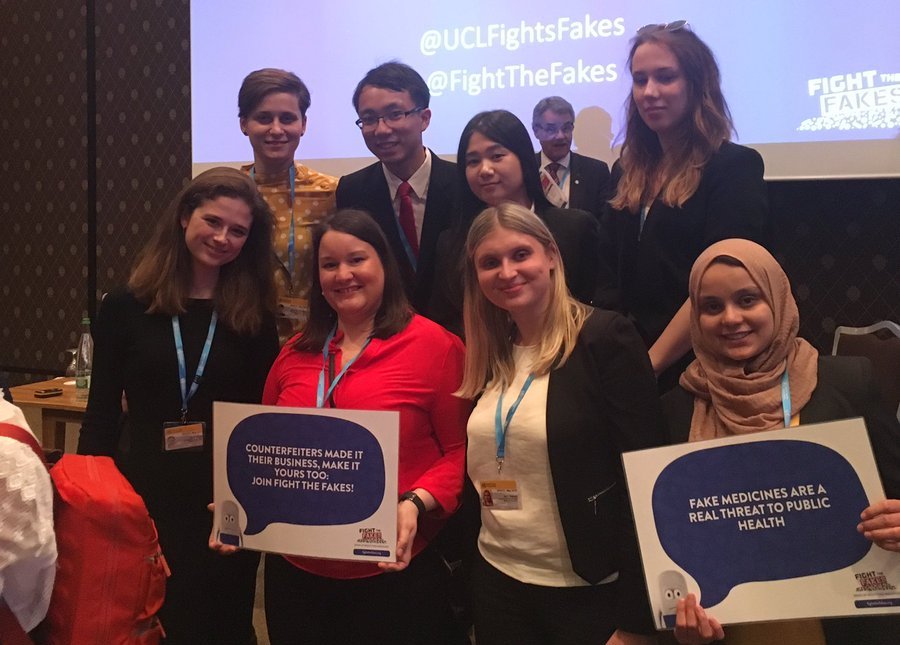 Falsified and substandard drugs are medicines which do not meet quality specifications laid out by the World Health Organization and other regulatory bodies or, in worst cases, are contaminated or do not contain a high enough dosage, if any at all, of the required active ingredient.

According to the WHO, one in every ten drugs in lower- and middle-income countries is fake, but this figure relies on reported cases of fake drugs being discovered. The actual prevalence of fake drugs is likely higher. The International Criminal Policing Association (Interpol) estimates the actual number of falsified drugs reaches 30 percent of all medicines sold globally.

Over one million people die annually due to substandard or falsified medicines, according to the WHO.

Adebayo Alonge, one of the Fight the Fakes event panelists, recounted his story of nearly being one of those deaths. When a high dosage of sleeping pills was sold to him in lieu of medication he needed, he was hospitalised for 21 days at the age of 15.

“I was lucky to have survived,” Alonge told the audience. “But it goes beyond me, because not everyone is lucky.”

His experience led him to take action against dangerous fake drugs using innovative technology. He is the co-founder and CEO of RxAll, an organisation which has developed a molecular sensor device to help patients and health care providers analyse the quality and authenticity of their medicines.

Alonge told the panel he believes the biggest asset digital technology can contribute to the global health world is its availability to many people, particularly young people.

“One thing the WHO can do to help advance innovation is come up with problem statements, and then roll those out to the world and ask young people to come out and solve those problems,” he said. “People are creative when they have open access to be.”

He also said in an interview that the biggest obstacle to technological innovation on health is fundraising. “Big partners don’t want to get involved until they have proof of validity. For me, private partnerships helped us get the funding we needed to validate our technology with a pilot program, and then we were able to attract the WHO. Dedicated funds need to be set aside for deep technology pilot programs, and people must be willing to use new technology on a trial basis.”

The panel was organised by University College of London (UCL) Teaching Fellow and founder of the UCL chapter of Fight the Fakes, Oksana Pyzik, who kickstarted the event by cutting to the heart of its importance to the global community.

“Today is all about action. It is very important to support implementation of new technologies so no one has to second-guess whether their medicine is authentic,” she said in her opening remarks.

The panel was composed of two sections, one made up of tech entrepreneurs and the other filled with representatives from pharmaceutical, academic, and international organisations. Each section discussed the positive impacts of new technology, as well as the obstacles hindering efforts to eradicate trade of fake medicine.

Israel Bimpe of Zipline International, a Rwandan organisation that utilises drone technology to deliver medicines to underserved communities in Rwanda, also called into the panel by video to display his launch site at Zipline. The organisation’s broader mission is to provide the entire global community with instant access to vital medical products.

The panel of officials included Edward Kelley, Director of the Patient Safety Programme at the WHO; Dr Zuburi Muvungi, a representative from the Ministry of Health of Rwanda; Professor Catherine Duggan, CEO of the International Pharmaceutical Federation; Cyntia Genolet, Head of Health Systems and Africa Policy at the International Federation of Pharmaceutical Manufacturers and Associations; and Professor Serge Rudaz from the University of Geneva.

Each of them reiterated the need for innovation to tackle falsified medicines around the world and pledged their support for young people and entrepreneurs in the field.

“Falsifying medicines is a criminal activity,” said Genolet. “We are advocating for counterfeiters to be punished as they should be.”

Maryam Jetha, Student Lead of the UCL chapter of Fight the Fakes, used the last minutes of the conference as a call to action. She laid out education, research, engagement, and policy change as four areas in which digital technology can be used to make massive gain.

“Youth have a huge stake in implementing the agreed strategies,” she said. “Education is a brilliant tool. Pharmacy students study topical subjects like intellectual property and human rights. Why not teach about fake medicines as a topical subject?”