For the second year running, some 37 organizations have launched a week-long mini campaign to raise awareness and promote action against falsified and substandard medicines.  This year’s annual Fight the Fakes week aims to mobilize the public and international global health community to speak up more assertively about the growing threat of fake or substandard medicines under the theme “Be Aware, Speak Up, Fight the Fakes.”

“Poor-quality care is now as big a barrier to reducing mortality than insufficient access to healthcare. This is why ensuring high-quality medicines reach patients should be a key component of Universal Health Coverage initiatives,” said Grey Perry, assistant director-general of the International Federation of Pharmaceutical Manufacturers & Associations (IFPMA), a founding member of the campaign. 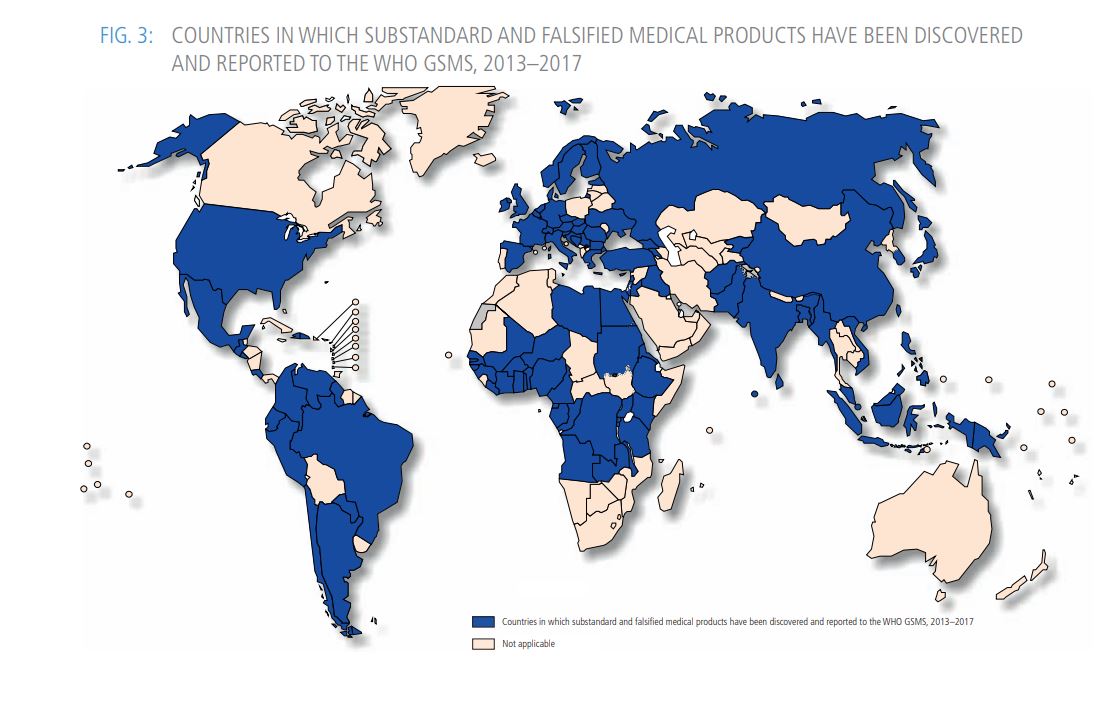 Drugs that deliberately misrepresent their identity and medicines that do not meet regulatory or quality specifications are particularly prevalent in low- and middle-income countries, where an estimated 1 in 10 medical products is falsified or substandard, according to a 2017 report by the World Health Organization.

But the problem can affect higher income regions too. A medical product alert issued earlier this year by the WHO found that a falsified version of the leukemia medication ICLUSIG containing none of the active cancer-fighting agent Ponatinib hydrochloride had been circulating in the WHO Region of the Americas as well as in WHO’s European Region.

There is also evidence that take and substandard products can fuel illicit trade, as well as organized crime, which has broader social and economic implications, according to a report released by the UN Office on Drugs and Crime in June. The report estimates that consumers in Southeast Asia alone spend between US$20 million and US$2.6 billion a year on falsified medicines. 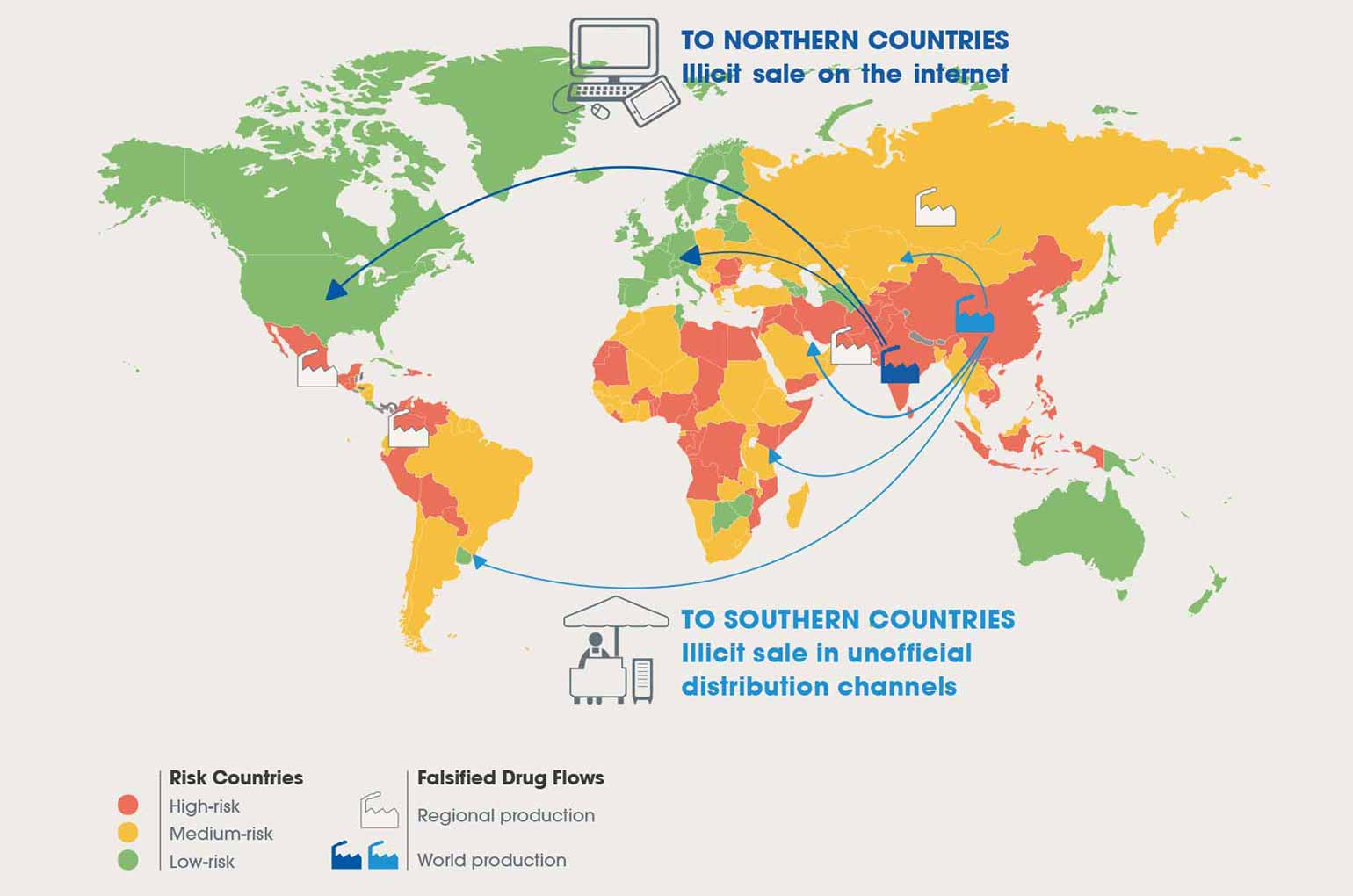 Legitimate pharmaceutical producers in countries such as China and India often outsource parts of their drug production process to manufacturers in countries with weaker regulatory requirements, and that can lead to substandard medications, says the UN Office on Drugs and Crime report. The rapid proliferation of online pharmacies has also facilitated the trade of substandard and falsified medications, the report finds.

The Fight the Fakes campaign has received support from industry, product development partnerships, and civil society actors alike, who say that addressing the issue of falsified and substandard drugs is paramount to ensuring that patients have access to safe and quality essential medicines.

“The risk [of falsified and substandard medicines] concerns everyone in every corner of the world,” said the World Heart Federation’s Director of Partnerships and Programmes, Andrea Vassalotti.

Individual and Societal Risks of Substandard and Falsified Pharmaceutical Products

Antibiotics and antimalarials are among the most frequently reported falsified medical products – accounting for almost 65% of all products reported to WHO.

This also contributes to the growing resistance of many bacteria and parasites to commonly used drugs – known as antimicrobial resistance. Many falsified or substandard antibiotics or antimalarials do not contain the proper dose of the active ingredient. When ingested by patients, exposure to lower doses of the active ingredient allows pathogens to develop resistance to the drug. Although the extent of the effect is unclear, WHO has listed drug resistance driven by subpar medications as a global concern in its 2017 review, A study on the public health and socioeconomic impact of substandard and falsified medical products.

While antibiotics and antimalarials represent the lion’s share of reported falsified and substandard medical products, fake and substandard medicines for other life-threatening illnesses such as rabies, diabetes, cancer, cardiovascular disease, and HIV are also present on the market. This year so far WHO issued 11 alerts for falsified medical products that have been circulating in certain countries and globally.

These medications at best fail to have any impact on the disease they purport to treat, and at worst contain other compounds that can have devastating consequences on individuals’ health.

In March, a falsified medication claiming to contain hydrochlorothiazide, a medicine used to control hypertension, caused blood sugar levels to crash in a number of patients who were prescribed the medication in Cameroon. According to the WHO alert on the product, the medication instead contained glibenclamide, an antidiabetic medication, and was the cause of the hypoglycaemia experienced by patients.

“Currently, cases come to light when high numbers of people are affected by very severe or unusual suspected side effects,” said Oksana Pyzik, senior teaching fellow at the University College London and founder of UCL’s Fight the Fakes chapter.

The combined effects of exposure to substandard and falsified medicines can also erode public trust in health authorities and health systems, mistrust that is already fueled by a growing anti-vaccination movement, said Pyzik.

“We have entered an interesting time in history where trust of science, fact and authority has never been so fragile, fleeting and called into question… As such leading health authorities cannot afford any further dents in credibility that damage trust in health systems,” she added.

“Awareness of the issue remains low amongst health care professionals (HCPs) and the general public globally. Education and training of HCPs, alongside wider campaign efforts such as Fight the Fakes, are of paramount importance to improve reporting rates of substandard and falsified medical products by pharmacists and patients,” said Pyzik.

As part of this year’s Fight the Fakes campaign, partners of the movement have organized events around the world, including a series of events at UCL, a photo competition hosted by the International Pharmaceutical Students Federation, and a panel that will be co-hosted by IFPMA and the Graduate Institute in Geneva on Friday.

Image Credits: WHO, WHO, Sanofi.