The European Parliament on Thursday declared a “climate and environmental emergency” in Europe and globally – calling on EU Member States to meet a target of a 55% reduction in greenhouse gas emissions by 2030, as well as phasing out fossil fuel subsidies in 2020.

The Parliament called on new European Commission President Ursula von der Leyen to include the 55% GHG reduction target into a planned series of measures for a “European Green Deal.” A formal EU strategy to reach climate neutrality as soon as possible, and by 2050 at the latest, should be submitted to the UN Framework Convention on Climate Change (UNFCCC), the Parliament said. The Parliament also asked the European Commission to ensure that all legislative and budgetary proposals fully align with the objective of limiting global warming to under 1.5 °C.

The Parliamentary moves come just ahead of the UNFCCC Climate Conference that begins Monday in Madrid, and just on the heels of the latest UN Emissions Gap Report, which projects that even if all of the current commitments made under the 2015 Paris Climate Agreement are met, global temperatures will rise by 3.2°C by the end of the century, bringing even wider-ranging and more destructive climate impacts.

The report Tuesday by the UN Environment Programme (UNEP) report warns that unless global greenhouse gas emissions fall by 7.6 per cent each year between 2020 and 2030, the world will fail to meet the Paris Agreement target to keep warming to 1.5°C.

“For ten years, the Emissions Gap Report has been sounding the alarm – and for ten years, the world has only increased its emissions,” said UN Secretary-General António Guterres, in a press release. “There has never been a more important time to listen to the science. Failure to heed these warnings and take drastic action to reverse emissions means we will continue to witness deadly and catastrophic heatwaves, storms and pollution.”

In Thursday’s European Parliament decision, members of parliament also said that EU countries should more than double their contributions to the international Green Climate Fund, to fully comply with international commitments to finance the fund, which supports climate mitigation in low income countries. EU member states are already the largest providers of public climate finance however pledges by developed countries have so far fallen short of the global goal of US$100 billion per year by 2020.

“The European Parliament has just adopted an ambitious position in view of the upcoming COP 25 in Madrid. Given the climate and environmental emergency, it is essential to reduce our greenhouse gas emissions by 55% in 2030. It also sends a clear and timely message to the Commission a few weeks before the publication of the Communication on the Green Deal” Pascal Canfin, French chair of the Committee on the Environment, Public Health and Food Safety, was quoted as saying on the EU Parliamentary website.

Members noted that aviation and international shipping sectors, in particular, need to make further reductions and that all EU countries should include emissions targets for both in their nationally determined  contributions (NDCs), the voluntary commitments system created by the 2015 Paris Climate Agreement.

As for the latest UN Emissions Gap Report, it concludes that based on present trends, national commitments to emissions reductions must increase at least fivefold to keep temperatures below 1.5°C goal and threefold to meet the goal of an average 2°C rise in temperatures.

The report assesses the gap between current emissions levels, national commitments for emissions reductions by 2030, and what would actually be needed to meet the 1.5°C and 2°C targets of the Paris Agreement. This year’s report found that emissions in 2018, including from land-use changes such as deforestation, hit a new high of 55.3 gigatonnes of CO2 equivalent. Over the past decade, greenhouse gas emissions have risen 1.5 per cent annually.

To limit temperatures to the 2°C goal, annual emissions in 2030 would need to reduce climate emissions by 15 gigatonnes of CO2 equivalent below that of existing national commitments (NDCs) by UN member states. Annual emissions by 2030 would need to be 32 gigatonnes lower in order to meet the 1.5°C goal. On an annual basis, this means cuts in emissions of 7.6 per cent per year from 2020 to 2030 to meet the 1.5°C goal and 2.7 per cent per year for the 2°C goal. 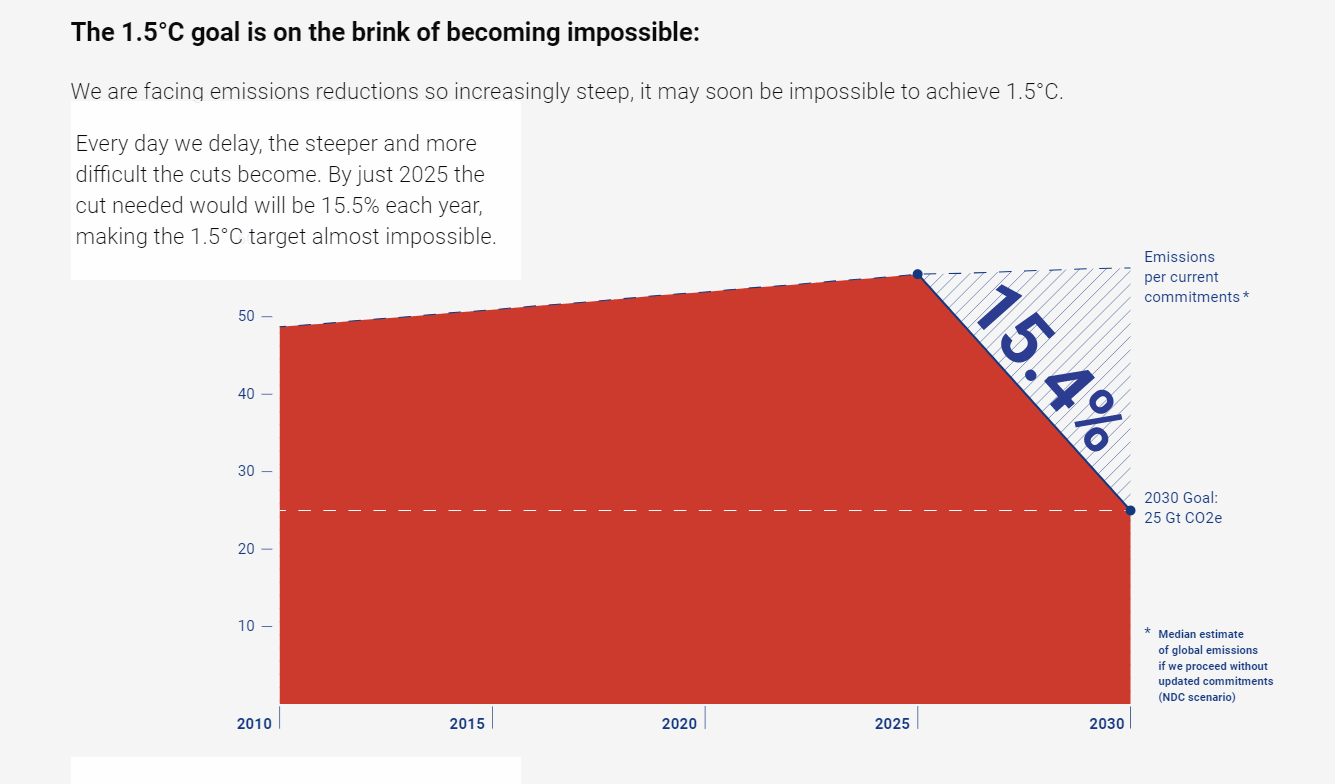 The Intergovernmental Panel on Climate Change (IPCC) has warned that temperature rise beyond 1.5°C will increase the frequency and intensity of climate impacts, in unforeseen ways.

“Our collective failure to act early and hard on climate change means we now must deliver deep cuts to emissions – over 7 per cent each year, if we break it down evenly over the next decade,” said Inger Andersen, UNEP’s Executive Director, in the UNEP press release. “This shows that countries simply cannot wait until the end of 2020, when new climate commitments are due, to step up action. They – and every city, region, business and individual – need to act now.”

“We need quick wins to reduce emissions as much as possible in 2020, then stronger Nationally Determined Contributions to kick-start the major transformations of economies and societies. We need to catch up on the years in which we procrastinated,” she added. “If we don’t do this, the 1.5°C goal will be out of reach before 2030.”

The world’s largest economies – G20 nations – collectively account for 78 per cent of all emissions, but only five G20 members have committed to a long-term zero emissions target, UNEP says.

In the short-term, developed countries will have to reduce their emissions quicker than developing countries, UN leaders have stressed. However, as emissions from China as well as other emerging economies rise sharply, the new message has been that countries at all economic levels need to pull together, and developing countries can even leapfrog over polluting technologies and adopt cleaner technologies at a faster rate.

The report also focuses on the potential of selected sectors to deliver emissions cuts. This year’s report looks in depth at the potential of energy efficiencies in the use of materials for buildings, construction and industry, which make significant contributions to closing the emissions gap.