The ongoing Ebola outbreak in the Democratic Republic of the Congo (DRC) is not related to the lack of means or experience to fight the epidemic, but the difficulty to reach communities, the World Health Organization Director-General told the World Health Assembly today. The DRC Minister of Health illustrated the complexity of the response, linked to the security environment as well as the density and high mobility of the population in affected zones.

For the moment, the epidemic is contained in DRC, but repeated attacks against health facilities and workers, along with mistrust of communities, combine to form a high risk situation with concerns of further spread of the virus.

WHO’s Strategic Advisory Group of Experts (SAGE) on 7 May released new recommendations on the Ebola epidemic, noting “a large increase in the number of cases” in the preceding weeks. The recommendations suggested innovative operational strategies, alternative dosing of the vaccine, and the introduction of another candidate vaccine in certain cases. 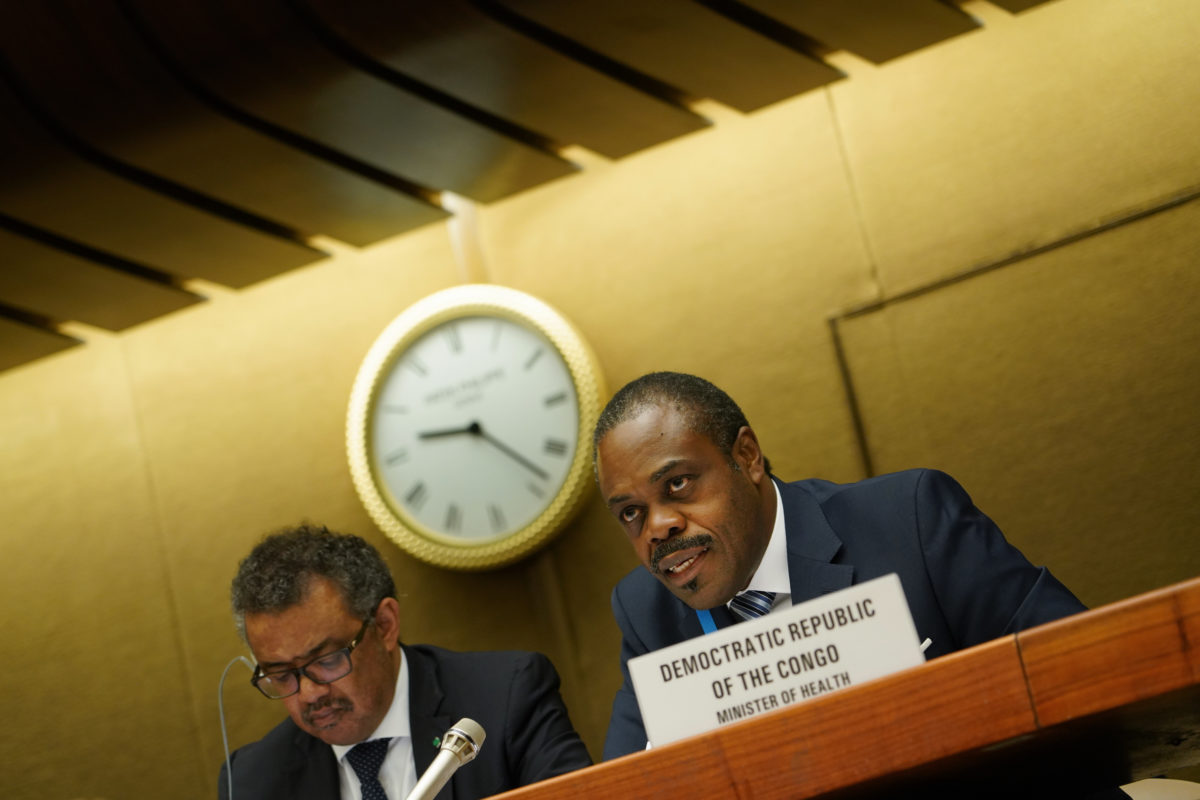 Addressing the 72nd World Health Assembly (WHA) today, Oly ILunga Kalenga, DRC Minister of Health, said the response has to be adapted every month to address the virus’ progress, and hotspot outbreaks.

The epidemic, which started in August 2018, has been contained to two DRC provinces, he said, despite the high mobility of the population. Control checkpoints have screened over 50 million people crossing the borders of the provinces, according to Kalenga, and over 100,000 people have been vaccinated.

Several factors have been hindering the Ebola eradication effort since the beginning of the epidemic in August 2018, he said, detailing means to address three identified weaknesses.

The first, he said, relates to silos, and the compartmentalisation of different actors and response actions. An integrated approach of all health system actors is key to bring communities into the Ebola response, he said, underlining that the “expert approach” has promoted a lack of respect between different health actors. He suggested that donors could contribute to this de-compartmentalisation by basing their donations on operational action plans, so that all response actors are financed according to those plans. This would help to clearly define roles, encourage the sharing of information, and make those actors financially and operationally accountable.

He stressed the need to improve data analysis capability, as a way to address the second weakness, so that the decision-making process of the response is guided by this analysis. He also talked about the necessary accountability of all health actors, including financial accountability.

The third relates to strategy implementation. The strategy needs to be based on an efficient operational action plan, he said, applied and tailored to each step of the response and each actor involved. A data collection system should be put into place to increase the ability to measure the virus-spreading risk, Kalenga said, adding that evaluation tools should be used to monitor the use of resources and finances.

No Correlation Between Community Engagement and Violence

Kalenga warned against mixing the question of community engagement with the question of violence, and asked that a clear distinction be made between the two. Not doing so would be dangerous, he said, and would imply that communities are intrinsically violent. Each problem needs a completely different approach, he said.

Community engagement issues are linked to an access problem, and to the fact that all actors remained in silos. Put yourself in the position of the communities, he suggested, and deal with different health actors coming to them with different messages. It is also important to respect communities and to listen to them, not to approach them with an expert approach. One key asset is to engage traditional leaders, he said, who are the main actors that hold together the social fabric of those communities, which have been living in conflicts and war for over 20 years.

WHO Concerns Over Attacks, Further Spreading of Epidemic

Matshidiso Moeti, Regional Director for Africa, said attacks on the response team are “deeply concerning” and the risk of Ebola spreading to neighbouring countries is still high. However, she said the nine countries at risk (Angola, Burundi, Central African Republic, Republic of Congo, Rwanda, South Sudan, Tanzania, Uganda and Zambia) have worked “tirelessly” to improve their preparedness capacities. All nine countries now have laboratory capacity to conduct testing, and 16 Ebola treatment centres were established in those countries. She, however, signalled a gap in funding. Out of the US$60 million necessary to support containment in DRC and the nine countries at risk, only some US$32 million have been raised. 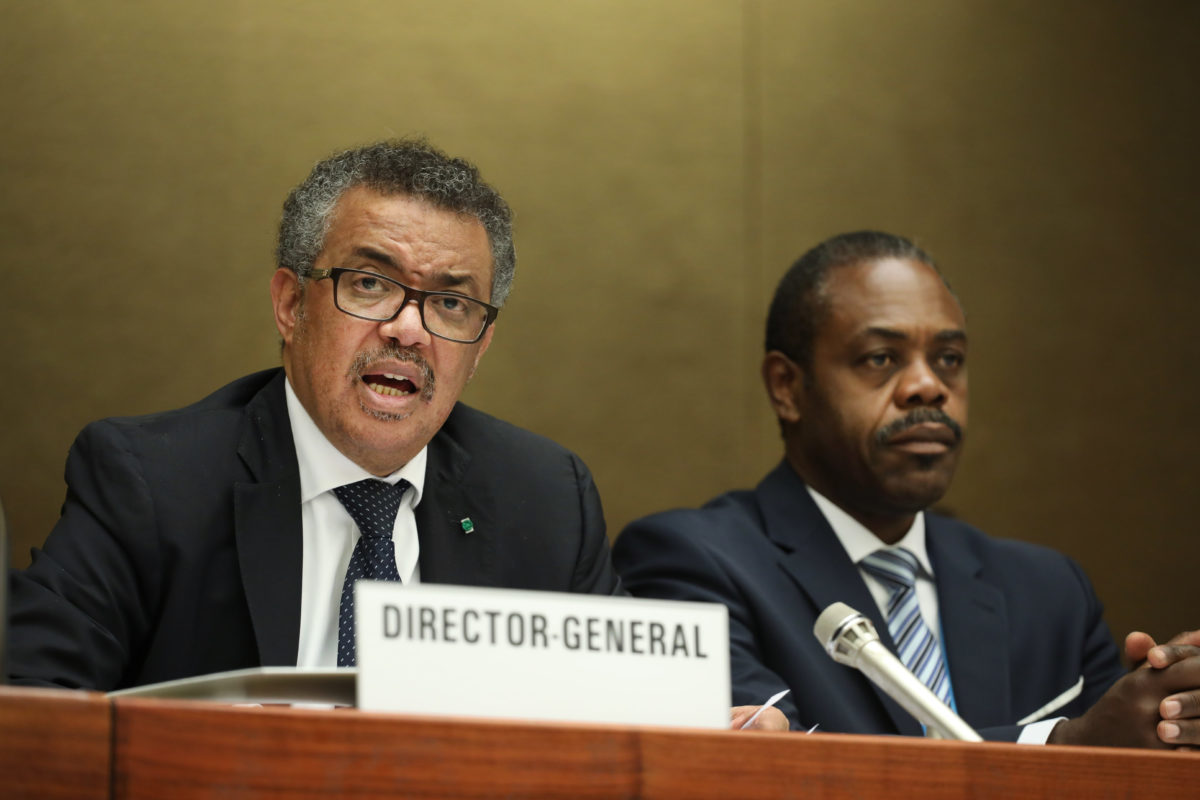 WHO Director-General Tedros Adhanom Ghebreyesus (Dr Tedros) acknowledged that this Ebola epidemic is yet the most complex, with 1900 cases reported in the past 9 months; with the struggle to contain the virus in a volatile, insecure environment; and with the politicisation of Ebola.

Dr Tedros said that over 130 attacks were conducted against the health facility in North Kivu, triggering the departure of key partners on the ground and leading to delays in testing, vaccination, and care of patients.

“We know how to stop Ebola but do not have access to communities,” he said, underlining the “highly effective vaccine” now available (although not yet approved by health authorities), and the efforts deployed by the WHO to improve coordination with other United Nations agencies and international non-governmental organisations. “We cannot stand back and watch this disease spread further,” he said, adding that “together we will beat Ebola.”

A representative of Gavi, the Vaccine Alliance, said the Alliance has provided US$15 million to support operational costs in DRC, and the stockpile of vaccines is being replenished. If the SAGE recommendations are followed and the vaccine dosage is decreased, the available supply may be sufficient, he said, but if a wider vaccination strategy is adopted, the supply situation will have to be reassessed.