Bad Hofgastein, Austria – A call to action to make stronger individual and collective commitments for climate change and health marked the end of the European Health Forum (Gastein).

A recent report found that the healthcare sector is responsible for approximately 4.4% of global emissions. At the same time, it has been established that climate change fuels health issues such as increases in vector-borne disease, air pollution-related illnesses, and natural disasters. This relationship was highlighted by many of the panelists, who discussed the roles of individuals, governments, the health sector, and civil society in taking climate actions to improve health, and vice versa.

The discussions around the climate-health nexus ended a three-day forum, organized around the theme “a healthy dose of disruption,” where over 600 policy makers, academics, clinicians, public health professionals, and young practitioners gathered to discuss topics ranging from cannabis regulation to electronic health records. 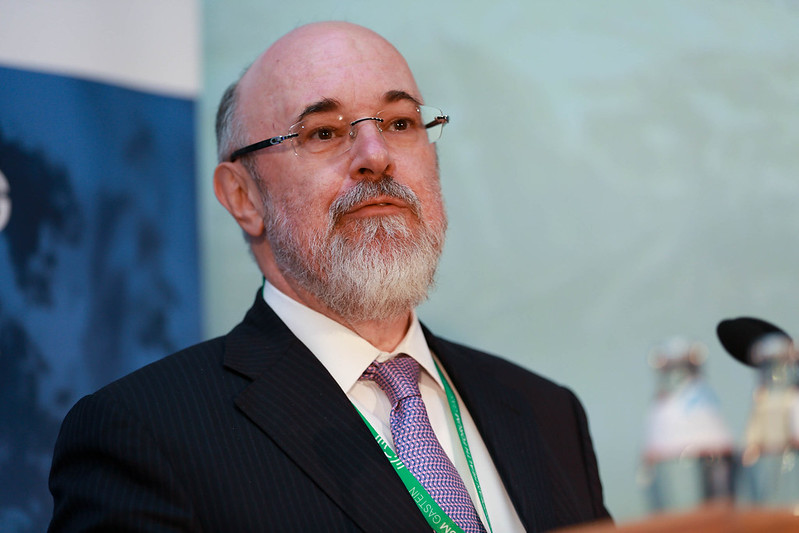 Clemens Martin Auer, president, European Health Forum Gastein – Step outside your narrow interest or silo and be part of this community of healthy disruptors because if we don’t do it, others will and their disruption will be destructive. Do it as a trailblazer, protector, a hospital worker, and illuminator, do it in your agency, in an NGO, as a health professional… There is no classical ‘treatment’ for climate change – it is a true multidisciplinary, intersectoral issue which affects everyone in this room. 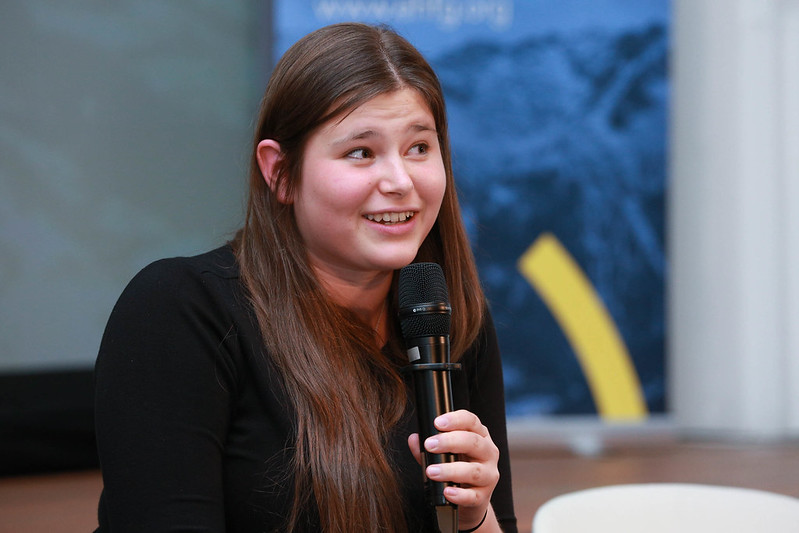 Stella Auer, Extinction Rebellion, Austria – Truly ask yourself, with all that I currently know about the climate and ecological crises, am I doing enough? Am I acting accordingly?… Every other form of protest has not worked so far, and [climate change] has never been as dangerous as this situation we are in… All of you in the health sector have an important role to play, but before we can have such changes we need some form of disruption in the system. Civil disobedience has been very effective if you get 3.5% of the population involved, so I would ask you just as people to come join some form of rebellion. 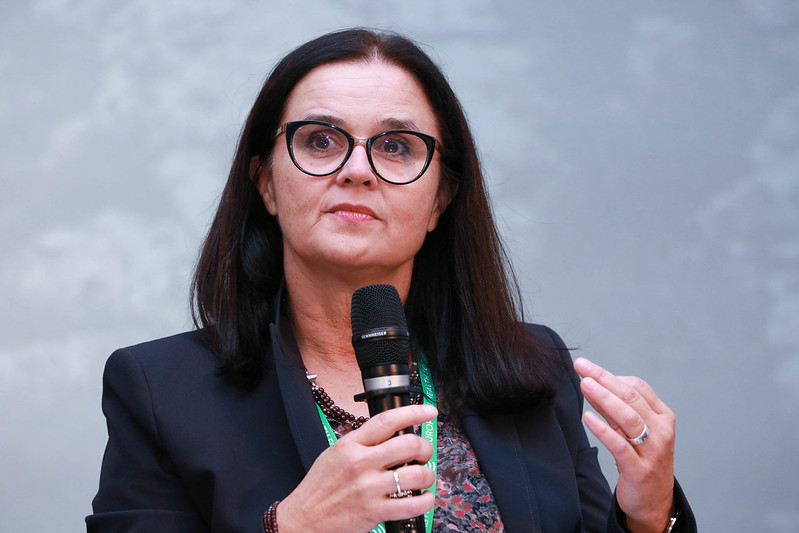 Brigitte Zarfl, minister of Labor, Social Affairs, Health and Consumer Protection, Austria –  The situation around health and climate change is well known, there has been some efforts around that but we all know it is not enough…We have prepared systems to deal with the existing outcomes, regarding heat, air pollution and so on, but now we see that we have to use them. We have installed a heat telephone in Austria and had to activate it in the last two summers to protect vulnerable groups by informing them how to cope with the hot temperatures especially in the bigger cities…But we are also acting as producers of carbon dioxide… Health systems contribute to nearly 7% of the carbon dioxide production in Austria. This 7% of carbon dioxide emissions is caused by the use of pharmaceutical products, their production and their distribution and by the health sector, ambulance, and by the ways patients and professionals go to providers and to work places. We are working towards a better organization [to control healthcare sector emissions]. 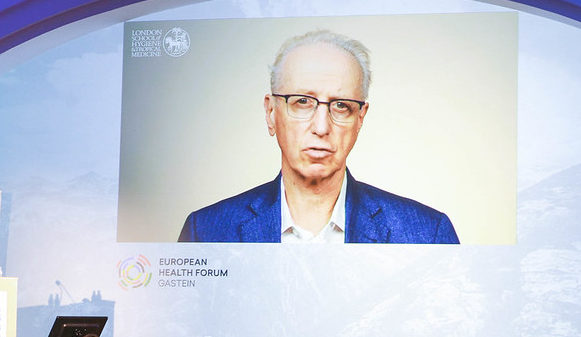 Andrew Haines, professor, Environmental Change and Public Health, London School of Hygiene and Tropical Medicine (LSHTM) – We can see the direct health effects [of climate change] from rising death rates from increased temperatures, increased frequency of floods and other natural disasters, and reduced labour productivity. We can see Indirect effects from changes in distribution of vector borne diseases and water borne diseases, and malnutrition from declining and lower nutritional-quality crop yields. Social and economic effects of climate change will push 100 million people back into poverty and increase the risk of conflict… The WHO estimates of a quarter of million extra deaths [due to climate change] per year are underestimates because they only reflect a limited number of health outcomes… We’re moving towards catastrophic health effects towards the middle of the century if we exceed the 1.5 degrees Celsius threshold, and we have a high probability of breaching the 2 degrees threshold. We are becoming increasingly aware that the health care sector is a major emitter… if it was a country, it would be the fifth biggest emitter of the world… In Europe we have a number of partial success stories. England’s National Health Service was able to reduce its emissions by about 18%. In Scandanavia and the Netherlands, we see a number of health care facilities moving towards zero emissions facilities. 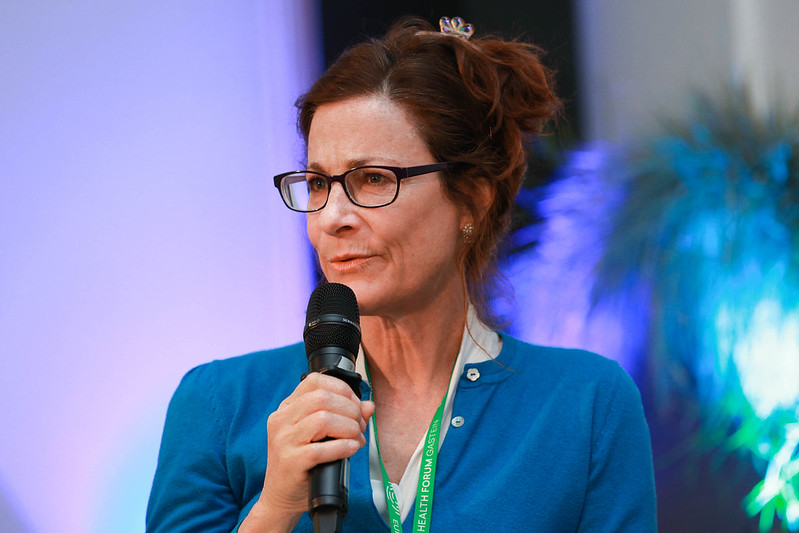 Stefi Barna, co-director, Center for Sustainable Healthcare, UK – Even if we decarbonize our energy [in the healthcare sector], that only addresses 20-30 percent of health care. We have to work with each health specialty to see how we can reduce the carbon footprint. We found that implementing decarbonizing measures improves staff morale and reduces waste … Public health has the skills to bring this institutional change about… We can help them to ask the questions and take the lead in decarbonizing the way that medicine is practiced through designing leaner pathways and keeping people out of hospitals. 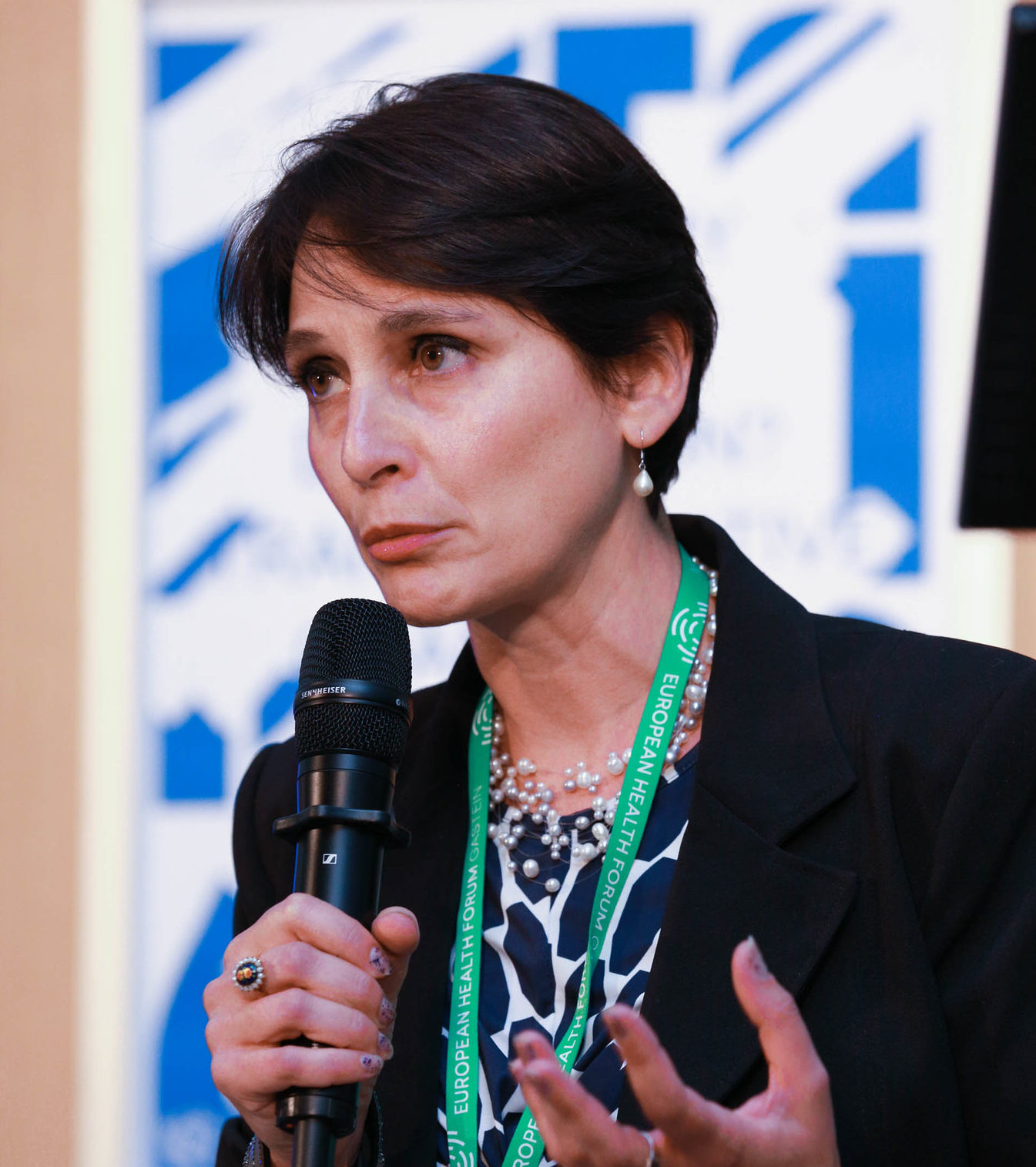 Veronika Manfredi, director, Quality of Life, European Commission Directorate-General for Environment (DG ENV) – The EU is one area of the world where we have managed to decouple growth from economic interests… We have the tools, we have the technologies. For example, in the area of water filtering techniques… EU companies have 41% of the international patents… What we need is stronger political will for climate action. In the first 100 days of their term, the EU president has promised to come up with a new climate law to achieve climate neutrality by 2050 that will really push Europe forward… However, we are facing a public health emergency when it comes to air quality. We’re very clear about zero tolerance for infringements of current standards, but we also want to make sure that European standards are fully aligned with WHO’s latest recommendations. The EU is not even aligned to the 2006 recommendation of the WHO [for fine particulates pm2.5 and 10] so we are not as protected as we should be.

Key Remarks from the Fireside Chat with Ilona Kickbusch 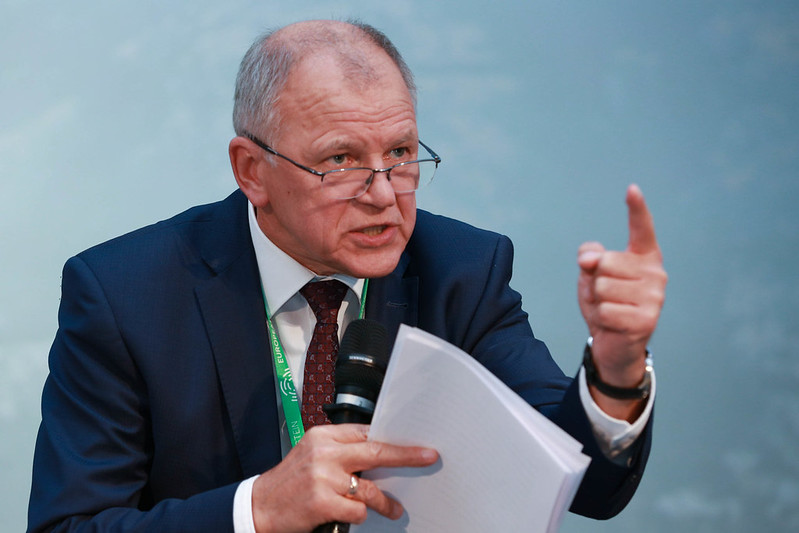 Vytenis Andriukaitus, outgoing commissioner for Health and Food Safety, European Commission – I follow the old definition of health which is a complete state of social and mental health being… and not merely the absence of disease. We need to keep as healthy as possible as long as possible… is it the goal of the health care system? Of course not. I practiced 27 years, I know what to do in surgery and what I can do with patients, but I don’t know what to do with people. We need to speak about the synergies of different pandemics; infectious pandemics, behavior pandemics, commercial pandemics… Young people need to create ten commandments to be healthier – including stop smoking. One cigarette butt can contaminate 150 meters of water, not only with toxic chemicals but also microplastics… We have commercial pandemics because multi-national companies are practicing an ethic of ‘produce, consume, and discard,’ when they should be practicing an ethic of ‘produce, consume, recycle.’ We need to raise health high on the agenda… how can climate disrupters understand that health is their business? 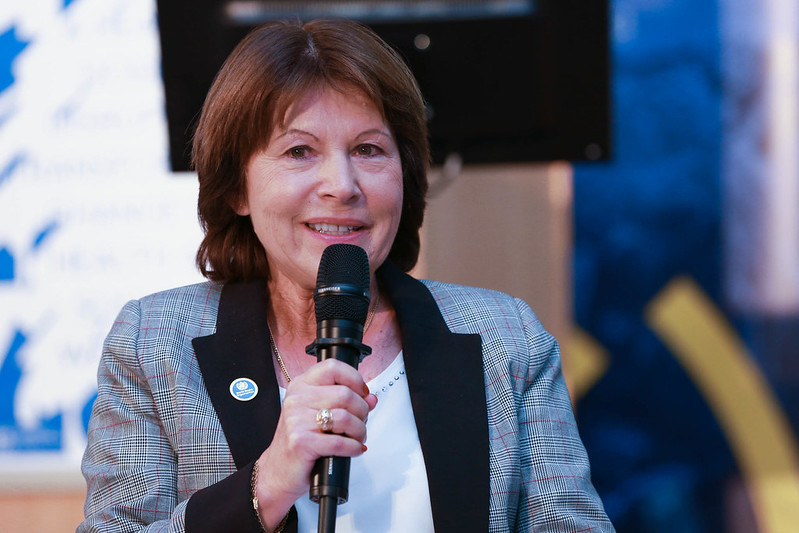 Piroska Östlin, acting regional director, WHO Europe Regional Office – WHO is very serious about environment and health, including climate change.. In Europe we are very active; we have a center in Bonn and are working on national action plans to help countries adapt to climate change and take mitigation measures… Just last year, we released the first ever WHO report on climate change and health, which helped inform the negotiations of all the parties to the United Nations Framework Convention on Climate Change (UNFCCC) Conference of the Parties (COP) in December 2018. We’re also active through the European Healthy Cities movement… somehow it is easier to work with several sectors all at once in cities, but we need to scale that model up for use at the national level. 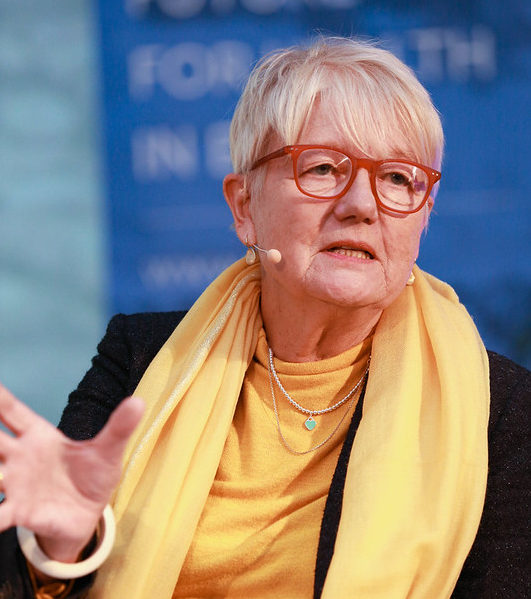 Ilona Kickbusch, professor and chair of the Global Health Centre, Graduate Institute of International and Development Studies, Geneva – This movement needs a direction, and the direction is health in combination with climate change as a major determinant of health. It needs passion to bring about change, it needs better collaboration. There needs to be a much more forceful debate [among multilateral organizations]… that needs to reflect that passion and commitment. The WHO is definitely becoming more political and will become more political as it moves forward, but also needs a different types of disruption… This movement needs a lot of work behind the scenes that is not that visible… We must also respect those people who we often don’t see and whose names we don’t know.