Demonstrators poured onto the streets and politicians pointed fingers as Delhi’s air pollution levels soared above the threshold air quality monitoring stations could record on Sunday. The Indian Supreme Court issued a scathing statement calling for politicians to stop “passing the buck” on the air pollution issue and take urgent action in the “public health emergency” declared last Friday.

Levels of dangerous PM10 small particles rose above 999 micrograms/cubic meter Sunday morning throughout the city, breaking previous records. And levels of even more deadly PM2.5 fine particles hit a peak at around 860 in parts of the city at times on the same day – over 20 times higher than the WHO Air Quality 24 hour guideline limits – [50 micrograms/m3 PM10 and 25 micrograms/m3 PM2.5].

“Delhi is choking every year and we are not able to do anything,” said Justice Arun Mishra in a Supreme Court hearing about the air pollution. The Court summoned top bureaucrats from Delhi as well as neighboring states to attend a hearing on Tuesday over the crisis.

Defunct “state-machinery” has resulted in politicians passing responsibility for the air pollution issue between city and national governments without taking real action to reduce the annual spike in dangerous air pollution, the Court said, in a far reaching order obtained by Health Policy Watch calling on bureaucrats at all levels and in urban and rural regions to halt burning. The sources of air pollution include urban vehicles, urban waste incineration, industrial and household emissions as well as uncontrolled crop burning from the surrounding Punjab and Haryana, the Court documents noted. 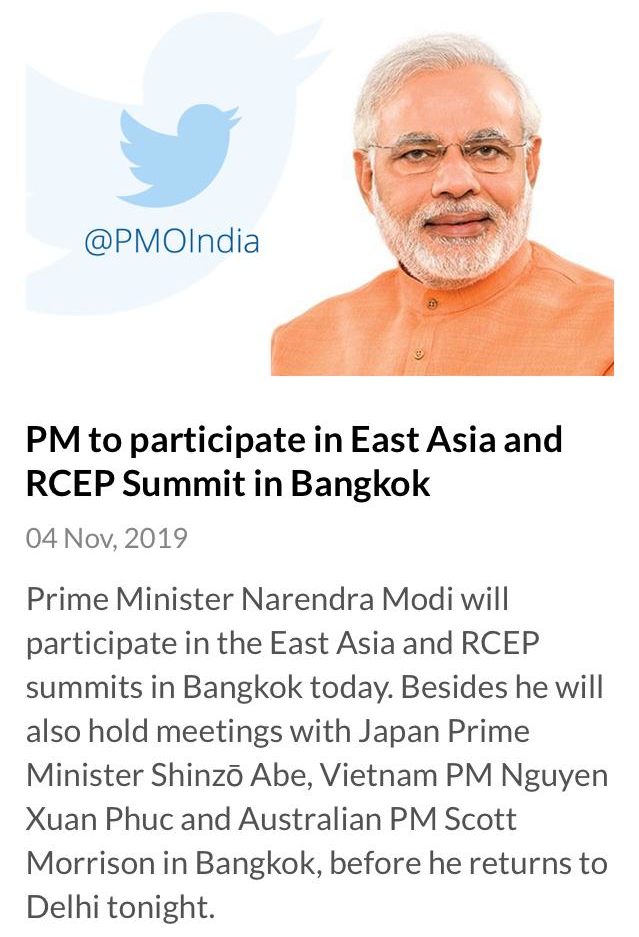 But India’s Prime Minister (PM) Narendra Modi maintained his silence over the crisis, while on a trip abroad. According to the prime minister’s official website, PM Modi was spending Monday evening in Thailand at an annual Summit of Asian Heads of State, before returning to Delhi Monday evening.

The Prime Minister’s Office had announced it would be hosting an emergency meeting on the issue soon. Still, citizens were critical of prime minister Modi’s decision to remain away from Delhi during the “public health emergency.”

Delhi politicians such as Akanksha Ola are up in arms, calling the national government led by PM Modi and local government of Arvind Kejriwal “equal partners in crime on strangulating the people of Delhi.”

City residents are furious at the political relay, staging protests and Tweetstorms to flood the streets and social media with news of Delhi’s plight. Members of the Indian Congress party protested in front of Delhi Chief Minister Kejriwal’s residence on Monday, while twitter hashtags such as #DelhiChokes and #DelhiAirEmergency were trending all around the world.

Emergency efforts to reduce air pollution announced on Friday, such as temporarily banning construction in the city and permit private vehicles to circulate only on alternate certain days as per the odd-even digits of license plate numbers, have either failed to be enforced or failed to be effective.

Supreme Court members asked city leaders to justify the “logic” behind the odd-even scheme, asking them to present concrete data showing that it actually reduced the number of polluting vehicles on the roads or had a measurable effect on the air pollution levels.

Speaking to Health Policy Watch, clean air advocate Jyoti Pande Levakare praised the High Court for taking action to call all of the governing parties together, but said that without political movement, as well, the system remains stalled.

“Only the Supreme Court seems to care. Nothing else has really changed. Our prime minister is breathing better air in Thailand while we choke here. Indian lungs are cheap,” she said. “Unless clean air is made a mission of national importance, unless human health is made a priority, we will continue to lurch from crisis to crisis.”

A major focus of controversy continued to be the uncontrolled “stubble burning” of rice fields in Punjab and Haryana – whose smoke has been drifting into the city and contributing to about 40% of Delhi’s air pollution levels, according to informed estimates.

Clean air advocates as well as scientists note that the burning of stubble had become a more serious problem over the past decade – after the government ordered farmers to delay their planting and harvest season by a couple of months.  Since the prevailing winds shift towards Delhi in late fall/early winter, that has left the city more exposed than it was in the past to the burning of harvested rice stalks.

Also, more and more rice is being grown in Punjab, replacing other indigenous food staples that didn’t require burning of fields, post-harvest, critics have said. However, with no clear leadership from prime minister Modi’s office, solutions for the seasonal issue seemed to be hostage to competing political and commercial interests.

Subsidies for machines to clear the rice stubble from fields have been proposed – although those are unlikely to be affordable to smallholder farmers.  Others have suggested replacing rice with GMO cotton or maize for livestock and poultry feed – although critics say that this would convert valuable farm production from plant-based foods for human consumption to foods for livestock feed – in a country that has a high proportion of vegetarians. Water-hungry cotton would remove valuable land from food production altogether — as well as causing even further damage to aquifers. Against the storm of debate, few people seem to be thinking about practical solutions that fit India’s land resources and food production needs, said Lavakare, although those have been laid out over and over.

“Farmers in Punjab and Haryana burn crop stubble to clear their fields as they have no real alternatives. Burning is the fastest way to turnaround their capital—their acreage.” she wrote in an article published in the Delhi-based Financial Express during last year’s crisis, in October 2018.

“These are areas that used to grow low water-use, nutrition-dense coarse grains such as pearl millet (bajra), finger millet (ragi), sorghum (jowar), barley, rye and maize. Perhaps the government can offer better price support to encourage farmers to switch back to crops like these…Incentivizing low water-use crops like millets instead of [rice] paddies, paying for farm-waste – especially involving enterprises that can use the waste as a raw material—make better sense.”