Health care workers in conflict zones are frequent targets of crisis-related violence, and the dangers they face are on the rise. At least 973 attacks on health workers, health facilities, health transport vehicles and patients took place in 23 conflict-ridden countries during 2018. The attacks resulted in 167 deaths and 710 injuries, according to the sixth annual Safeguarding Health in Conflict Coalition report. The numbers mark an increase from the 701 documented attacks of 2017 and is the second year in a row with such an increase.

This year’s report, “Impunity Remains: Attacks on Health Care in 23 Countries in Conflict in 2018”, documents the various attacks on health workers and facilities that have disrupted efforts to curb global disease outbreaks.

Increasing violence poses a threat not only to health care workers and others in the direct range of assailants, but also the wider population needing access to treatment, notes the report, which documents these lesser-discussed consequences of violence, including increased disease transmission, illness, and mortality.

For instance, six countries have seen an increase in attacks against immunization teams addressing critical outbreaks of Ebola and polio, the report notes. These include: Afghanistan, the Central African Republic (CAR), the Democratic Republic of Congo (DRC), Pakistan, Somalia and Sudan. These attacks cost lives both immediately and in the aftermath, when patients lose access to crucial care. 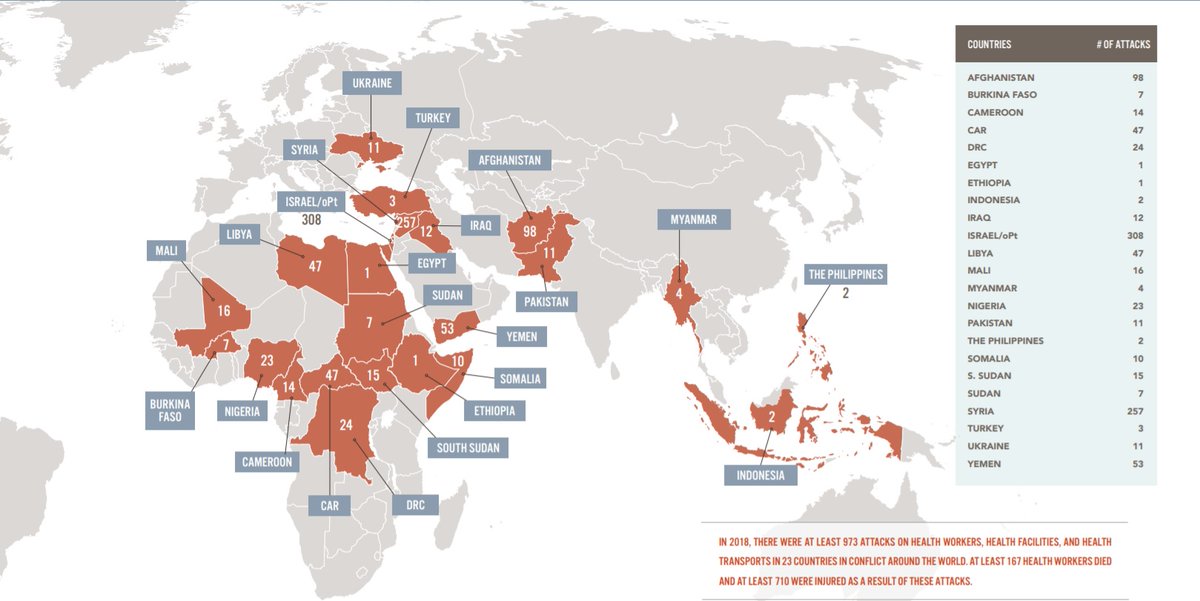 “Attacks on health facilities and health workers not only cause immediate damage and loss of life but also impede access to essential health services for vulnerable people around the world, jeopardizing universal health coverage and global health security,” said Carol Bales, Advocacy and Policy Communications Manager at IntraHealth International, secretariat and member of the Coalition that sponsored the report.

Syria and Afghanistan also faced air strikes and bombings on hospitals and care facilities, earning the highest death tolls of all the affected countries. In addition, CAR, Libya, Gaza and Palestinian territories in the occupied West Bank, and Yemen all face increasingly dangerous levels of conflict.

The report also details the steps taken by national governments, the World Health Organization (WHO), and United Nations (UN) to curb this conflict, though it does not hesitate to point out the slow pace of these efforts, and provides recommendations for how the international community can better protect health workers and civilians in their care.

“The Minister of Health of the Central African Republic has personally engaged with armed groups to demand that they cease violence inside hospitals while assuring them of equal access to health care,” said Leonard Rubenstein, Chair of the Coalition and Senior Scientist at Johns Hopkins Bloomberg School of Public Health and the Johns Hopkins Center for Humanitarian Health.

“In Pakistan, the government increased police protection of community health workers engaged in vaccination campaigns. Afghanistan and Colombia have adopted laws that prohibit punishment of health care providers for offering care to people in need.”

In 2016 the UN Security Council adopted Resolution 2286, condemning attacks on medical personnel working on conflict zones and demanding that all armed parties in those zones comply with international humanitarian and human rights law. The resolution works in addition to the Geneva Conventions and its Additional Protocols, which prohibit attacks on health facilities and workers.

The WHO launched its Surveillance System for Attacks on Health Care (SSA) the following year. The tool collects data on attacks on health care providers all over the world and monitors how those attacks impact the health of the affected population. This data can then be utilized by health care workers, governments, and international organizations to strategize against increasing violence.

Non-governmental organizations have also urged the international community to take a stand. Geneva Call, an organization dedicated to promoting respect for international humanitarian norms in situations of violence, issued a Deed of Commitment to encourage non-state armed groups to pledge to protect and respect health care in conflict zones, and to agree to performance monitoring.

Despite these positive steps, violence continues to escalate. The report shows that little definite action has been taken to protect health providers and civilians.

“In the three years since the UN passed Resolution 2286 to protect health in conflict, attacks on health facilities and health personnel have continued with utter impunity. It’s high time for the international community to demand accountability for these heinous crimes,” said Susannah Sirkin, Director of Policy at Physicians for Human Rights, in the press release for the report.

Recommendations included in the report call on states in conflict as well as national and international governments outside of conflict zones to do more to protect health workers and ensure access to health care.

“Militaries can require their soldiers to respect “no weapons” policies of hospitals and train soldiers to facilitate passage of wounded and sick people at checkpoints,” Rubenstein told Health Policy Watch. “They should investigate cases where soldiers or militias attack or interfere with health care and discipline those who violate the law. Governments should reform counter-terrorism laws to permit doctors and nurses to treat everyone in need of care.”

The report demands that states in conflict strengthen military doctrine and training around the treatment of health care professionals and institutions, as well as reform laws that permit denial of health care to enemies. Improvement of investigation and accountability mechanisms for those who commit attacks is another vital step toward curbing violence.

The report also states that the UN Security Council and UN Secretary-General should take steps to ensure that investigation and accountability procedures at the international level take place to properly deal with states that fail to deal with violent attacks.

The Safeguarding Health in Conflict Coalition consists of 40 organizations working to protect health workers and services threatened by war or civil unrest. The Coalition pushes governments and United Nations to protect the security of health care all over the globe.