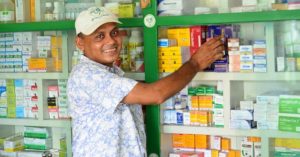 Originating from ministries of health around the world, UN bodies, academia and other public organisations these are the members of the UN Interagency Coordination Group (IACG). They have been tasked with coming up with ‘practical guidance for approaches needed to ensure sustained effective global action to address antimicrobial resistance’. They will present recommendations to the Secretary-General in May next year ahead of the 74th United Nations General Assembly (UNGA) from whence they, as the IACG, will cease to exist.

The IACG was established by the Political Declaration of the High-level Meeting on Antimicrobial Resistance (Resolution A/RES/71/3) and adopted three UN General Assemblies ago.

Today, the experts are in the process of synthesising a great number of responses to six consultation documents put up for deliberation during the summer.

The documents looked at all aspects of the AMR problem. Indeed, individual sub-working groups have been working on six separate topics that were turned into consultation documents since March; optimising the use of antimicrobials, national access plans, surveillance and monitoring for antimicrobial use and resistance, from communication to collective action. Importantly, papers also focused on future global governance for antimicrobial resistance and lastly, Investing in innovation and research, boosting R&D and access.

The papers reflect the cross-border and global challenges of AMR, and discuss coordinated policies needed to prevent a post-antibiotic era. Dr Soumya Swaminathan, deputy director-general at the WHO commented in a Citizen News Service webinar last week on the scale of the work, which includes the WHO, World Organisation for Animal Health (OIE) and the Food and Agriculture Organization of the United Nations (FAO).

“We are part of the tripartite working together along with experts and member states to really look at what can be done very holistically in the area of AMR,” she said.

Much work has already been done to understand where things need to change, especially on a national level, she said: “We need to act on several fronts simultaneously.” She mentioned policies including implementing infection prevention and control in healthcare centres, guidelines for the use of antibiotics so that all healthcare workers, reserving antibiotics for when they are really needed, banning antibiotics as animal growth promoters and preventing antibiotics factories irresponsibly disposing of waste products.

The IACG consultation papers attracted a large and wide-ranging response from around the world, said Dr Haileyesus Getahun, the coordinator of the IACG Secretariat.

“The group has looked at each and every comment,” he told Health Policy Watch, and is now entering a critical phase, which involves systematically and critically analysing all the information within each sub-group.

The plan is to release the draft recommendations by January for public consultation. Getting as much buy-in from the community as possible is critical so that things begin to happen, he said.

Critics say the IACG has its work cut out for it, providing extra value, given just how many groups have already looked at the problem over recent years; economist Lord Jim O’Neil held an AMR review for the UK government, the German government and the Organisation for Economic Co-operation and Development have also conducted research, among many others. Added to that, a range of organisations are focused on AMR, from WHO and JPIAMR (Joint programming initiative on AMR, an EU research initiative) to the Global AMR R&D Collaboration Hub, launched in May at the World Health Assembly.

He would not comment, however, on what the recommendations might encompass. “The independence of the group in its own right means it can give whatever recommendation it wants,” he explained.

That said, the consultations asked many questions, including: whether the mandates of existing access mechanisms, such as Global Fund for AIDS, Tuberculosis and Malaria, and GAVI, might be expanded to include AMR or whether to create a new one; which incentives and de-linkage mechanisms might encourage more new drugs; and whether they should be coordinated at global, regional and national levels.

Another sub-group, which met at Leeds Castle in April, proposed a global governance model, consisting of several layers including a standing secretariat, and steering board and that a global, multi-stakeholder agreement – such as a treaty – might be reached within a decade.

Kevin Outterson is Professor of Law and Executive at Boston University and director of CARB-X, a partnership to fund and develop new antibiotics. He welcomed the IACG efforts but says things must speed up as much of the ground has been covered already.

“We’ve never seen such powerful mobilization against AMR, at so many levels. We are all very grateful, but I am not looking forward to another report,” he told Health Policy Watch. “We have had many excellent reports on the next steps, with broad consensus around the need for a significant pull incentive for highly innovative antibiotics.

“Let’s focus like a laser on getting a pull incentive up and running in a major market in the next 2 years,” he said. “It is time for action.”

Respondents came from member states, pharmaceutical companies, NGOs, academic institutions and individuals and have all been published on the IACG website, said Dr Getahun. In her statement, Dr Susanna Müller at the German Federal Ministry of Health said, for example, Germany was not supportive of any attempt at creation of new supranational R&D funding entities nor of mandatory financial obligations for donor countries.

Several countries remained uncertain about the need to create new body to oversee AMR coordination. A statement from the UK government said: “The establishment of a new standalone structure or body hosted within the UN system is likely to come at significant cost, and there is a risk that its objective of establishing a formal international agreement on AMR may not be met. It may also paradoxically lead to a slowing of progress in the meantime, whilst such an agreement is negotiated.” Canada said aiming for a Global Multi-Stakeholder Agreement in 10 years is ambitious but more realistic than other proposals that have been made in the past.

Sweden said funding for global governance mechanisms should not necessitate additional obligatory financial contributions from member states. Rather, linking AMR to the global development agenda should be coupled with efforts to mobilise funding from within existing budgetary frameworks.

The South Centre said hosting a lean and efficient secretariat within an existing UN agency presents less of a challenge than creating a new body. It emphasised the importance of costing the new endeavour and learning lessons from other similar set-ups, such as the creation of a stand-alone structure such as UNAIDS or a hosted structure such as the UN Interagency Task Force on NCDs. It recommended the governance model should be an agreement amongst governments with multi-stakeholder participation, as opposed to a multi-stakeholder agreement.

On the question of how incentive mechanisms should be designed and coordinated at global, regional and national levels, R&D funder Wellcome Trust said, “This diversity of initiatives, in addition to the role of global groups such as the G20, can be considered to already provide an adequate basis for establishing the type of global coordination of incentive mechanisms outlined.”

Wellcome Trust added, “The IACG should consider how and where the roles of these existing bodies and initiatives can be extended, and how any ongoing UN process for overseeing a global response to AMR can complement and strengthen their work, rather than duplicate it.”

It said that if pull mechanisms are introduced to incentivise private investment in antibiotic development, they should be contingent upon adherence to strong access conditions.  It said: “Mechanisms such as the MPP should be supported to explore whether they can apply their model to increase access to antibiotics, and funded to deliver this work if it is feasible,” it said.

There have been questions as to whether some views, from smaller NGOs, philanthropic and companies will not be heard amongst the better-resourced and more high-profile organisations.

One observer said smaller biotechs, which are doing the lion’s share of the new drug research now, cannot afford to put together the kind of response big Pharma can, but does not represent them. Dr Getahun agreed that it had been a challenge but said several face-to-face meetings and questionnaire surveys had been held, plus consultations with alliances of smaller organisations such as the BEAM alliance. “So in short, IACG has already listened their voices and integrated it in its deliberations,” he said.

So, as the deliberations continue, there remain many important questions that need to be answered, said Dr Ursula Theuretzbacher, a respected independent consultant looking at R&D in AMR. For instance, the scale of adequate reimbursement that would incentivise companies to make new drugs.

“We need to use our tax-payers money in the most effective way. And I don’t think that we can incentivise big Pharma,” she said. “It would need such high amounts to be effective, that it would be difficult to justify.”

Theuretzbacher reckons more innovative alternatives beyond pure private sector R&D will be absolutely crucial. She said the Global Antibiotic Research & Development Partnership (GARDP), a joint initiative of DNDi and the WHO, that is developing new treatments, is one good model.

Related
Influential WHO Committee Greenlights Initiative for ‘Replenishment Fund’ to Bolster Finance
WHO Executive Board
Africans Struggled to Get COVID-19 Tests – What Must Change Before the Next Pandemic?
Drug & Diagnostics Development
WHO Announces New TB Vaccine ‘Accelerator’ at Davos as High-Level Panel Discusses Elimination Challenge
TB, Malaria & Neglected Diseases

Related
Influential WHO Committee Greenlights Initiative for ‘Replenishment Fund’ to Bolster Finance
WHO Executive Board
Africans Struggled to Get COVID-19 Tests – What Must Change Before the Next Pandemic?
Drug & Diagnostics Development
WHO Announces New TB Vaccine ‘Accelerator’ at Davos as High-Level Panel Discusses Elimination Challenge
TB, Malaria & Neglected Diseases