SINGAPORE – Last Saturday, a day after Singapore raised its disease outbreak response alert for COVID-19 from yellow to orange as the first cases of local transmission of the virus were confirmed, supermarkets found themselves besieged by customers piling carts full of instant noodles, rice and toilet paper, among other essentials.

“As there are now a few local cases without any links to previous cases or travel history to China, we have stepped up our risk assessment from DORSCON Yellow to DORSCON Orange,” stated the Ministry of Health announcement, referring to its sophisticated disease outbreak alert system, which includes four public health preparedness levels – from green to the highest level of red.

“What if it gets worse?” said the more fearful, a succinct verbal summary of the Singaporean concept of “kiasi”— a self-deprecatory, half-joking, self-assigned, stereotypical response that literally translates to “scared to die”.

But, as suddenly as panic buying spiked, it vanished almost overnight.

“Was at the largest NTUC Fairprice [supermarket chain] in my estate – and happy to report that the ‘zombie-apocalypse’ crowd is gone,” observed one Singaporean cheerily on her Facebook page, on Sunday afternoon.

Local memes poking fun at the panic buyers and the more creatively-masked commuters and consumers made their rounds on social media, even as hand sanitiser and surgical masks flew off shelves and hours-long queues formed at retailers that still had items in stock.

In all available communication outlets, government ministers repeatedly assured the public that the country had more than sufficient “national stockpiles” of essential items, one of many responses in a steady stream of public announcements about both emerging details of the virus and appropriate behaviour.

The government has also had to reckon with rampant misinformation spreading by social media in one of the most connected, device-loving nations in the world, this week having to dispel rumours of emerging evidence that COVID-19 was “”airborne”.  In fact it is transmitted by droplets, which can be transmitted to others by coughing, sneezing or heavy breathing, or by touching a contaminated surface, but not merely as viruses hurtling through the air on their own. 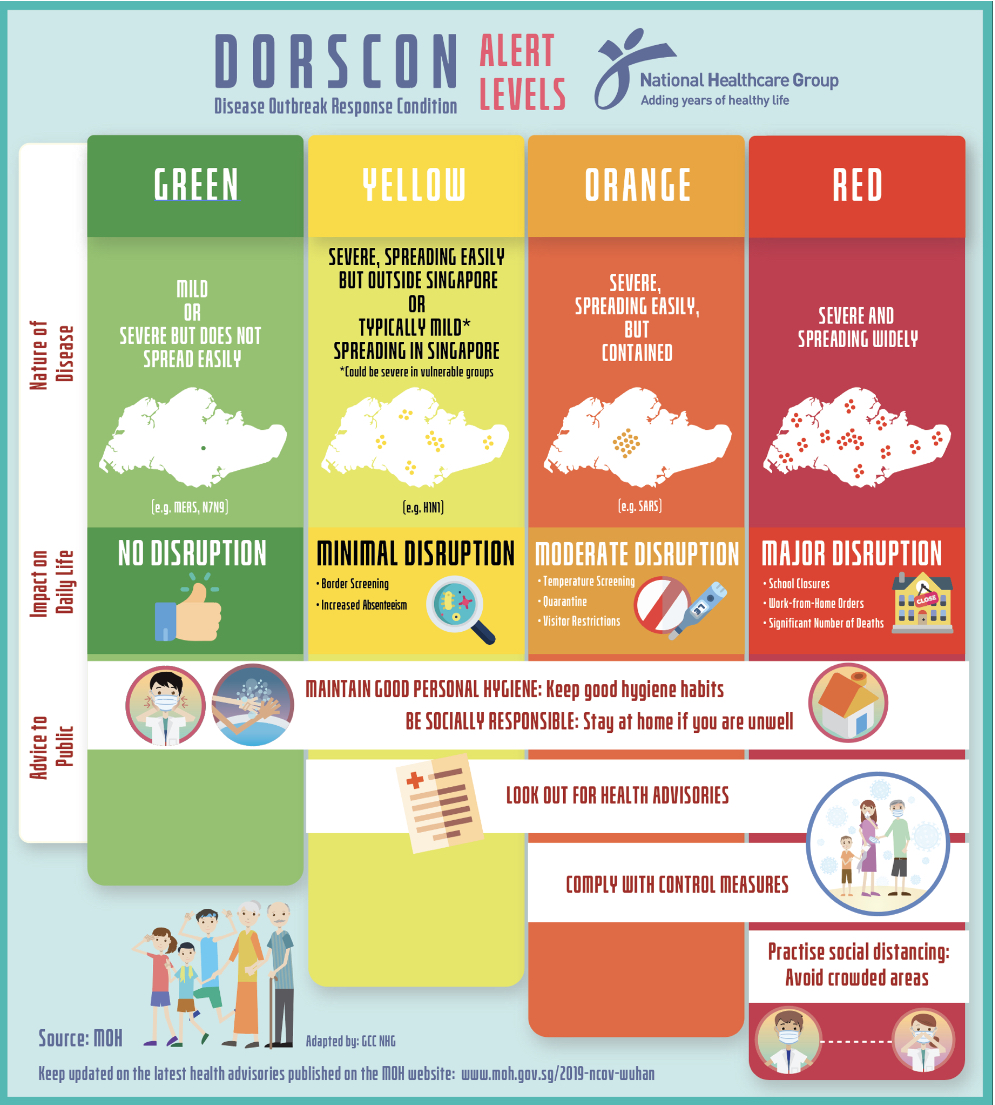 Yellow is the same DORSCON level the the Ministry announced 17 years ago when the SARS outbreak gripped the small, densely-populated island state, but much has changed since then— among the new developments, almost everyone has an unverified theory gleaned off social media about the virus, its spread, its epidemiology, its origins, its development, and how to protect oneself.

But while social media can fuel darker knee-jerk reactions driven by peer pressure, it also means public scrutiny can be equally swift.

Just this week, unsettling echoes of the SARS outbreak sounded.  There were firsthand accounts of nurses working at Tan Tock Seng Hospital – the main hospital treating infectious diseases – being shunned emerged on social media. People reportedly gave a uniformed nurse a wide berth on public transport and refused to share an elevator with another, snapping at her to take the stairs. Another nurse posted a screenshot showing that her rideshare driver cancelled her trip because her destination was the hospital.

But in the same breath, these posts attracted tens of thousands of outraged messages directed at the bad behaviour, and expressing support for healthcare workers.

The quality of the fear now is a faint shadow of what SARS evoked in 2003, an epidemic in which some 238 Singaporeans became ill and 33 Singaporeans died, many of them health care workers. Back then, among other things, taxis refused to pick up nurses outside that same hospital and buses wouldn’t stop for them to alight or board at bus stops in the area – which people avoided like the plague. The public scrambled to avoid nurses on trains,  buses, shopping plazas, food courts, and lifts.

This time, it’s just about business-as-usual, and one gets the sense of a well-oiled machine borne of the SARS experience: at peak hour for appointments at Tan Tock Seng Hospital, patients and visitors, wearing a motley of masks, are funneled via long but reasonably fast-moving queues at a number of selected entrances.

The entrances are teeming with masked, triaging staff, who direct the public to QR codes stuck on walls on the way in. These lead to a declaration page in a browser, with the usual questions (travel history, flulike symptoms) and a requirement to leave contact details. The queue fans out to a number of temperature-taking stations. If you pass, you get a sticker dot, a process repeated at the door of the specialist centres where normal medical appointments still continue.  Or, you can go online with a question regarding COVID-19, and a Ministry of Health bot will pop up to give you some answers.

Schools so far remained open this time around. They closed for a fortnight during SARS, and upon reopening, every schoolchild was given a thermometer and temperature-taking was scheduled each morning at school assembly.

To date, Singapore has 67 confirmed cases of the virus, with 764 having tested negative for COVID-19, and 91 cases still awaiting test results.

Contract tracing has uncovered links between previously announced and new cases— a process the Ministry of Health says was made possible with the assistance of the Singapore Police Force.

Five main clusters have emerged: two churches, a Chinese health product shop, a private business meeting held at a major hotel in the city centre, and a construction site.

But not all chains of transmission have been charted— contact tracing is still in progress for nine locally transmitted cases. And even a few such uncharted cases pose concerns to public health officials who aim to prevent the wider “community-based transmission” of the virus where containment of individual cases and the outbreak would become impossible.

Nonetheless, even as Singapore steps up measures to contain the virus, including increased cleaning in public places, Health Minister Gan Kim Yong stated at a press conference that there were no plans to further raise the current alert level.

“I want to say categorically that we have no plans to go to DORSCON red,” said Mr Gan, who co-chairs a multi-ministry task force with National Development Minister Lawrence Wong.

The government expects that the economy is likely to take a significant hit, but is trying to minimise retrenchments, if any, due to the virus.

The tourism industry, taxis and rideshare drivers are all feeling the pinch of government-imposed travel and visa restrictions which have severely limited incoming visitors from China, who make up a large proportion of the market. The local population remains cautious; crowds at some malls in the city last weekend were noticeably thin, after the orange alert. But the spectre of COVID-19, so far significantly less deadly than SARS (though more contagious), has not held Singaporeans in the same thrall.

And on Valentine’s Day evening in a busy mall hub on the city fringe, life went on—with long queues outside restaurants. The only clue that anything has changed was the fact that some of the faces of friends, families and couples standing in line were covered by masks.

Jade Lee is a Singaporean journalist, living and working in the city.