Madrid, Spain – Countries lack capacity and even more important, the money, to incorporate health factors into their climate action strategies – even though increased disease and deaths are one of the most immediate outcomes of climate change.

This is the key finding of a first-ever report by the World Health Organization that looks at how national health systems are responding to climate-related health threats that are affecting countries more frequently and with greater intensity, including food-borne and water-borne as well as vector-borne infectious diseases, as well as heat stress and extreme weather events.

The report, The WHO Health and Climate Change Survey Report – Tracking Global Progress – surveyed 101 countries, from high- to low-income economies across all regions of the world.

The findings show that while nearly half of the countries surveyed had developed a national health and climate change strategy or plan, less than one-fifth reported a high level of plan implementation, and fewer than 10% of countries said that they had resources to fully implement their plans. 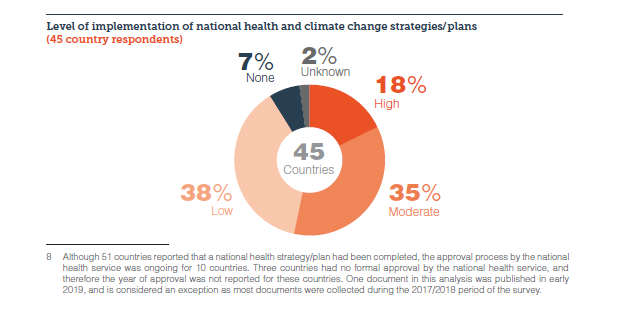 “Countries are exposed to climate risks, they are vulnerable to health impacts and they are not receiving the support they need in order to protect people’s health,” said WHO’s Diarmid Campbell-Lendrum, speaking at a press conference here on Tuesday, the second day of the UN Climate Conference in Madrid (COP25).

In addition to the direct impacts of climate change, Campbell-Lendrum noted that some 7 million people annually die from air pollution every year, “roughly the whole population of Madrid” and those deaths are “very closely linked to the climate crisis, as about two-thirds of the outdoor air pollution we experience is from  fossil fuel combustion.”

WHO has estimated that cutting carbon emissions to meet the climate goals of the 2015 Paris Climate Agreement could save about a million lives a year worldwide by 2050 through reductions in air pollution alone. And the economic benefits of the health gains would be more than twice that of the costs of carbon reductions, he said.

“Climate change is not only racking up a bill for future generations to pay, it’s a price that people are paying for now with their health,” said Dr Tedros Adhanom Ghebreyesus, Director-General of the World Health Organization, in a press release on the new report. “It is a moral imperative that countries have the resources they need to act against climate change and safeguard health now and in the future.”

Among the countries that did conduct a climate and health assessment, the most common climate-sensitive health risks were identified by countries as heat stress, injury or death from extreme weather events, as well as food-, water- and vector-borne diseases (such as cholera, dengue or malaria). However, about 60% of countries responding reported that their assessment findings have had little or no influence on the allocation of human and financial resources needed to protect health from climate change. 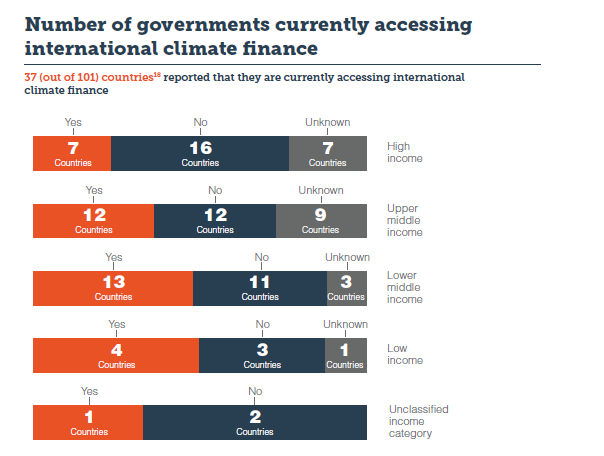 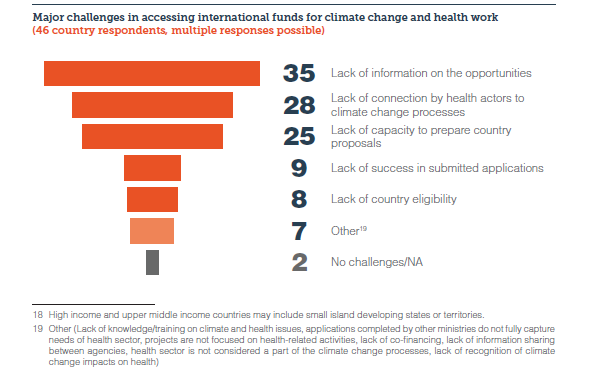 In terms of preventing future climate change, the report also notes that few countries have been able to take advantage of the synergies that exist between reducing carbon emission and reducing environmental contamination that harms health, particularly air pollution.

Fewer than 25% of countries surveyed reporting having clear collaborations between health sectors and other key sectors driving climate change, such as transport, power generation and domestic heat and power production.

Potential health gains that would result from cutting carbon emissions are rarely reflected in national climate commitments, with only one-fifth of Nationally Determined Commitments (NDCs) mentioning health in the context of emissions reductions and 1 in 10 NDCs specifically mentioning expected health gains.

The so-called “Nationally Determined Commitments,” the voluntary targets to which countries commit, are in fact the backbone of the 2015 Paris Climate Agreement that aims to keep climate change below 2°C and 1.5°C, if at all possible.

While two-thirds of countries’ NDCs mention health in general terms, and the health sector is among the five sectors most often described as vulnerable to climate change, when it comes to concrete action, health is just not factored into the equation, the WHO report concludes.

“For the Paris Agreement to be effective to protect people’s health, all levels of government need to prioritize building health system resilience to climate change, and a growing number of national governments are clearly headed in that direction,” said Maria Neira, WHO’s Director of the Department of Environment, Climate Change and Health, in the press release.

“By systematically including health in Nationally Determined Contributions – as well as National Adaptation Plans, climate finance pledges, and other National Communications to the UNFCCC [United Nations Framework Convention on Climate Change] — the Paris Agreement could become the strongest international health agreement of the century.”

Speaking at the press conference, Neira said that countries need to ensure that the health sector is included in climate change processes and that health ministries have the capacity and support to access the finance they need.

“The fact that the health impact is already felt by the countries but the finance is not reaching them,” said Neira, speaking at the press conference.

She added that the health sector was also calling on governments ” to be much more ambitious on tackling the causes of climate change because our health is at risk and our health is paying the price of not taking action on climate.”

While only 8 our of 45 countries reported a high level of implementation of national health and climate change strategies or plans, countries were being more proactive on certain issues. Some 61% of countries were implementing stronger systems of early warning and response to cope with flooding, 43% for heatwaves and 32% for air quality.

Although 48% of countries have assessed their public health risk to climate change 60% report that these findings have had little to no influence on the allocation of human and financial resources to meet their adaptation priorities for protecting health.

Half of the countries surveyed have developed a national health and climate change strategy or plan.  But less than 20% of countries reporting a high level of implementation.  Along with financing, other common barriers included: human resource constraints and lack of capacity, lack of prioritization; lack of multisectoral collaboration and a lack of tools, information systems and evidence for decision-making.

Only about 38% have national finances in place to even partially implement their national strategy of plan, and fewer than 10% have resources to implement it completely.

In terms of accessing international climate finance,  over 75% (35 of 46 respondents) reported a lack of information on opportunities, over 60% a lack of connection of health actors to the climate finance processes, and over 50% a lack of capacity to prepare proposals, the report found.

Campbell-Lendrum noted that the efforts need to be made by both the climate and health sectors to close the gap.  “The Green Climate Fund has identified health and well being as a focal area, they just haven’t funded any projects in that area yet.  So we need to work from both sides to make sure that the countries have the technical back- up to prepare their plans and then we have to be met from the other side.”

According to the UN Environment-hosted Climate and Clean Air Coalition, some countries have begun reporting on reductions of black carbon emissions – which are among the most health-harmful air pollutants – as part of their Nationally Determined Contributions (NDCs) to reducing climate change.

Unlike carbon dioxide, which persists in the atmosphere for hundreds of ;years, black carbon particles that are heavily emitted by diesel generators and vehicles as well as by primitive wood and biomass stoves, only remain airborne for a few days or weeks, and therefore reducing emissions can lead to rapid reductions in concentrations in the atmosphere.  Black carbon also comprises a significant portion of small particles, or PM2.5,  regarded as one of the most health-harmful air pollutants.

A 2018 report by the Intergovernmental Panel on Climate Change (IPCC), underlined that reducing emissions of black carbon and other so-called short-lived climate pollutants, such as ozone and methane, could help slow down the pace of climate change, buying the world critical time to shift to cleaner energy technologies.  However, many countries still lack the tools and awareness to clearly and quantitatively link their carbon reductions with reductions of black carbon and other air pollutants.

Conversely, the so-called health co-benefits that may be derived from climate action are not typically factored into climate assessments and financing processes, which right now focus on quantifying carbon emission cuts, as such, without regard for savings in lives or related health costs.

This article was published as part of Covering Climate Now, a global journalistic collaboration to strengthen coverage of the climate story.