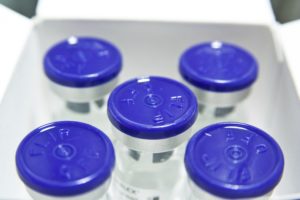 Cancer drug prices exceed those of medicines used for treating other major diseases, with costs growing at a faster rate, states the report, “Medicines, vaccines and health products; Cancer Medicines,” which is to be reviewed by WHO’s Executive Board in their January session.

An executive summary of the report was posted on 26 November to the WHO website here [pdf]. [Update 18 December: the full report is now available here [pdf].]

Cancer treatment thus remains unaffordable for many victims worldwide, who lack adequate insurance coverage. For instance, a course of standard treatment for one type of early stage breast cancer (HER2) would cost about 10 years of average annual wages in countries such as India and South Africa and 1.7 years in the United States.

The lack of access to vital cancer treatments is reflected in the sharp differences in cure rates in different parts of the world. Over 80 percent of children diagnosed with cancer in high income countries will be cured of the disease, in contrast with only a 10 percent cure rate in some low- and middle-income countries, the report notes.

The report, involving a wide-ranging literature review as well as stakeholder consultations and expert review, examined pricing approaches adopted by the pharmaceutical industry as well as national authorities, finding that both have been ineffective in limiting soaring costs and expanding access to affordable drugs.

Cancer is one of the world’s greatest global health challenges, with a rising burden estimated at 18.1 million new cases and 9.6 million deaths in 2018.

The study made detailed comparisons of pricing approaches in different countries worldwide and throughout the value chain – from initial research and development to production and marketing, and after patents expire, the entry of generic products into the market.

“Overall, the analysis suggests that the costs of research and development and production may bear little or no relationship to how pharmaceutical companies set prices of cancer medicines,” the report concludes. “Pharmaceutical companies set prices according to their commercial goals, with a focus on extracting the maximum amount that a buyer is willing to pay for a medicine. This pricing approach often makes cancer medicines unaffordable, preventing the full benefit of the medicines from being realized.”

As patents reach expiration dates, cancer drugs are ripe for tactics to delay generic product entries or “product hopping”, shifting to a modestly reformulated product that offers little or no therapeutic advantages in order to preserve market exclusivity, the report found.

The report was hailed by civil society groups long concerned with drug pricing.

“For 99 drugs, average income return by end 2017 was US 3.30 to US 55 for every US 1 of R&D spending” tweeted James Love, director of Knowledge Ecology International. Others highlighted the fact that even medicines developed with public subsidies, later remain unaffordable to consumers.

“They see a need to clarify whether the public has been “paying twice”, or should be paying twice, for medicines developed with at least partial support from public resources,” tweeted another advocate, about the report.

Policies that facilitate price competition among pharmaceutical companies, and support generic substitution, have generally led to lower prices, the report finds. However a wide range of factors continue to limit the extent to which competition can really drive pricing and increase access.

Even in countries that aggressively sought to manage prices, costs of the newer cancer medicines have continued to grow substantially in recent decades. The report recommends a menu of options for further reducing average costs and expanding treatment access including: